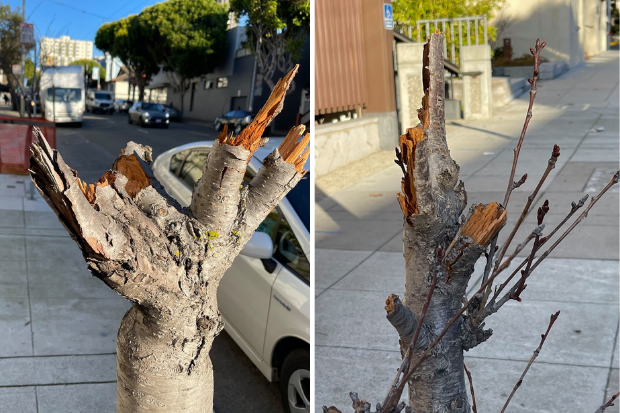 A pair of the famous cherry blossom trees in San Franciso’s Japantown in the United States have been destroyed for unknown reasons.

Still-unidentified vandals hacked the branches off the said trees, which adorned the front of the Japanese Cultural and Community Center of Northern Carolina (JCCCNC) building, the cultural center disclosed on Facebook on Jan. 7.

“No cherry blossoms to bloom this year… The trees were destroyed down to the trunk. Not one branch was left on any of the trees,” the JCCCNC lamented.

UPDATE: We have created a GoFundMe campaign to raise funds to replace the cherry blossom trees. We greatly appreciate…

The said trees were planted back in 1994 to commemorate the visit of the emperor and empress of Japan at the time, according to the cultural center.

“This was not simply a passerby trying to break a branch off for fun. Someone took their time breaking off every branch. This was no easy task as some of the larger branches were over 3” thick and the trees 12’ to 15’ feet high,” executive director Paul Osaki said.

This incident is unfortunately not the first, however, as the community center noted that a cherry blossom tree was also vandalized in a similar fashion two years ago.

“The Cherry Blossom trees were the first to be planted in San Francisco’s Japantown in over fifty years since the Redevelopment Agency uprooted every tree in Japantown during the [1960s to 1970s],” the JCCCNC noted.

Osaki also shared that security footage showed that the vandalism took place over the span of three days, beginning on Jan. 1 while the center was closed, as per New York Times yesterday, Jan. 8.

“I don’t know if it was hate-motivated, but it was certainly targeted,” Osaki was quoted as saying.

The JCCCNC has since created a GoFundMe campaign to raise funds to replace the destroyed cherry blossom trees.  /ra