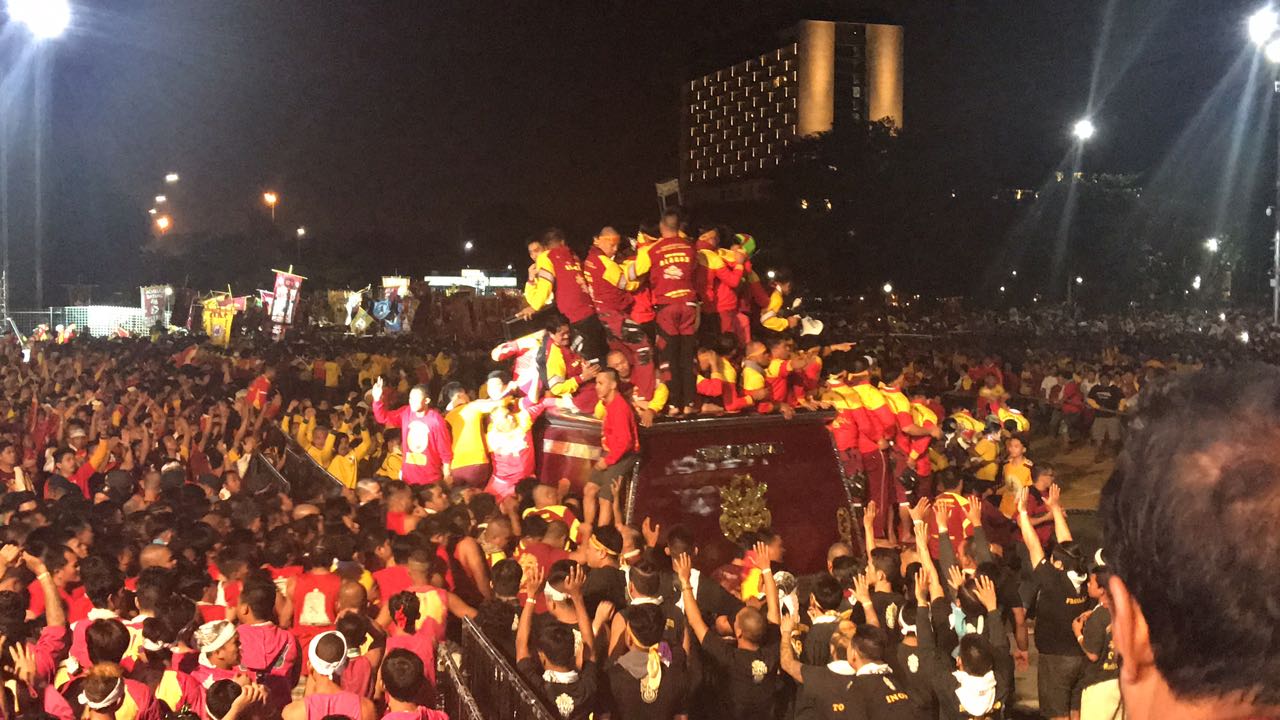 (FILE) The mayhem that accompanied the start of past Traslacions was absent in this year’s send-off at the Quirino Grandstand on Jan. 9, 2018, as devotees of the Black Nazarene were more organized and peaceful, according to Rev. Fr. Douglas Badong of the Quiapo church.

MANILA, Philippines — Every year, the Traslacion, or the annual grand procession of the image of the Black Nazarene, draw in throngs of barefooted devotees hoping to lay a touch on the venerated image and to be granted a miracle.

For this year, however, church officials and the Manila City government have decided that the grand procession will not push through because of the continuing threat of the coronavirus disease (COVID-19).

Likewise, traditional rituals such as the “pahalik” (kissing of the image of the Black Nazarene) are replaced by the “pagpupugay” (paying tribute) and “pagtanaw” (viewing of the image) to prevent the spread of the coronavirus disease (COVID-19) among devotees

According to Alex Irasga, head of the Traslacion working committee, instead of having the annual procession, there will be a total of 15 Masses for the whole day.

Only 400 persons, however, will be accommodated per mass.

To give a detailed view of how different this year’s celebration of the Feast of The Black Nazarene is to the festivities conducted in 2018, 2019, and 2020, here are some things that happened during the previous editions of the Traslacion:

According to police estimates, around 4.5 million devotees attended the Traslacion, 2 million more than the number of devotees who attended in 2017.

The Manila Police District (MPD) deployed at least 7,000 personnel for the procession, with around 2,500 securing the 363,000 devotees at the Quirino Grandstand.

By the end of the festivities, the Philippine Red Cross (PRC) said that more than 800 devotees were injured during the procession.

Seven patients were transported to nearby hospitals, including a 17-year-old boy who has suffered a spine and neck injury after falling from the andas.

The MPD Criminal Investigation and Detection Unit also reported that a 51-year-old devotee who attended the Traslacion died of a heart attack.

In 2019, the Traslacion ended one hour earlier than the previous year. After over 21 hours since the procession began around 5:08 a.m., the image of the Black Nazarene reached the Quiapo Church past 2 a.m. on January 10.

Around 7,200 police personnel were deployed in 2019 to ensure the safety of devotees.

Eleazar also noted that the feast was generally peaceful with only one pickpocketing incident reported.

However, 12 hours after the andas left Quirino Grandstand, a devotee and other participants were seen having a fistfight alongside the procession near Vergara Street.

Meanwhile, PRC recorded 781 devotees that were given medical assistance. Of the sum, 545 individuals got their blood pressure monitored, 224 suffered minor ailments such as difficulty of breathing, fainting, punctures, abrasion, bruises, toothache, sprain, nose bleeding, among others.

Only eight patients required major treatments due to laceration, difficulty of breathing, and dizziness.

The Traslacion left 43 truckloads of trash in the streets of Manila, the Metropolitan Manila Development Authority (MMDA) said.

The Traslacion last year was, in many ways, different from the previous celebrations.

Days before the Traslacion, Quiapo Church Rector Msgr. Hernando Coronel announced that instead of passing through Jones Bridge, the andas and devotees will cross the Pasig River using the Ayala Bridge.

According to Coronel, the Department of Public Works and Highways (DPWH) had recommended for the Traslacion to traverse Ayala Bridge since it was the safest and most durable route for the day-long procession.

In a bid to stop the fervent crowd of devotees from blocking the front and sides of the carriage, over 2,000 policemen acted as a massive “andas wall,” surrounding the venerated icon.

However, devotees expressed frustration over the increased police deployment and the so-called “andas wall.” Devotees complained that the barricade deprived them of the chance to fulfill their yearly devotion.

It was also during this year when the Commission of Human Rights (CHR) condemned the “unnecessary force” used by the police during the procession.

This is due to an incident where a Southern Police District chief allegedly took the cellphone of veteran GMA reporter Jun Veneracion as he was documenting a commotion between policemen and devotees of the Black Nazarene.

On the other hand, while the crowd of devotees was clamoring to touch the religious Black Nazarene image, a couple got engaged in the midst of chaos

According to a Tweet by the Manila Public Information Office (MPIO), Kim Noel Yamat said he proposed to his girlfriend Mary Joie Flores during the Traslacion since they are both devotees of the Black Nazarene.

The Traslacion 2020 finished with a record-breaking time of 16 and a half hours. It started at the Quirino Grandstand around 4:20 a.m., earlier than usual, and arrived at Quiapo Church at around 8:50 p.m.

The PRC catered to a total of 1,090 individuals during the Traslacion. Of those treated, 15 were transported to nearby hospitals either due to hypertension, fracture, or loss of consciousness.

Another 26 major cases aided by PRC’s staff and volunteers complained of the difficulty of breathing, head injury, laceration, and elevated blood pressure.

There were 68 truck loads or 330 tons of garbage collected by the Manila Department of Public Services after the event. The MPIO noted that the number was relatively lower than last year’s record of 99 truckloads or 387.4 tons.

EXPLAINER: Why is the annual celebration of the Black Nazarene called a feast?