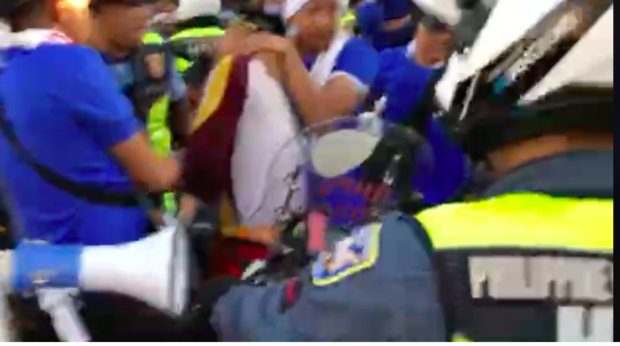 MANILA, Philippines — The chief of the Southern Police District (SPD) of the National Capital Region Police (NCRPO) allegedly took the cellphone of veteran GMA reporter Jun Veneracion as he was documenting a commotion between policemen and devotees of the Black Nazarene on Thursday.

“While taking footage on my phone of a commotion between cops and a hapless Black Nazarene devotee on Ayala Bridge in Manila, a police general suddenly darted out of nowhere and snatched my mobile unit. He quickly moved away from the scene,” Veneracion said in a Facebook post.

In the video, a man was seen being dragged to the ground as a group of policemen were trying to put a handcuff on him. At this point, the focus of the camera was pulled out of the scene and instead showed the feet of a policeman wearing the uniform of a commissioned officer before the video blacked out. The offense of the man was not immediately clear as of posting time.

Veneracion said he was then accosted by another police officer, stopping him from going after the police official who took his phone and from getting his name.

“But one thing stood out: I saw a star on his shoulders,” he said.

Minutes later, photojournalists also covering the procession spoke to Veneracion and pointed at the police official who got his cellphone.

“The culprit turned out to be one of the district commanders of the NCRPO—B/Gen. Nolasco Bathan,” Veneracion said.

He then asked Bathan why he took away his cellphone but the SPD chief, “fuming mad,” even allegedly threatened to confiscate his handheld radio.

Veneracion said he backed off to let the police official calm down. Then he approached the official to ask for his phone.

This time, Bathan apologized and claimed he did not recognize the reporter, and then finally returned the cellphone.

When checked, the video of the commotion had been deleted.

Veneracion then asked Bathan why the footage disappeared from his phone’s gallery but the police general denied deleting the video, saying even the Black Nazarene could be his witness.

“Apparently, someone forgot to switch off the record button,” Veneracion wrote.

“At the tail end of the recording, a voice can be heard: a man giving instruction to someone. ‘Burahin mo, burahin mo kuha ni Jun Veneracion. Pu#!#! ina nagku-kwan eh,’” he added.

INQUIRER.net has sought comment from Bathan but he has not responded as of posting time.