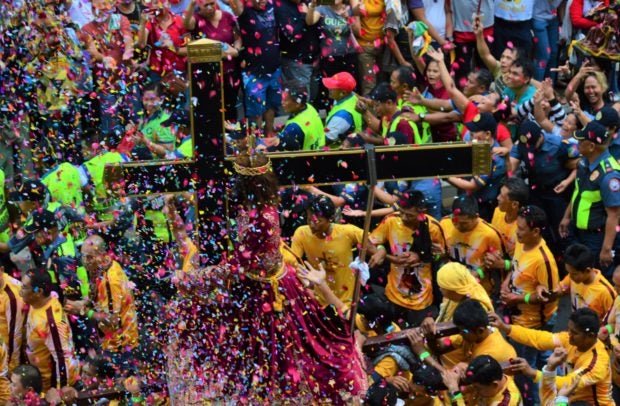 MANILA, Philippines — Considered as Asia’s biggest religious events, the annual Traslacion, or the procession of the icon of the Black Nazarene, draws in throngs of barefooted devotees hoping to lay a touch on the venerated image believed to grant miracles to the faithful.

This year was no different as the religious fervor of one of the largest Catholic nations in Asia showed no signs of dwindling.

Over 148,000 flocked to the Quirino Grandstand hours before the Holy Mass for the yearly Traslacion kicked off.

A sea of devotees clad in deep yellow and maroon shirts filled the Quirino Grandstand as His Eminence Luis Antonio G. Cardinal Tagle led the early morning Mass where he urged Filipinos to make use of “gifts” to fulfill the Lord’s mission as devoted servants.

The “andas” bearing the image of the Black Nazarene started to inch its way toward its destination past 4 a.m., which is earlier than expected.

In a bid to stop the fervent crowd of devotees from blocking the front and sides of the carriage, over 2,000 policemen acted as a massive “andas wall,” surrounding the venerated icon.

As the Black Nazarene icon approached the Ayala Bridge, a tweak from the usual Jones Bridge, devotees were able to penetrate the “andas wall.” 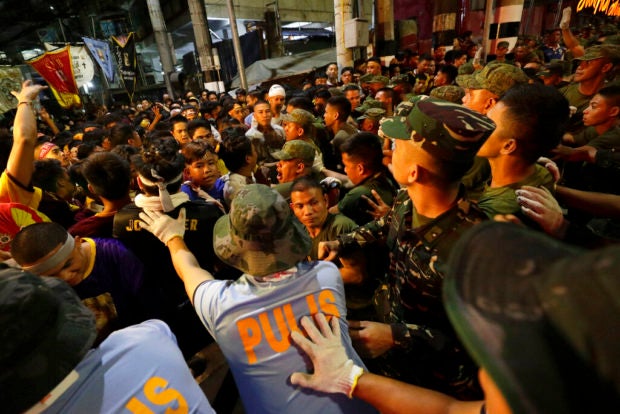 Filipino Roman Catholic devotees are pushed by police and military as they try to break the barriers to go near the carriage of the Black Nazarene during a raucous procession to celebrate its feast day Thursday, Jan. 9, 2020, in Manila, Philippines. A mammoth crowd of mostly barefoot Filipino Catholics prayed for peace in the increasingly volatile Middle East at the start Thursday of an annual procession of a centuries-old black statue of Jesus Christ in one of Asia’s biggest religious events. (AP Photo/Aaron Favila)

Devotees also complained that the police barricade deprived them of the chance to fulfill their yearly devotion.

The barbed wire on the beams of Ayala Bridge, which police installed to prevent devotees from climbing its metal frames, also drew mixed reactions as some netizens earlier pointed out that it may cause harm.

Devotees also kept over 1,000 volunteers of the Philippine Red Cross (PRC) busy as their latest data showed that over 1,000 individuals were given medical assistance since the start of the procession.

Majority of this number were given blood pressure consultation while nearly 300 devotees suffered from dizziness, shortness of breath, elevated blood pressure, abrasion, laceration, and sprain.

This year’s Traslacion pulled in more than three million devotees, according to the Manila Public Information Office (MPIO).

A showcase of faith, love

While the crowd of devotees were clamoring to touch the religious Black Nazarene image, a couple got engaged in the midst of chaos

Kim Noel Yamat said he proposedto his girlfriend Mary Joie Flores during the Traslacion since they are both devotees of the Black Nazarene, according to a tweet by the MPIO.

Police earlier eyed cutting the procession time in half to lessen the risks of possible criminal and terrorist acts. They also changed the route due to safety issues with the bridges originally used in the Traslacion in previous years.

For this year’s Traslacion, the procession crossed Pasig River through the Ayala Bridge instead of the usual Jones Bridge, which meant for a shorter trip overall.

The long-winded journey of the Black Nazarene icon ended in record time, with it only lasting for more than 16 hours. This is five hours shorter than the 21 hours recorded in 2019.

The image arrived at Quiapo Church at 8:49 p.m.