Black Nazarene back in Quiapo Church after 22-hour procession

After 22 hours since its procession began, the Black Nazarene statue was returned to its home, Quiapo Church at Plaza Miranda, at 3:00 a.m. on Wednesday, ending the grand Traslacion this year.

As the image was pulled into the church, devotees raised their arms, chanting, “Viva Poong Hesus Nazareno!”

Police had formed a barricade along the entrance of the basilica to ensure the quick passage of the Andas, or the platform carrying the statue.

At least 4.5 million devotees attended this year’s Traslacion – or about two million more than last year, according to police estimates.

However, contrary to the earlier prediction of Director General Ronald dela Rosa, chief of the Philippine National Police, the barefoot procession, which started at 5:30 a.m., lasted just as long as last year – 22 hours. 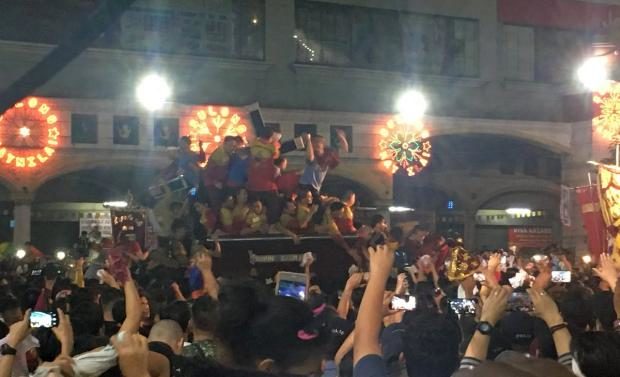 The Hijos del Nazareno struggle to pull in the Black Nazarene into Quiapo Church at a few minutes before 3 a.m. on Wednesday, Jan. 10, 2018. (Photo by KRIXIA SUBINGSUBING / Philippine Daily Inquirer)

Held every year on Jan. 9, the Traslacion is widely considered as one of the biggest religious events in Asia as millions of barefoot devotees follow the Black Nazarene hoping to get a chance to kiss, touch, or rub cloth on the icon.

In an interview with reporters at Quiapo Church on Tuesday afternoon, Dela Rosa said the “smoother” flow of this year’s procession was due to the changes introduced by police to ensure the safety of devotees.

Among these is the signal interruption of cellular services within a 1-km radius of the procession routes, as well as some of Manila’s neighboring cities, which Dela Rosa said was done to reduce terrorism threats.

The procession was generally peaceful, marked by zero casualties and more than 1,000 people injured mostly due to hypertension, according to figures from the Philippine Red Cross (PRC).

In its 1:00 a.m. report  on Wednesday, the PRC said more than 400 were reported injured from from over a thousand devotees it tended throughout the six-kilometer procession. /atm