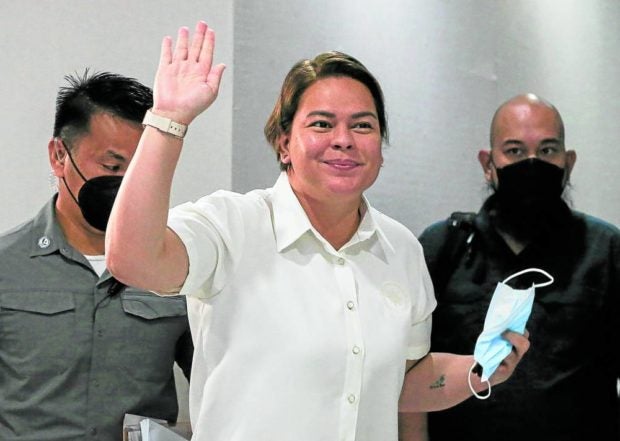 Duterte, whose sole constitutional mandate is to assume the presidency in case of a vacancy, had asked Congress to allot P500 million in confidential funds to the Office of the Vice President (OVP) and another P150 million to the Department of Education (DepEd).

Senate Minority Leader Aquilino Pimentel III and fellow opposition Sen. Risa Hontiveros had questioned the propriety of allotting confidential and intelligence funds (CIFs), pointing out that the OVP and DepEd, being civilian state agencies, were not entitled to such funding.

But Angara, who chairs the Senate finance committee, said he and the other members of the so-called “supermajority” in the Senate were inclined to accede to the Vice President’s proposed spending plan.

He argued that by appointing her to one of the biggest government agencies, President Marcos only showed that the daughter of former President Rodrigo Duterte was “an important part of his administration.”

“For me, it’s not good to take away the budget from someone who was elected by the people and was given the allotment by the President under his first-ever [national] budget,” Angara said in a radio interview.

“Let’s not deprive her office [of the confidential funds] because the people and the President want the Vice President to succeed,” he said.

While many of them were supportive of Duterte’s request, the administration senator said his fellow lawmakers were “more comfortable” with transferring the requested P150 million from DepEd to the OVP.

“It may be realigned. It’s also possible that it will be transferred to the OVP because [DepEd] is also under the office of Duterte anyway,” he added.

Unlike the education department, Angara said that OVP was concerned about the “entire bureaucracy and the whole country.”

“[Some of my colleagues] asked about what will happen to the funds if there will be a change in the leadership of DepEd. That fund will be left there,” Angara said.

“We know that the Vice President really needs that fund. So why not just put it [in the OVP]? That’s the opinion of some senators,” he noted.

Angara, who sponsored the proposed P5.3-trillion national spending plan, also pointed out that the country’s second highest elective official was also part of the “security establishment as Vice President.”

However, the Senate finance committee chair clarified that it would still be up to the entire 24-member chamber to decide if Duterte would have access to such lump-sum allotments, which are not usually subjected to the strict scrutiny by the Commission on Audit (COA).

Interestingly, the COA had previously flagged the Davao City government in 2017 for its questionable hiring of contractual employees, which was vaguely declared as “other general services,” when Duterte was still its mayor.

After wrapping up the marathon plenary deliberations last week, the Senate will start the period of amendments on Monday, with senators providing their respective changes in the general appropriations bill.

“That’s the process in a collegial body [like the Senate],” Angara maintained. “The decision does not come from just one person, but the entire collective.”

Pimentel had earlier said that he was hoping that his colleagues would heed the mounting public clamor against spending P9.3 billion in CIFs, nearly half of which will go to the Office of the President.

He insisted that CIFs should be deleted from the outlay of civilian agencies like the OVP and DepEd since they did not have a clear mandate to spend on intelligence operations.

Besides, the Senate minority leader said, the OVP would still be able to function even without such appropriation.

“I think the answer to that is very clear,” he said. “It should be able to survive [without the confidential funds].”