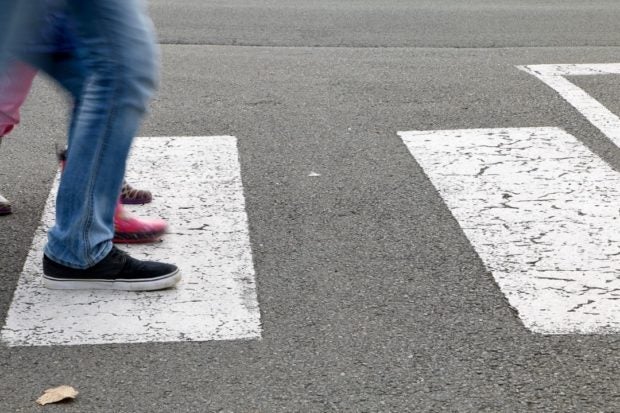 MANILA, Philippines — Hannah Marie Estapa was in fourth grade when her teacher instructed her to go home by herself as part of the training for visually impaired learners like her.

Using her cane as a guide, she safely made it to her house in Carmona, Cavite, unaware that her teacher was following her throughout the 20-minute journey.

“That experience served as an inspiration to me,” the now 16-year-old Estapa said during the commemoration on Sunday of World Day of Remembrance (WDoR) for Road Traffic Victims held at the Children’s Road Safety Park in Manila.

For her mother, however, the exercise was a cause for concern as she did not expect her daughter to be asked to travel between home and school by herself.

“The people in our community are child-friendly… but I was still scared that she might get hit by a car,” Carmi said in an interview, recalling instances in which she feared crossing roads with her blind daughter because of speeding vehicles.

“Sometimes there are jeepneys that would suddenly move even though we haven’t finished alighting from the vehicle yet so I end up shouting at the driver because my daughter is a PWD (person with a disability),” she added.

At the unveiling of a mural for WDoR, several groups called on the government to improve road infrastructure and build safer streets for children at great risk of dying from or being injured in road crashes.

One of these groups, public interest law group ImagineLaw, cited data from the Philippine Statistics Authority showing that 1,670 Filipino children and young people age 0 to 19 die annually due to road crashes.

On Sept. 15, a 4-year-old girl who was begging for alms was hit by a sport utility vehicle on Adriatico Street in Manila. She was brought to the Ospital ng Maynila where she was declared dead on arrival.

“Playing outside or commuting to school should not be a death sentence for children,” said Daphne Marcelo, ImagineLaw project manager for road safety.

She added that putting the blame solely on parents was “unproductive, misguided and myopic” because the government, community leaders, parents, teachers and road users all play a role in making streets safe for kids.

For Estapa, there should be legislation to integrate road safety into the school curriculum. “We’re not studying road safety in our school. Sometimes, [we talk about it] casually but there’s no direct discussion [about the topic],” she told the Inquirer.

She also said the government should allocate a budget for safe roads “not just for kids like me but for all.”

According to Estapa’s mother, it would be better if the government would install railings and even tactile paving, like the ones used in Baguio City, to help visually impaired people like her daughter.

While internationally accepted as a public space tool for the blind, the tactile pavements in Baguio City drew criticism after some residents complained that these became slippery during heavy rainfall.

“We should not pull back on our road safety campaign until we bring the number of Filipinos killed or injured from road crashes down to zero,” said Robert Siy of Move As One Coalition, a transport and mobility advocacy group.

“Our bikeways, rail projects, and road projects, we’ve made them PWD-friendly and we’ve made it easier for our fellow Filipinos, especially children, to travel,” he said.

“We will own up to our mistake … I am sad because we are here in an event that is supposedly for road safety and yet our own agency contributed to the death of one person,” he said.

Artes noted that the Land Transportation Office (LTO) has continued to provide seminars for those getting their driving licenses to ensure discipline and knowledge of traffic laws.

LTO chief Assistant Secretary Jose Arturo Tugade, on the other hand, emphasized the importance of the Department of Transportation’s Philippine Road Safety Action Plan which aims to avoid deaths due to road accidents.

“We see this roadmap for road safety interventions whose goal is to achieve zero deaths on the road as a vital component in implementing road safety to once and for all put an end to the torment experienced by families of road crash victims, not just financially but more importantly, emotionally,” Tugade said in a statement.

The National Day of Remembrance for Road Crash Victims, Survivors and their Families is in accordance with Republic Act No. 11468. It is intended to “ensure the protection and safety of people from any form of road hazards and to value human lives by way of remembering the victims of road crashes and recognizing the sufferings of their affected families and communities.”