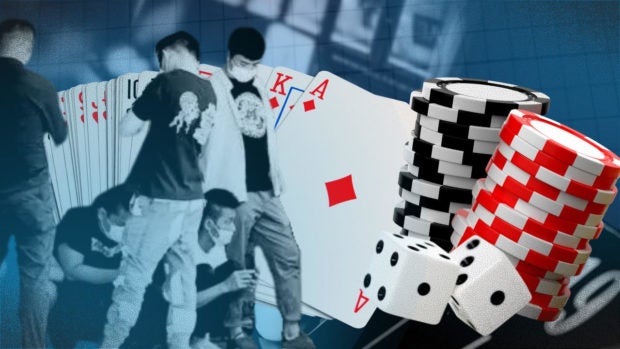 MANILA, Philippines—It was in 2016 when Philippine Offshore Gaming Operators (Pogos) first took off as then President Rodrigo Duterte pursued closer trade and investment ties with China, but six years later, a debate emerged: should they stay or not?

No less than Finance Secretary Benjamin Diokno asserted that the Philippines should already do away with Pogos because of what he described as “social cost and reputational risk.”

He even said the country can move forward without the industry as it had already seen a decline in income generation.

But economist and Albay Rep. Joey Salceda said a “blanket ban […] will be seen as arbitrary.”

Salceda stressed that it would be in the best interest of the government, which is in need of revenues to boost the economy hit by the COVID-19 crisis, to instead “keep Pogo operations within Pogo-specific zones.”

Randy David, a sociology professor emeritus at the University of the Philippines said in an INQUIRER column that Pogos “are foreign-owned and capitalized enterprises that run online gaming operations beamed to the global market using Philippine-based service providers.”

READ: Our dependence on Pogos must end

It was on Aug. 26, 2016 when the Philippine Amusement and Gaming Corporation (Pagcor) issued regulations for Pogos and said it would license operators “to safeguard the welfare of Filipinos [and] at the same time meet the agency’s revenue targets to help fund the government’s nation-building programs.” 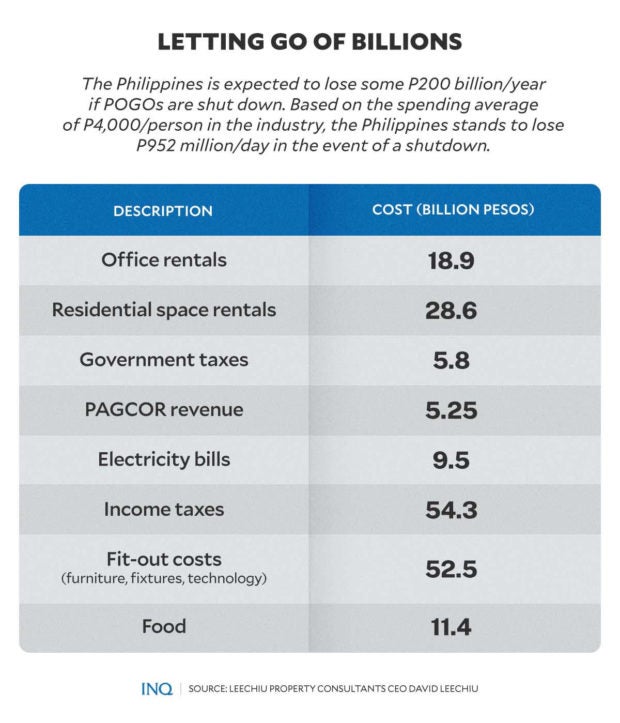 Based on data from the Department of Labor and Employment that were presented at a hearing by the Senate Committees on Ways & Means and Public Order & Dangerous Drugs, the industry currently employs 34,425 individuals—17,509 are foreign nationals while 16,736 are Filipinos.

The Bureau of Internal Revenue (BIR) said the reason for the drop was the confluence of these: (1) transfer and relocation of some Pogo companies (2) change in the taxing regime in the Philippines and reluctance of POGO companies who left to pay taxes and (3) the crackdown of the Chinese government on online gambling.

This law amended the National Internal Revenue Code and imposed more taxes aside from the franchise tax levied on their operations.

With the law, the Department of Finance (DOF), on the assumption that operations will return to pre-COVID levels, expected that the government will generate P32.1 billion last year, but the BIR said it only collected P3.91 billion in 2021 and that in the first eight months of 2022, there were only P4.4 billion taxes generated from Pogos. 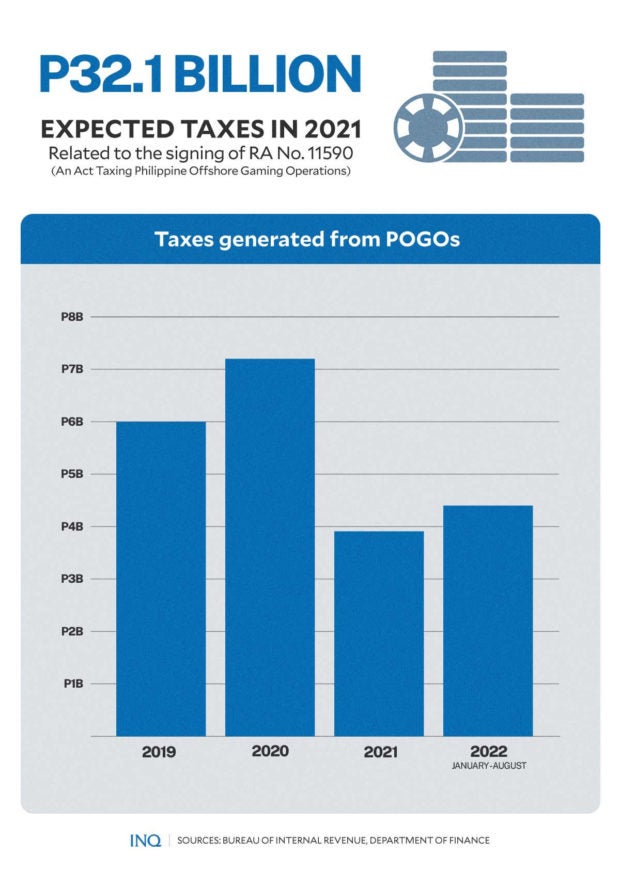 This was way lower than the P6 billion and P7.2 billion that the DOF said were generated from Pogos in 2019 and 2020, respectively. These, however, were still well below the P20 billion that the House of Representatives’ Committee on Ways & Means expected for 2019.

But why the need to do away with Pogos?

Last month, the Department of Justice (DOJ) said the Philippines will stop the operations of 175 Pogos after their licenses were revoked by Pagcor.

As a result, 48,782 foreign employees of these Pogo companies are given 59 days to leave the Philippines. Those who remain beyond 59 days will be deported.

It was only last Sept. 17 when the police rescued 133 workers of different nationalities following a call for assistance from the Chinese Embassy. 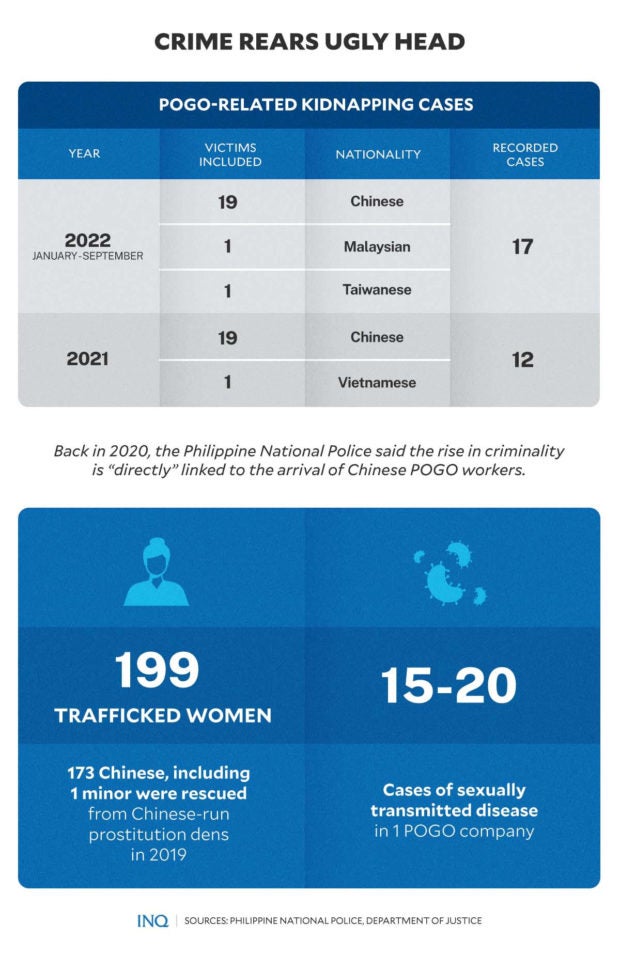 The National Bureau of Investigation (NBI) said the 133 workers, mostly Chinese nationals, were allegedly forced to work in an illegal Pogo.

Sen. Risa Hontiveros said on Tuesday (Oct. 4) that the social costs brought by Pogos should be enough reason to discontinue their operations in the Philippines, especially considering that China itself declared them illegal.

“Since then, until now, I will not give up in calling on the government to disallow Pogos,” she stressed.

This, as the Philippine National Police (PNP) said Pogo-related crimes spiked this year, adding that there were 17 Pogo-related kidnapping cases from January to September, an increase from 12 last year. The victims, it said, were 19 Chinese nationals, a Vietnamese, a Malaysian, and a Taiwanese.

Back in 2020, the PNP likewise said the rise in criminality is “directly” linked to the arrival of Chinese Pogo workers in the Philippines, stressing that in 2019, 199 trafficked women—173 of them Chinese nationals—were rescued from Chinese-run prostitution dens.

Likewise, a week before the Sept. 17 NBI operation, police rescued 43 Chinese nationals “who were similarly enslaved in human trafficking conditions” in a Pogo company in Angeles City, Pampanga. 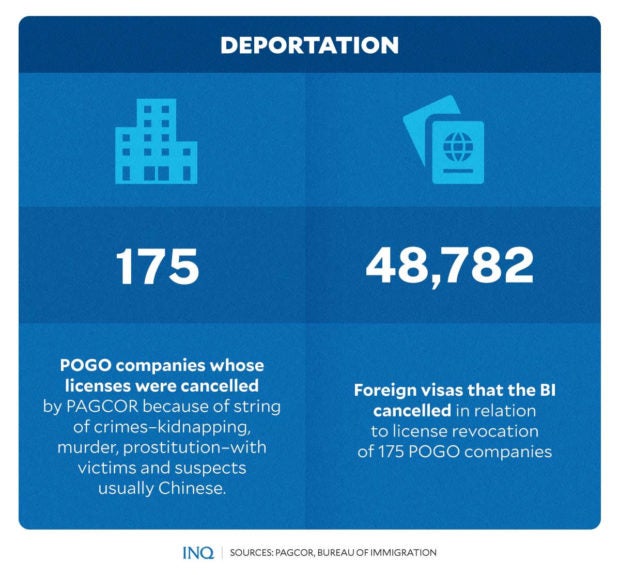 The DOJ likewise reported on Monday (Oct. 3) that aside from involvement in crimes, there is also a spread of sexually transmitted diseases among foreign Pogo employees, something that irritated Hontiveros, who stressed that Pogos “messed our country’s economy and security, and now they are an added burden to our health system.”

READ: Aside from crimes, Pogo workers also have cases of spreading STDs

Clavano said based on reports that the DOJ received, one Pogo company had 15 to 20 cases of sexually transmitted diseases.

“We will not wait for this to affect Filipinos,” he said, highlighting that the department is already determining the extent of the spread of the said diseases.

‘Crimes may scare away investors’

But Sen. JV Ejercito, who asked the police, NBI, and Bureau of Immigration to intensify its crackdown on Pogo-related crimes, said the security concerns should be immediately addressed as these may possibly scare away investors and businesses in the country.

“With the crackdown, what we are doing with undocumented, overstaying, expired visa or working permits of Pogo workers, it will soon give our country a better business climate since part of the requirement for foreign workers are clearances that they are not wanted or facing any criminal charges in their country, and that they will be required to obtain National Police Clearances and NBI clearances,” he said.

Last week, Pagcor defended legitimate Pogos, saying that illegal online gaming activities should not be associated with those that are legitimate.

“The agency emphasizes that any individual, group or entity which conducts online gambling without approval to operate from Pagcor should not be categorized as POGO.”

Pagcor chairman Alejandro Tengco assured the public that “any gaming entity that fails to pass the application process for an offshore gaming license and to fulfill the documentary and financial requirements, among others, cannot be labeled as legal offshore gaming operators of Pogo.”

Tengco, who is also chief executive officer (CEO) of Pagcor, stressed that the agency was closely working with the Department of the Interior and Local Government, DOJ, PNP, and NBI to weed out illegal gaming operations in the country, and put an end to the recent spate of kidnapping and trafficking.

‘No to blanket ban’

But despite the rising tide against Pogos, the Senate said last month that it would consider concerns from the business sector regarding the effects of a ban, with Sen. Sherwin Gatchalian, who heads the Senate Committee on Ways & Means, initiating a hearing on the economic costs of doing away with the industry.

Based on estimates from Leechiu Property Consultants CEO David Leechiu, the economy is expected to lose some P200 billion yearly—from office and residential rentals, income taxes, electricity bills, employees’ wages and regulatory revenues—if the remaining Pogos are shut down. 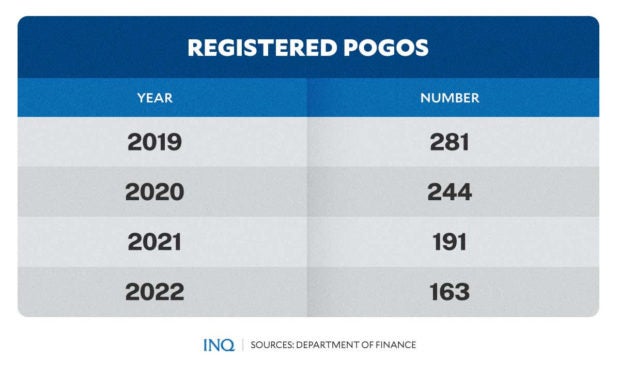 Leechiu said the complete exit of remaining companies, which occupy 1.05 million square meters of office space all over the Philippines, will result in P18.9 billion in lost yearly office rentals, while P28.6 billion worth of rentals for residential space is also expected to be lost.

The government will also lose an estimated P5.8 billion in government taxes, while Pagcor is expected to forgo P5.25 billion in revenues. The departure of Pogos will also result in the loss of P9.5 billion in payments for electricity bills to power distributors.

Likewise, P54.3 billion in income taxes will be lost because of the exit of foreign workers, while the local economy will suffer the loss of P52.5 billion in “fit-out” costs for furniture, fixtures and technology for these companies’ offices, Leechiu, a property analyst, said.

The Pogo workers, he said, also spend an estimated P11.4 billion yearly on food, all of which will be lost if the industry is shut down. He estimated that, based on the spending average of P4,000 per person in the industry, the economy will face losses of P952 million every day. 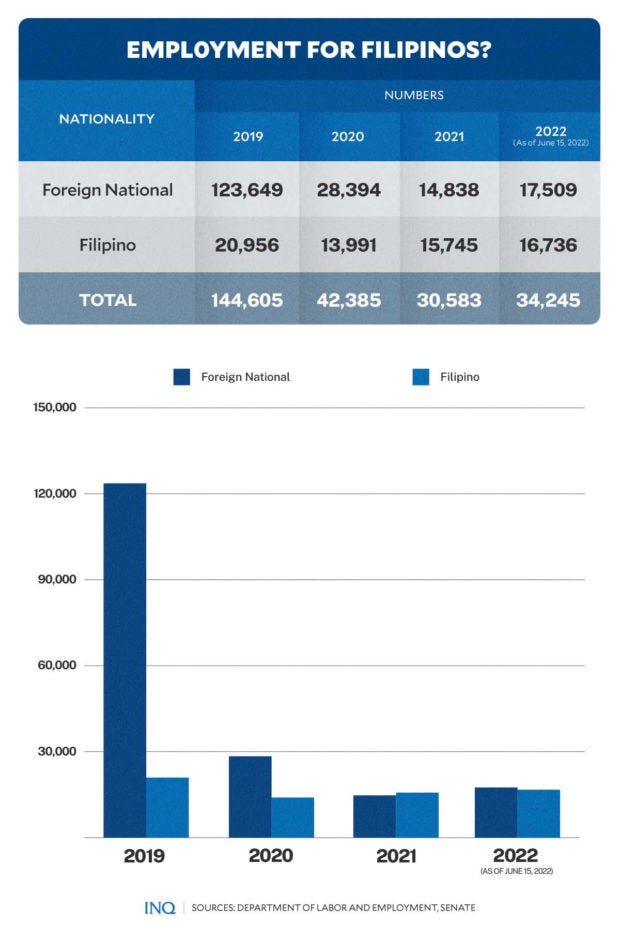 This, of course, is on top of the thousands of workers—foreign nationals and Filipinos—who stand to lose their source of income.

Salceda stressed that the ban “will hurt our reputation with investors not just in the gaming sector. We will be known as a country that burns down houses just to kill the rat inside.”

He said instead of a ban, Pogos can be kept within controlled and heavily regulated spaces. “We have a potential global advantage in that we recognize them [Pogos] as taxable entities, unlike other countries that consider them a gray area.”

Salceda added that “if the government bans Pogos, it will just drive them underground and that would be worse. Gambling has been digitizing.”

For Leechiu, “this is not the time to create a real estate crisis, on top of the other crises that we’re already facing.”

He stressed that while politicians are pointing to the reduced taxes that the industry has paid in recent years due to the slump in operations, they are ignoring potential losses in other sectors that depend on the industry as well as the thousands of Filipinos employed in online gaming.

Read Next
Kishida, Biden agree to boost deterrence over North Korea missile test
EDITORS' PICK
Viral phone HONOR X9a 5G launched at P16,990
Philippines to offer VAT refund to foreign tourists by 2024
Things you can do with vivo Y02s’ upgraded 3GB+64GB storage
Novak Djokovic crushes Tsitsipas to win 10th Australian Open
House energy committee chair Arroyo bats for cheap electricity
Labor groups slam planned importation of 450,000 MT sugar
MOST READ
Jaja Santiago acquiring Japanese citizenship, out for Philippine team–De Brito
Paolo Contis on real score with Yen Santos: What you see is what you get
Peter Rosalita gets standing ovation from America’s Got Talent judges, crowd: ‘No hiccups’
A crown and sash, a necklace and a kulambo
Don't miss out on the latest news and information.