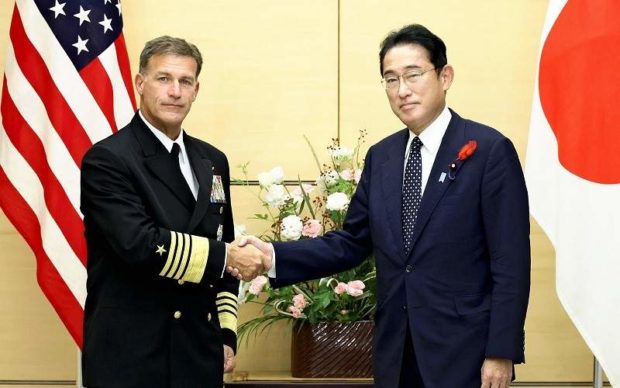 Reaffirming the bilateral alliance, Kishida and Biden spoke for about 25 minutes on the phone about the ballistic missile that flew over Japan, saying North Korea’s acts pose a grave challenge to the peace and stability of the international community.

The two allies also confirmed that together with South Korea they will closely work toward the complete denuclearization of North Korea.

After the talks, Kishida told reporters that he conveyed his determination to work on drastically strengthening Japan’s defense capabilities.

Kishida added that when he discussed the issue of North Korea’s past abductions of Japanese nationals with Biden, the U.S. president assured him that Washington will thoroughly cooperate with Tokyo to resolve the situation.

The same day, Kishida met the commander of the U.S. Indo-Pacific Command Adm. John Aquilino during his visit to Japan at the Prime Minister’s Office. They confirmed that Tokyo and Washington will work closely together through joint drills and other exercises.