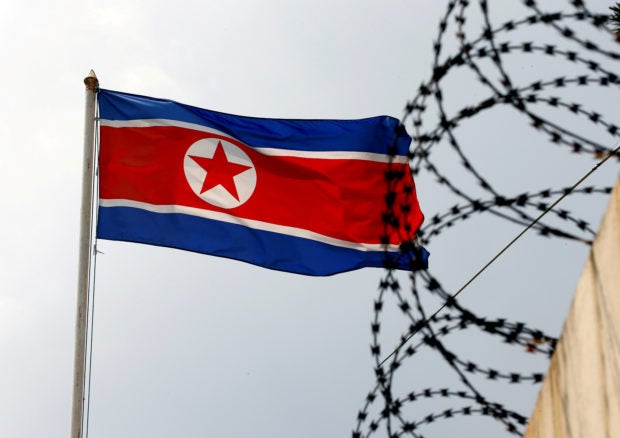 SEOUL/TOKYO — Nuclear-armed North Korea fired a ballistic missile over Japan for the first time in five years on Tuesday, prompting a warning for residents to take cover and a temporary suspension of train operations in northern Japan.

The Japanese government warned citizens to take cover as the missile appeared to have flown over and past its territory before falling into the Pacific Ocean. It said it did not use any defense measures to destroy the missile, which was the first to fly over or past Japan from North Korea since 2017.

South Korea’s Joint Chiefs of Staff (JCS) said it appeared to have been an intermediate-range ballistic missile (IRBM) launched from North Korea’s Jagang Province. North Korea has used that province to launch several recent tests, including multiple missiles that it claimed were “hypersonic.”

The test prompted East Japan Railway Co to suspend train operations in the northern regions, Japanese broadcaster NHK reported. Matsuno said there were no reports of damage to aircraft or ships from the missile.

The initial flight details announced by South Korea and Japan suggest the missile may have been the Hwasong-12 IRBM, which North Korea unveiled in 2017 as part of its threatened plan to strike Guam, said Kim Dong-yup, a former South Korea Navy officer who now teaches at Kyungnam University.

The Hwasong-12 was used in 2017 tests that overflew Japan, and Kim noted it was also test fired from Jagang Province in January.

North Korea’s flurry of missile testing is helping make more of its weapons operational, develop new capabilities, and send a message that its weapons development is sovereign right that should be accepted by the world, analysts said.

North Korea’s missile and nuclear weapons programs are banned by United Nations Security Council resolutions, which have imposed sanctions on the country.

Many of North Korea’s ballistic missile tests are conducted on a “lofted trajectory,” which sends them high into space but leads to an impact point not far from the launch site, avoiding over flights of its neighbors.

“Compared to the usual highly lofted trajectory, this allows them to expose a long-range reentry vehicle to thermal loads and atmospheric reentry stresses that are more representative of the conditions they’d endure in real-world use,” he said.

“Politically, it’s complicated: the missile largely flies outside of the atmosphere when it’s over Japan, but it’s obviously distressing to the Japanese public to receive warnings of a possible incoming North Korean missile.”

The latest launch was Pyongyang’s fifth in 10 days, amid military muscle-flexing by the United States and South Korea, which conducted trilateral anti-submarine exercises last week with Japanese naval forces.

South Korean President Yoon Suk-yeol called the test “reckless” and said it would bring a decisive response from his country’s military, its allies and the international community.

The North has completed preparations for a nuclear test, which it might look to undertake sometime between China’s Communist Party Congress this month and U.S. mid-term elections in November, South Korean lawmakers said last week.

“So I guess the extremely sensitive period of the run-up to Xi Jinping’s 20th Party Congress was not deemed sensitive enough in Pyongyang to prevent or at least delay this,” John Delury of Seoul’s Yonsei University, said of Tuesday’s missile launch in a post on Twitter.

The launch over Japan was “unfortunate” and “not a productive path forward,” Daniel Kritenbrink, the top U.S. diplomat for East Asia, said during an online event hosted by the Institute for Corean-American Studies.

“We are open to diplomacy with North Korea (but) it very much takes two to tango,” he said. “We are going to leave that door open, but we are going to respond resolutely to this growing threat.”