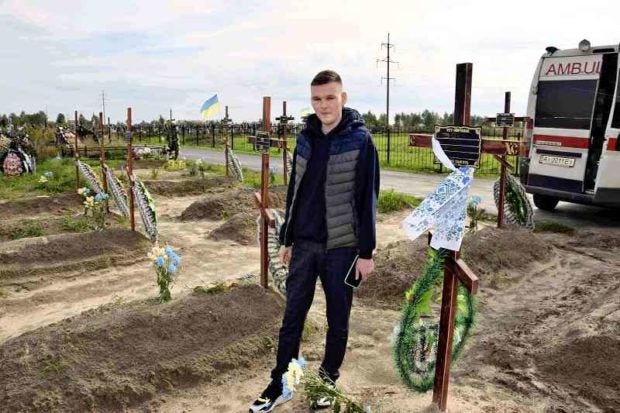 Vadym Yevdokymenko stands in front of a grave that he believes holds his father’s remains, in Bucha, Ukraine, on Sept. 30. The Japan News/Asia News Network

BUCHA, Ukraine — Six months have passed since about 450 bodies were found in a mass grave and other locations in Bucha, a suburb of Kyiv, the Ukrainian capital. Even now, some bodies remain unidentified, and distraught families continue to search for missing loved ones.

Myriad crosses cover a graveyard in western Bucha, which had been temporarily occupied by Russian troops. Some crosses bear just numbers and symbols. The slain bodies were buried in this cemetery, but about 50 have yet to be identified.

Standing in front of a cross marked “320,” 20-year-old Vadym Yevdokymenko said, “I want to know as soon as possible whether the body buried here is that of my father.”

Vadym lost contact with his then hospitalized 42-year-old father, Oleksii, in early March, when the fighting intensified. Vadym fled to the west with his mother and did not return to the city until May, following the Russian retreat. When he learned that his father may have been among five people burned alive in a garage, he was unable to speak.

Photos taken at the site showed human bones with a glossy sheen. A police officer explained that bones take on this look when burned with gasoline.

Oleksii worked as an engineer for Antonov Company, a Ukrainian aircraft manufacturer. Mechanically inclined, he would spend weekends in his garage, maintaining cars and assembling motorcycles.

“When our neighbors needed help with a repair, my father was always quick to help them,” Vadym recalled. “I have mixed feelings about the fact that my father’s days may have ended in a garage.”

Clothing and a credit card belonging to Oleksii were found in the garage where the bones were discovered, and a local resident confirmed that he had seen Oleksii in the area.

Vadym became convinced that the bones were his father’s and asked the police to conduct a DNA test, but four months passed with no results.

Taras Viazovchenko, 44, who is assisting with the identification work, said, “I’m determined to identify all the bodies.” However, he conceded that this was no easy task, as some remains have been deemed to difficult to perform DNA testing on.

Russian forces have tortured and killed civilians in various parts of Ukraine, and cases similar to Bucha will likely come to light.

Vadym currently attends a school in Kyiv where he is training to become a hairdresser. But he lives in constant anxiety.

“I can never forgive [Russia],” he said.

What we know about what happened in Ukraine’s Bucha