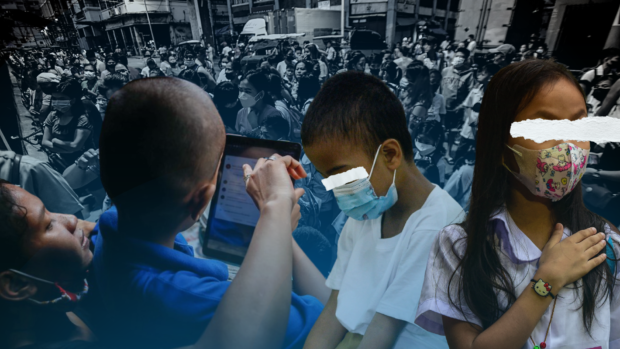 MANILA, Philippines—The group Save the Children Philippines (SCP) had stressed that even before the COVID-19 crisis hit, millions of Filipino children with disabilities “already have limited access to quality and inclusive education.”

This was the reason that in 2021, parents of children with disabilities asked then President Rodrigo Duterte to call for the immediate passage of a bill that seeks to provide inclusive education for learners with disabilities.

Jenny (not her real name), mother of a child with disability in Parañaque City, said while all children have the right to education, not all of them have enough resources and capacity to do so.

Last March 11, Duterte signed Republic Act (RA) No. 11650 or the Instituting a Policy of Inclusion and Services for Learners with Disabilities in Support of Inclusive Education Act.

This mandated that all schools—public and private—shall ensure equitable access to quality education for every learner with disability, stressing that the government has the responsibility to promote and protect the rights of learners with disabilities.

With the law, learners with disabilities, who have not had basic education services, will receive support through the Child Find System which will identify and facilitate inclusion in learning programs, SCP said. 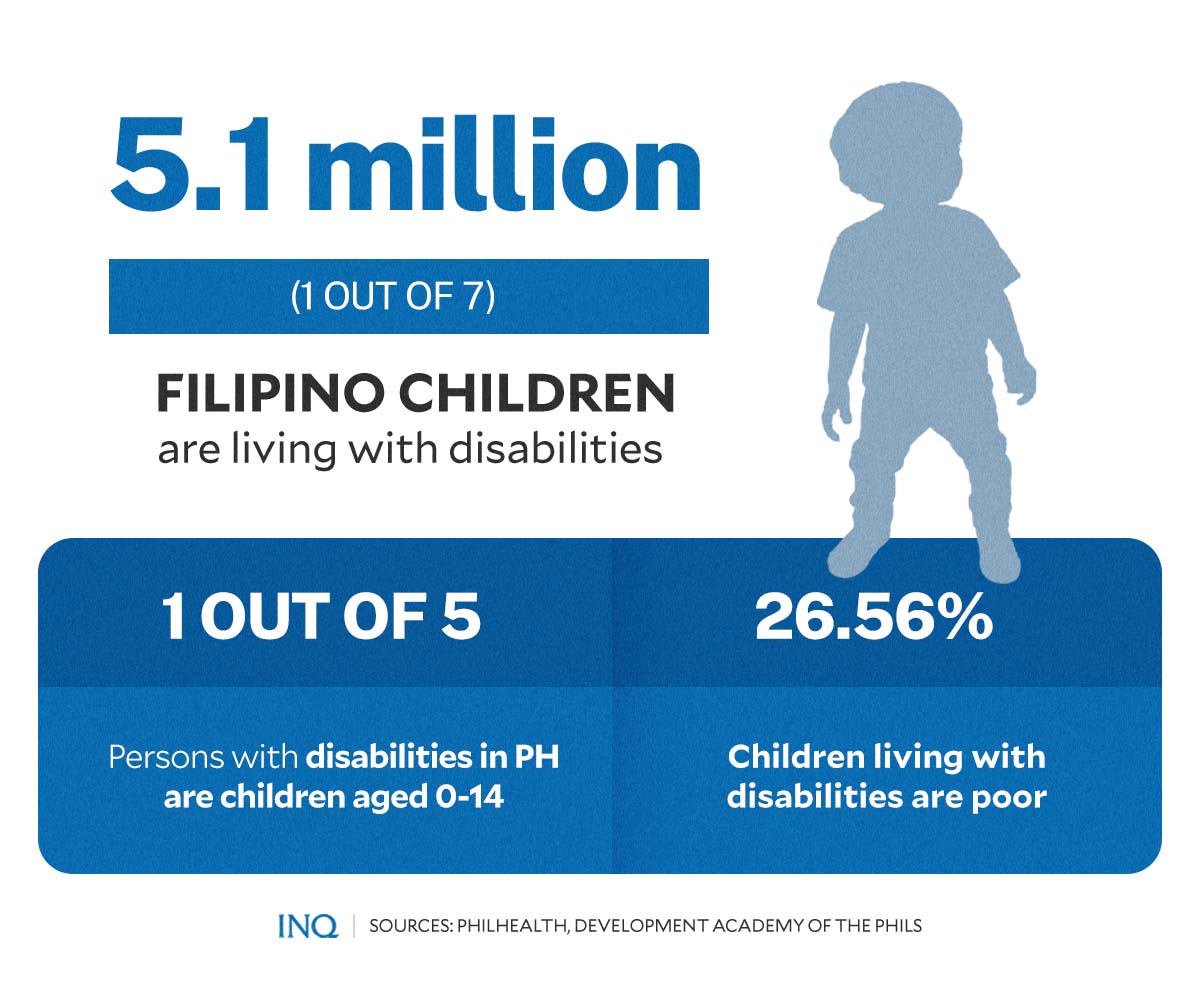 But since the special education (SPED) program was not considered in the 2023 National Expenditure Program (NEP), Jonathan Geronimo, secretary general of the Alliance of Concerned Teachers (ACT) Private Schools, said the law would be good-for-nothing.

“The law, which was signed last March, would be meaningless if the Department of Education (DepEd), which is expected to implement the law that aims to promote inclusive education, has no budget for it,” he told INQUIRER.net.

He said there was a need to fund the SPED program because “inclusive education would only be possible if there is enough budget for the provision of suitable and safe facilities, comprehensive programs, and required equipment.” 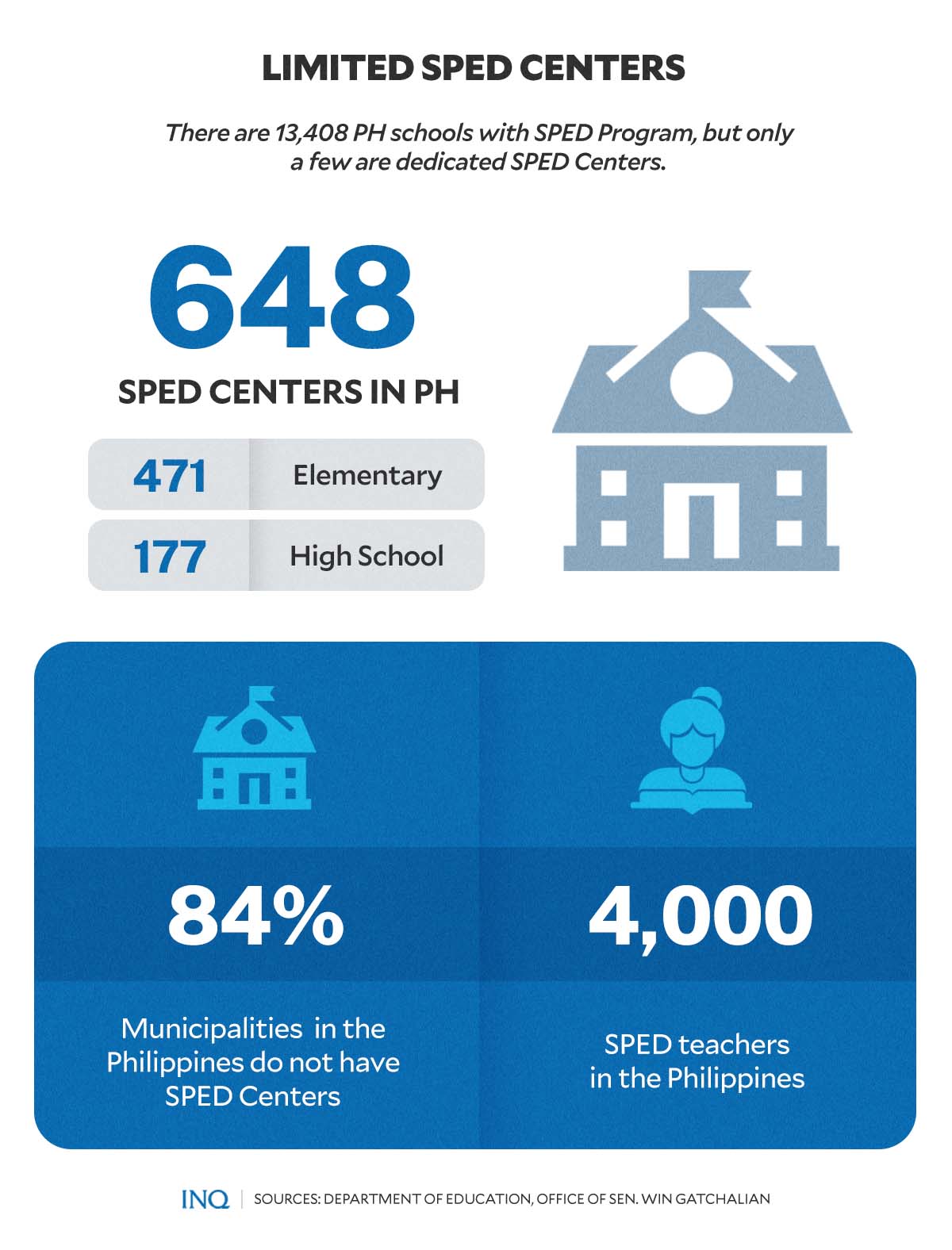 The Philippine Health Insurance Corp. (PhilHealth) had estimated that one out of seven, or 5.1 million, Filipino children are living with disabilities, an increase from 3.5 million in 2016.

Based on DepEd data, there were 360,879 learners with disabilities in SY 2019-2020, but Geronimo said enrollment fell in SY 2020-2021 “possibly because there was no clear program for them when distance learning was implemented.”

Sen. Sherwin Gatchalian, chairman of the Senate committee on basic education, said as of last March 15, there were 126,598 learners with disabilities enrolled in DepEd schools for SY 2021-2022.

He said learners with disabilities are some of the hardest hit when the COVID-19 crisis led to school closures: “The crisis, in the last two years, brought a vast challenge to them.”

This was the reason that after the line item for SPED was not considered by the Department of Budget and Management (DBM) in the 2023 NEP, he promised that learners with disabilities will get the resources they need.

The DepEd said it proposed a P532-million budget for the SPED program next year, but “despite our earnest efforts to advocate for our learners with special needs, it was not considered in the NEP.”

The DepEd said “this is a recurring circumstance every year,” however, it is “not at a loss because we always work with members of Congress to find other ways to fund DepEd programs.” 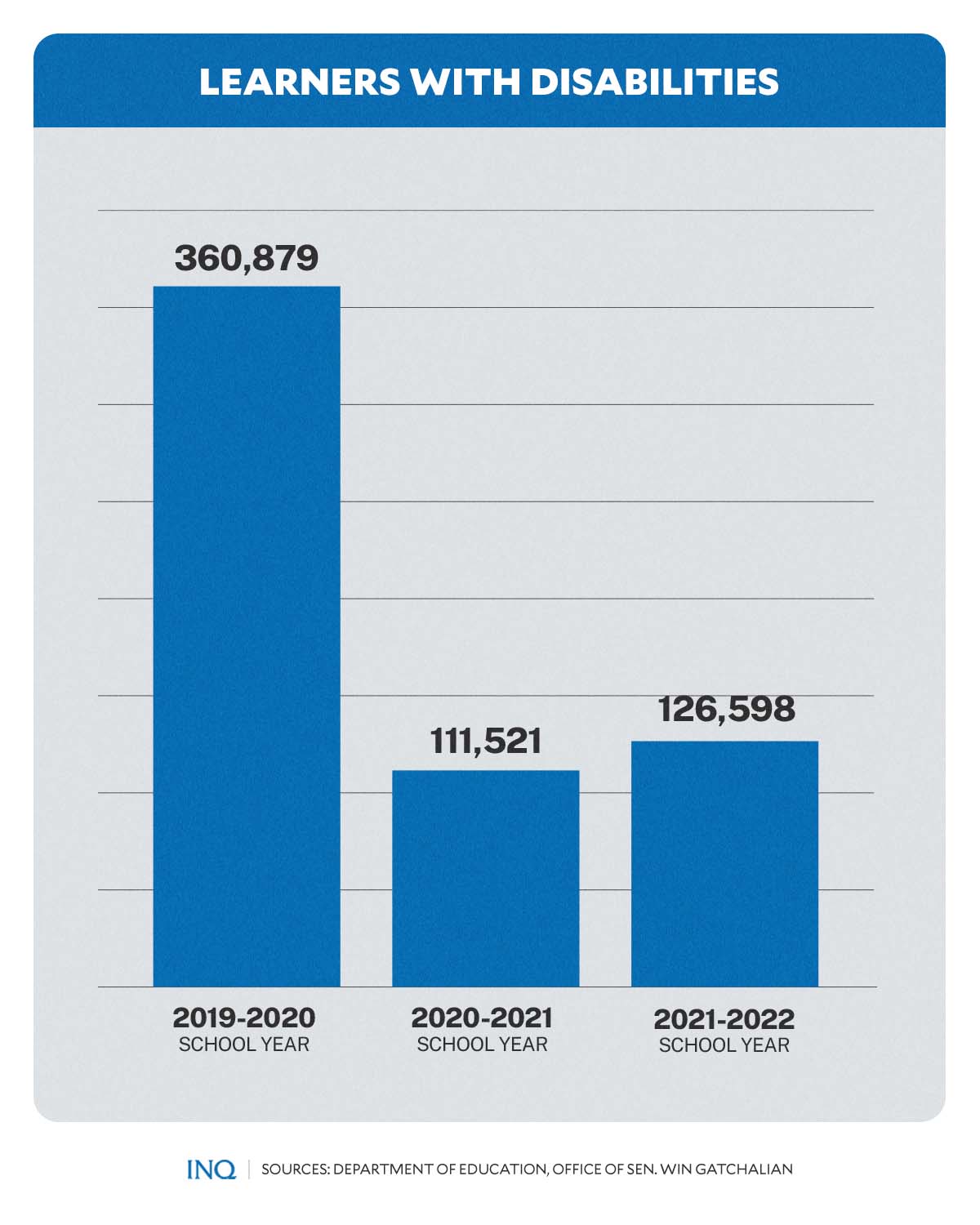 The DBM stressed that as of June 30, the SPED Program, as stated in the 2022 General Appropriations Act, has an obligation rate of 1.13 percent or only P6.35 million out of the P560 million allocation.

Dustin Pilapil, a SPED teacher at the Pateros Elementary School, told INQUIRER.net that this was why having SPED programs in schools is important: “Parents who do not have the resources rely on public schools for the education of their children,” he said.

Clarissa Gadiano, mother of a 4-year-old child with special needs, said it is really important to establish SPED programs in schools for these reasons: accessibility, raising awareness and acceptance.

“If there are strong and effective SPED programs in school, then special children will have better options and opportunities to learn. Because special children are not incapable of learning, they just have different abilities therefore they require different approaches or methods in teaching,” she told INQUIRER.net.

She said SPED programs in schools give way for awareness and acceptance to thrive: “At an early age, regular or neurotypical children will be aware that there are children who are different from them and they will be taught to accept and respect the community.”

Gadiano likewise stressed that sending a special child to school can be so expensive and on top of that, there are therapies, intervention and even access to diagnostics that are costly.

“There are a lot of children who are undiagnosed because their parents can’t afford to send them to a developmental pediatrician, and even after the diagnosis, it is financially exhausting to maintain the necessary intervention for the child.”

But despite the obvious need to reach out to learners with disabilities, out of the 13,408 schools in the Philippines that have SPED programs, only 648 are SPED centers—471 in elementary schools and 177 in high schools.

The DepEd said the “ideal student—teacher ratio” for SPED is 15:1, however, Gatchalian stressed that there are only 4,000 SPED teachers. This indicates that with 126,598 learners with disabilities, the present student-teacher ratio is 31:1.

Likewise, Chona Calnison, who was a SPED teacher for 15 years, previously told INQUIRER.net that since her employment as a teacher in 2003, classrooms for students with special needs were not given enough attention.

READ: Speaking to those who can’t hear: Why sign language matters in campaigns 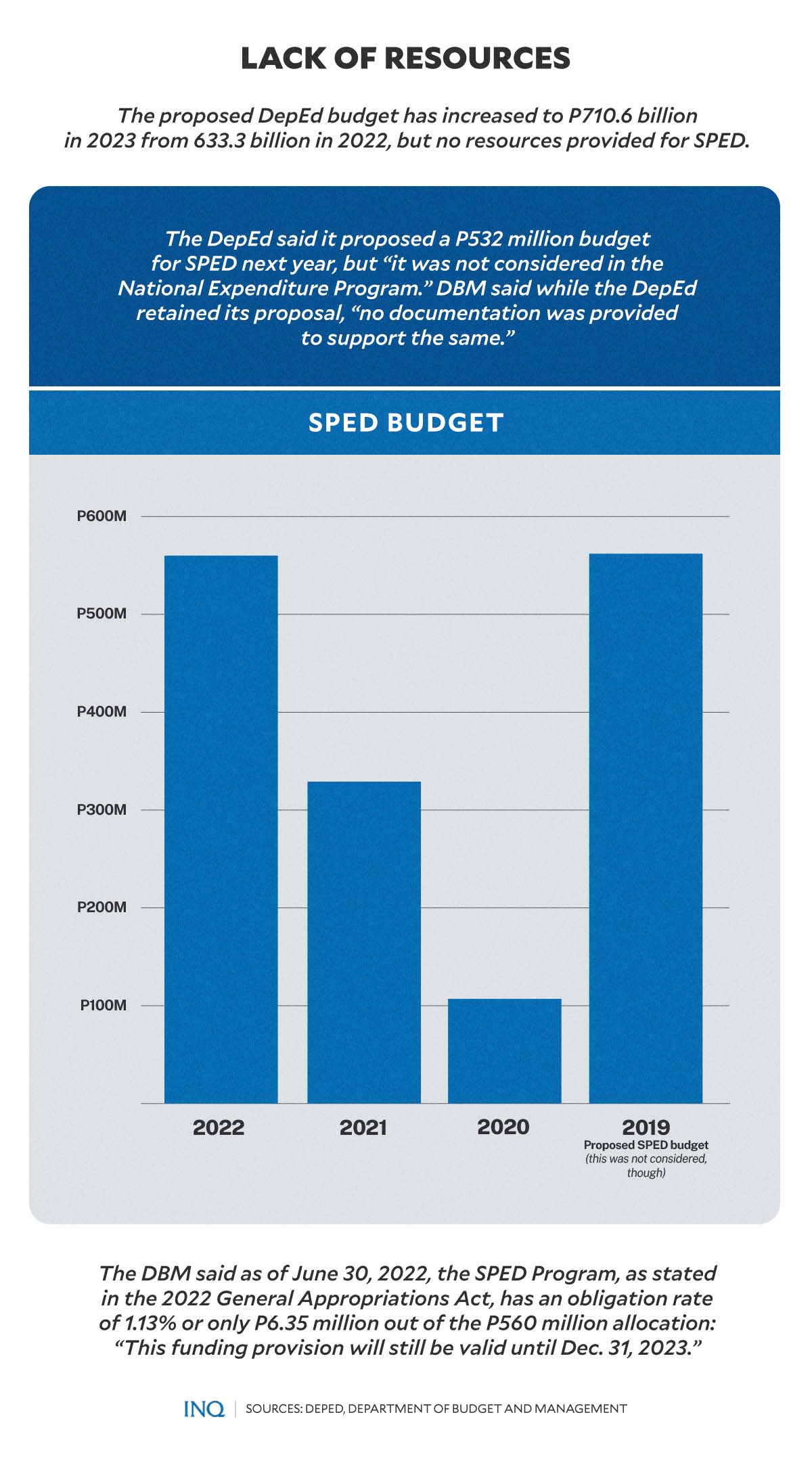 Gatchalian had said the existence of SPED centers or Inclusive Learning Resource Centers (ILRC), as mandated by RA No. 11650, will make “quality education” accessible to children and youth with disabilities or special needs.

The law, Gatchalian said, mandates that at least one ILRC shall be initially maintained and established in every city and municipality. The DepEd, in coordination with LGUs, shall maintain and establish these ILRCs.

It was stressed by Pilapil that there are a lot of things that SPED programs can do to help learners with disabilities and their parents, however, “we need resources to realize these comprehensive programs for them.”

Not yet the end

Last Monday (Oct. 3), Camarines Sur Rep. Gabriel Bordado Jr. reiterated his request that funds be allocated for SPED, as there were no funds provided in the draft of the General Appropriations Act.

Gatchalian, in a hearing conducted by the Senate Committee on Finance, likewise reiterated that there should be separate line items for the budgets of SPED and Alternative Learning System.

Last Thursday (Sept. 29), the DepEd said it will realign funds to restore the resources for SPED and that it is looking at including infrastructure programs in districts with a high number of SPED learners.

“We would like to update you that we will internally realign some of our funds so that the SPED program will be funded in 2023. So we will restore the budget of SPED as per instruction of our VP Secretary, all of it in the same level of the 2022 budget,” it said.

Senate Minority Leader Koko Pimentel said the Senate should realign the P150 million in confidential funds allotted to the DepEd for its 2023 budget, saying that they can augment the funding for the (SPED program) that was left out in the NEP.

“We can put the P150-million confidential expenses there so that (Congress) will not be accused of putting money on the wrong priorities,” he said.

Vice President and Education Secretary Sara Duterte, when pressed if her office was willing to forgo confidential funds, said through Davao de Oro Rep. Maria Carmen Zamora that she “defers to the decision of the majority of this honorable Congress.”