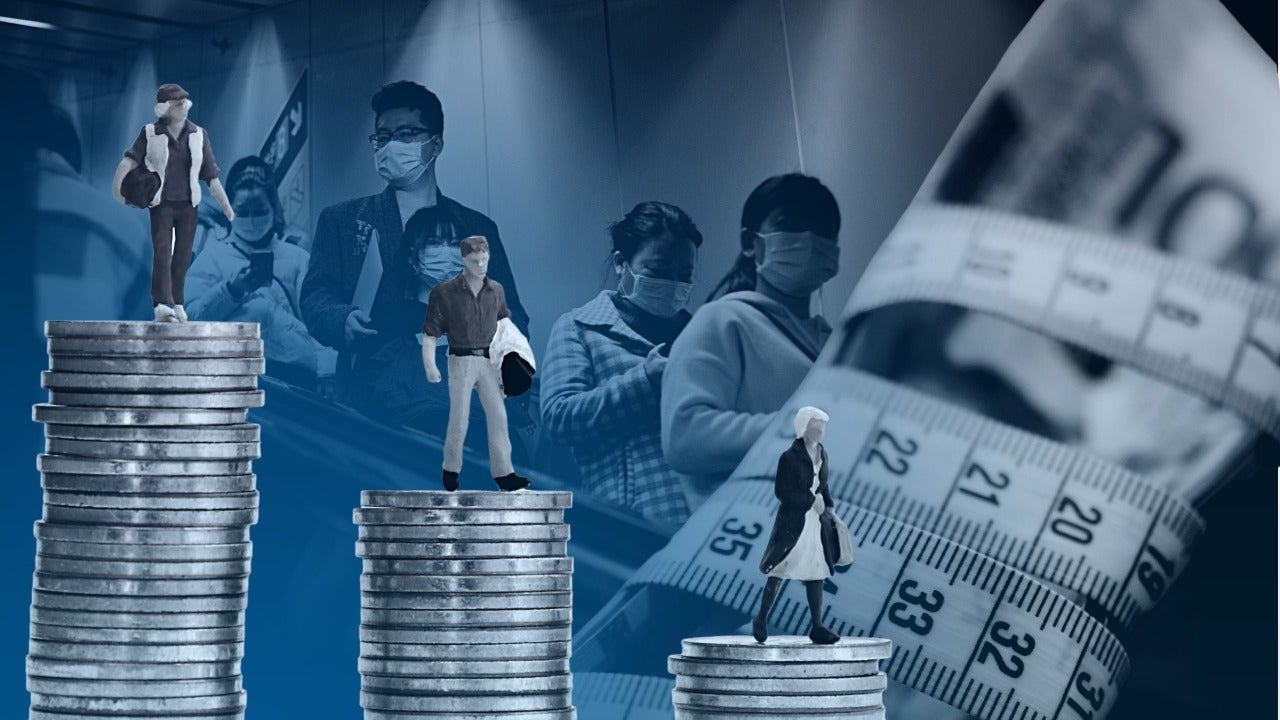 MANILA, Philippines—As the average annual family income fell by two percent in 2021, Ibon Foundation had this to say: “[Filipino] families were clearly caught in a pinch between falling incomes and rising prices.”

Sonny Africa, the think tank’s executive director, told INQUIRER.net that the protracted lockdowns in 2020 to 2021 and the lack of compensatory ayuda last year “clearly made family incomes collapse.” 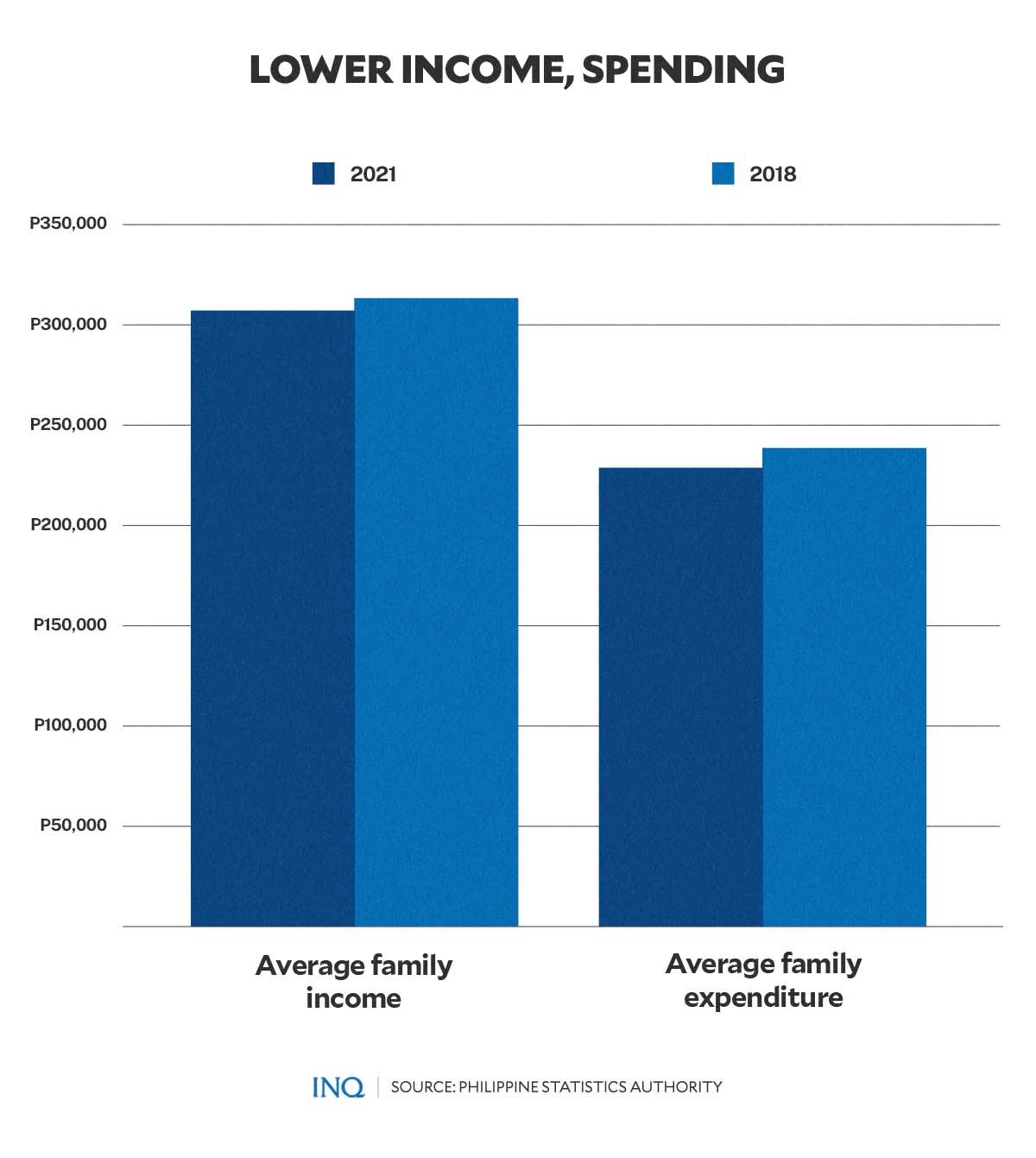 As a result, Africa, who is an economist, said “family expenditures fell because even those who drew on their savings still did not have enough to maintain their previous levels of consumption.”

This, while the number of households without savings increased from 15.7 million in 2019’s last quarter to 18.4 million by 2021’s last quarter, the think tank said based on computations on household savings data from the Bangko Sentral ng Pilipinas.

The decline in income, Africa said, was most felt in Metro Manila, but stressed that “unlike the national results, which showed a marginal increase in income in the lowest five deciles, income losses in NCR were felt in all but the lowest decile.”

Based on data from the PSA, Metro Manila is still the region with the highest average annual family income (P417,850).

Africa said expenditure trends are, however, a “better indicator” of the level of family welfare in measuring what is actually spent: “The collapse in expenditure was even larger—by 12 percent at the national level and 19.9 percent in Metro Manila.”

RELATED STORY: High inflation: Your P1 is now worth only 87 centavos

Based on data from the PSA, the Bangsamoro Autonomous Region in Muslim Mindanao (BARMM) registered the lowest average annual family income at P184,940 last year.

It said Makati City, on the list of provinces and highly urbanized cities (HUCs), registered the highest average annual family income of P579,570, while the lowest was noted in Sulu at P159,300. 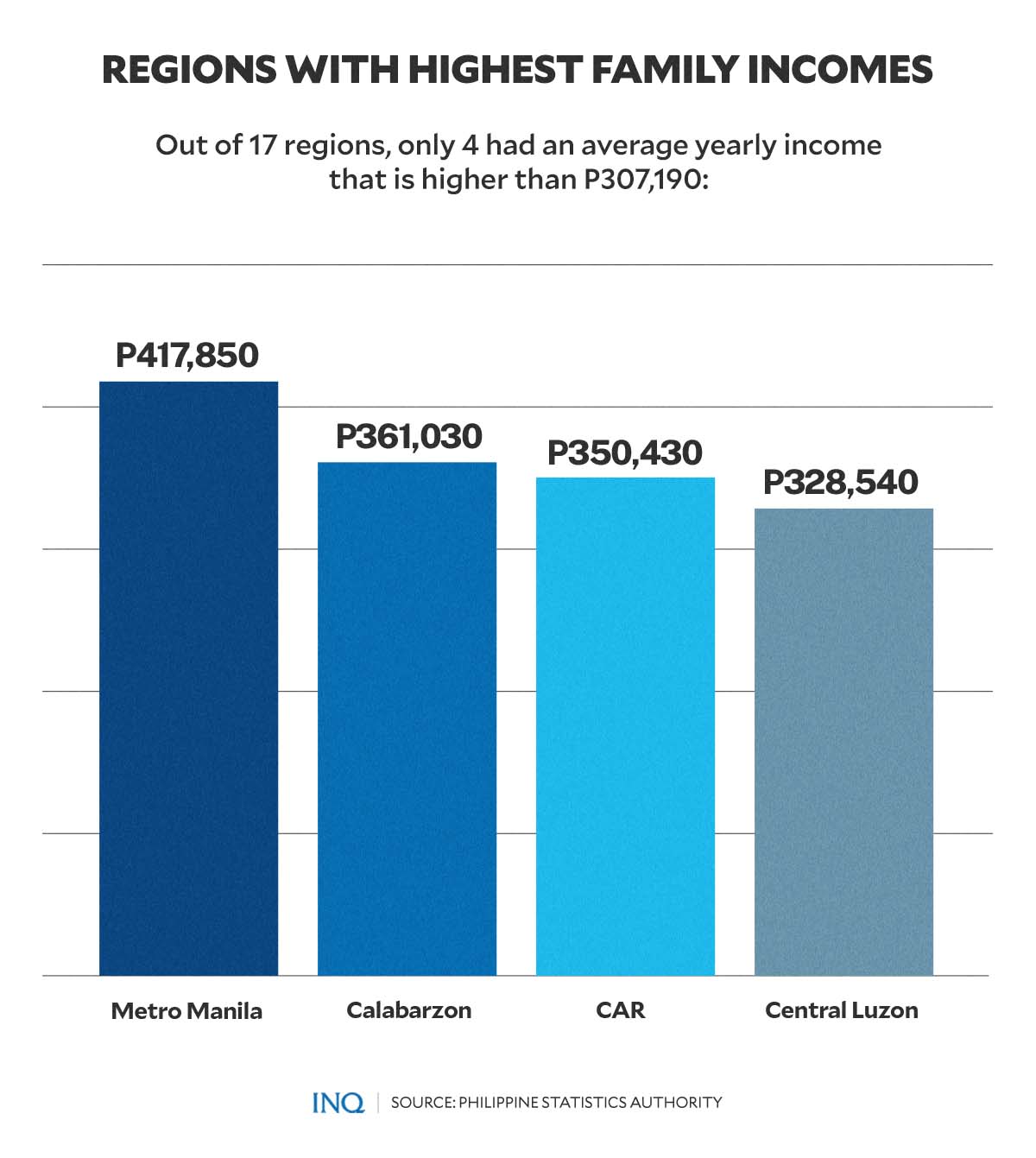 The PSA said the average annual family income among families in the first income decile to the fifth income decile in 2021 posted positive growths from their corresponding levels in 2018.

Then it was stressed by the PSA that the decline in the average annual family income of families in the sixth until the tenth income deciles from 2018 to 2021 ranged from 0.3 percent to 6.2 percent. 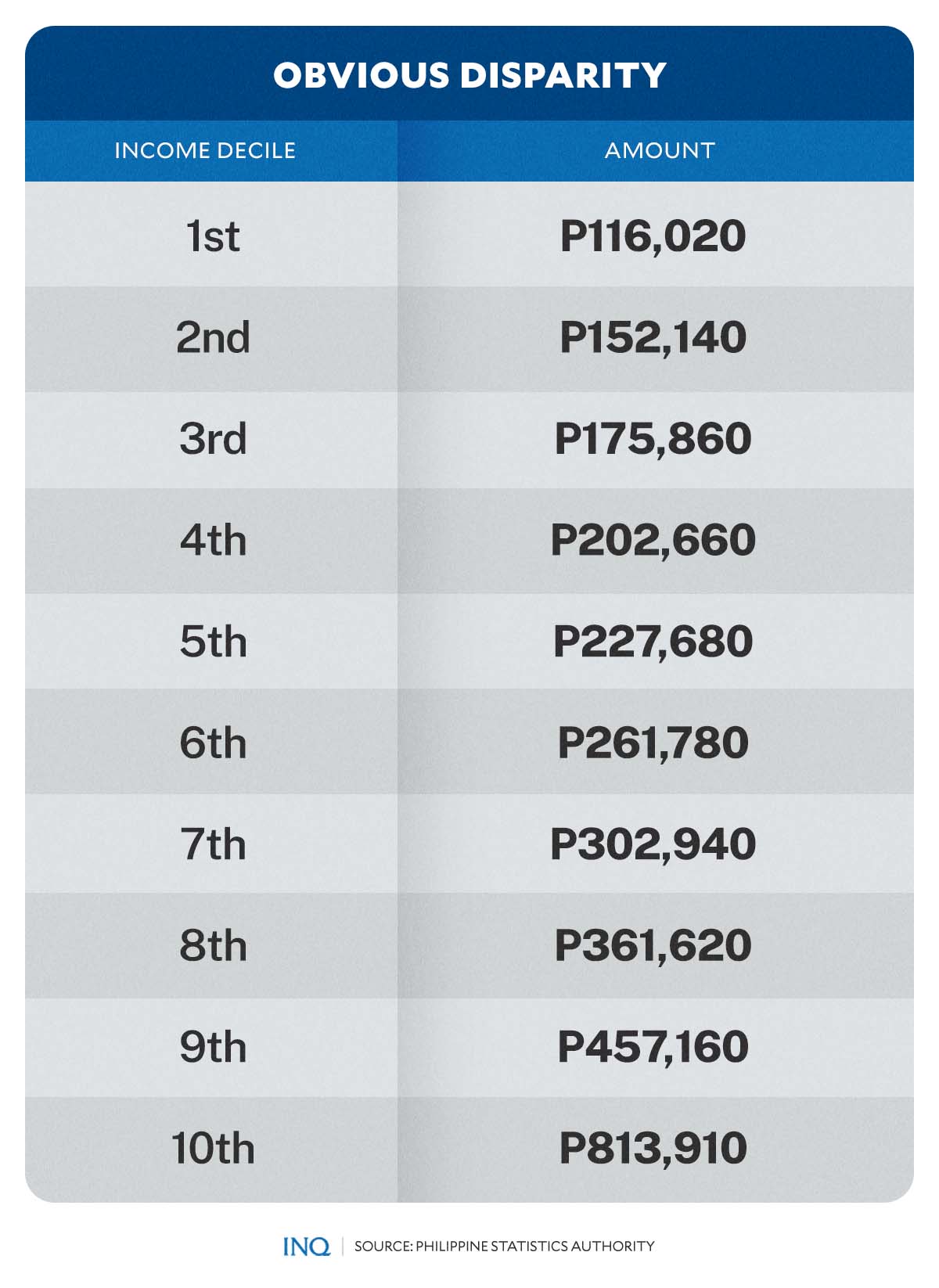 Ibon Foundation, however, said while the changes in income varied by decile, there was a uniform decline in expenditure across all income deciles. Family spending fell 4.1 percent at the national level and by 12.8 percent in Metro Manila.

Likewise, he said while there was a very marginal improvement in the Gini coefficient between 2018 and 2021, “this finding should not be overstated though.”

“The FIES does not actually capture families at the very poorest and, especially, at the very richest end of the family income scale. This means that the disparity in incomes between the richest and poorest families is actually even much worse than the official decile-based results report,” he said. 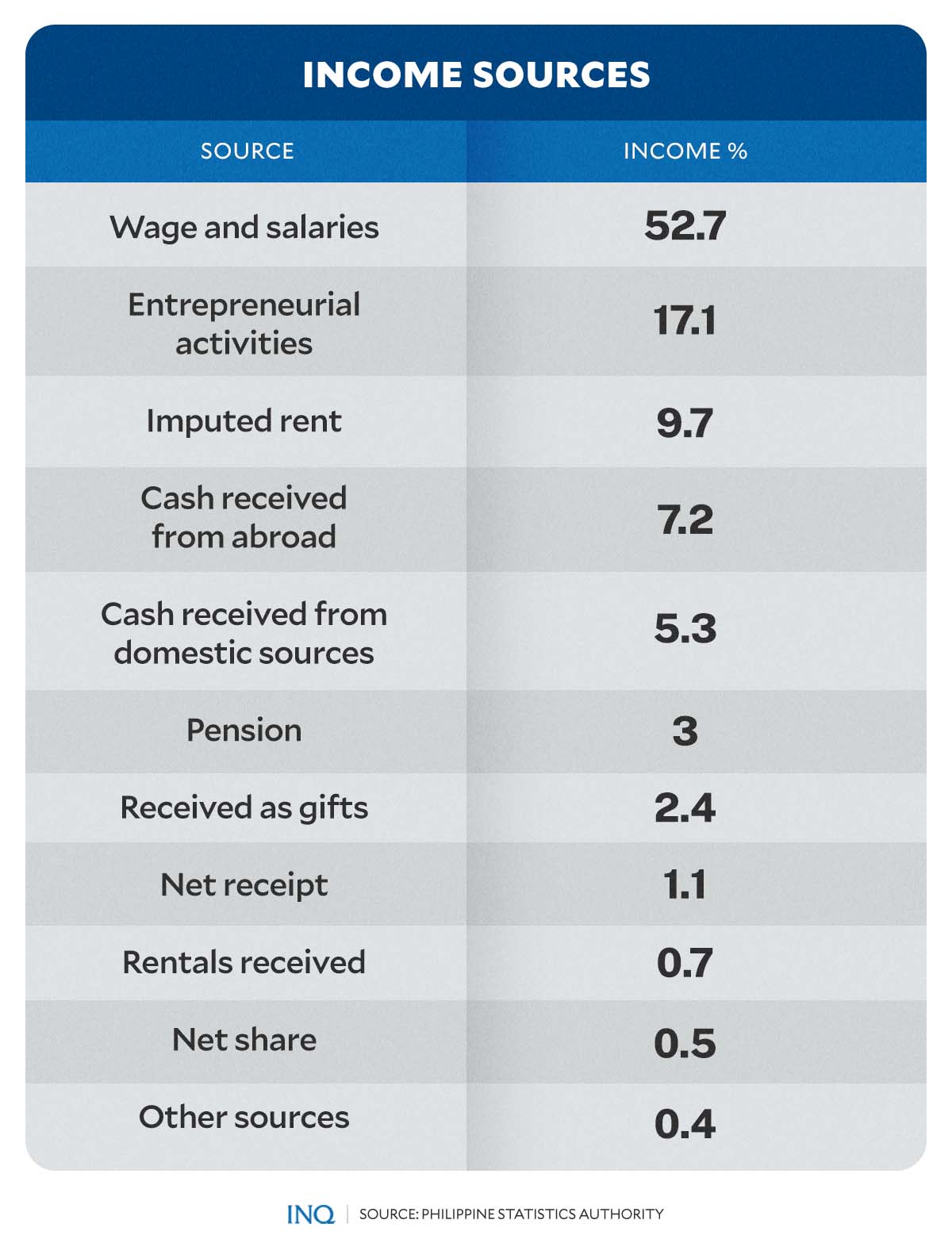 Africa stressed that the top 500 income earners, for instance, actually have an average monthly income of around P6.7 million. “The FIES’ income decile measure also doesn’t capture how the richest 2 percent of Filipinos have a combined wealth of some P20 to P25 trillion which is equivalent to what the poorest 80 percent have combined.”

The “disparity in the FIES,” he said, “should point to how the government needs to take much more aggressive measures to distribute the benefits of economic activity more equally, and especially to make sure that the poorest and most vulnerable Filipinos have access to all the essentials to live a decent life.”

No end in sight

The decline in family income was highly concerning because of the previous administration’s over-reliance on lockdowns to contain the spread of COVID-19 instead of a determined effort and increased spending on public health measures, he said.

For Africa, an early travel ban and expedient mass testing, contact tracing and quarantines should have been used instead of harsh and protracted lockdowns which drove the economy to the ground.

To recall, the Philippines had the biggest economic contraction in Asia in 2020 while employment collapsed from 42.5 million in January 2020 to 33.8 million in April 2020 at the height of the lockdowns.

Employment seemed to have recovered with a 3.7 million increase since January 2020 to 46.3 million by December 2021, as indicated in the result of the PSA’s Labor Force Survey.

“However, most of this supposedly additional employment was of very poor quality work and people struggling to make a living in whatever way they could,” Africa stressed.

The situation has only marginally improved in 2022, he stressed, saying that as of July 2022, the think tank estimates that some 34.6 million or 72.9 percent of total employment consist of self-employed, informal work, and workers in informal establishments.

“The prospects for household incomes to improve this year are poor with quarterly year-on-year economic growth already slowing since the second quarter and likely to slow even more in the remainder of the year,” he said.

He said this as economic growth already even contracted looking at seasonally adjusted quarter-to-quarter growth and that household consumption also already contracted.

“Absent immediate and substantial ayuda, including in the proposed 2023 budget, millions of Filipino families are facing continued and perhaps even worsening distress in the coming months. The situation clearly demands meaningful government action.”

“The rebound from reopening is fading and the situation of the majority remains worse than before the pandemic,” he said.

This, as the BSP recently reported that over seven out of 10 families (72.5 percent) did not have any savings as of the third quarter of 2022.

Africa said this is backed by the second quarter Social Weather Stations survey which had eight out of ten families reporting themselves as poor (48 percent) or borderline poor (31 percent): “These are magnitudes of 19 to 20 million families out of the country’s some 25 million families.”