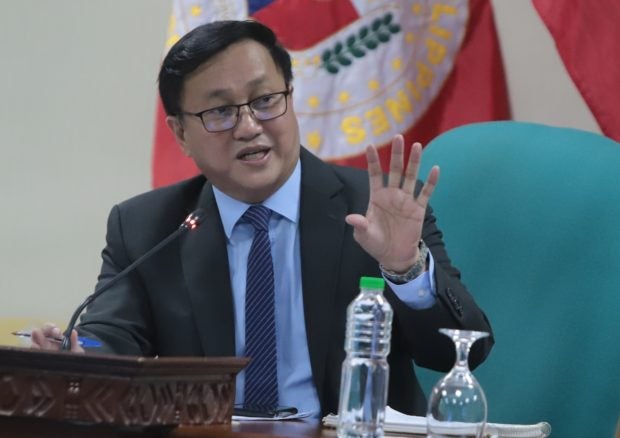 Sen. Francis “Tol” N. Tolentino presides over the continuation of the Blue Ribbon Committee hearing Thursday, September 29, 2022 to extract more evidence in order to establish concrete facts relative to the alleged irregularities in the procurement of laptops by the Department of Education (DepEd) for teachers’ distance learning program. Courtesy of Bibo Nueva España/Senate PRIB

MANILA, Philippines — Several public school teachers returned the laptops that the Department of Education (DepEd) provided for them due to specification issues.

(In fact, many teachers returned it. Then, they returned it after a while because it would not work. Finally, some just saw the specs and decided not to accept it.)

Basas also narrated an incident wherein a teacher from Aurora province returned the laptop, knowing that it cost nearly P60,000, justifying that she could not pay for it in case it got damaged under her possession.

Of the 30,000-strong teachers’ group, the TDC received less than 30 complaints on laptops, Basas noted, adding that some want to remain anonymous.

It was also learned during the hearing that non-teaching personnel received laptops from DepEd.

Of the almost 40,000 laptops that the DepEd procured and distributed, 12 percent are for non-teaching personnel, DepEd Director Abram Abanil bared.

There are almost one million teaching and non-teaching personnel under DepEd, said Basas.

The blue ribbon committee’s investigation of the DepEd’s P2.4-billion laptop purchase through the Department of Budget and Management-Procurement Service stemmed from the Commission on Audit report, stating that the units were expensive yet outdated. With reports from Irish Lorraine Perez, INQUIRER.net trainee