This was how Finance Secretary Benjamin Diokno described pandemic-related ayuda, stressing that given the economic rebound, there is already a lack of need to give out any more cash aid to the poor.

He said that since the economy has already recovered and is now back to where it was before the pandemic, “the giving of ‘ayuda’ in relation to the [COVID-19] crisis, I think, should already be discontinued”.

RELATED STORY: ‘Ayuda’ not a waste of money

“The giving out of ‘ayuda’ in relation to the pandemic is already a waste of public funds,” Diokno, who previously served as governor of the Bangko Sentral ng Pilipinas (BSP), said as he stressed that the country also has a “limited fiscal space”, or limited funds.

While he clarified that the rest of the other social protection programs, like cash aid for the elderly, should continue, the think tank Ibon Foundation said that slashing ayuda resources was “insensitive”.

This, as “millions [of Filipinos] still suffer the aftershocks of the Duterte government’s harsh pandemic lockdowns” and that the economic managers’ claim of full recovery is “empty”. 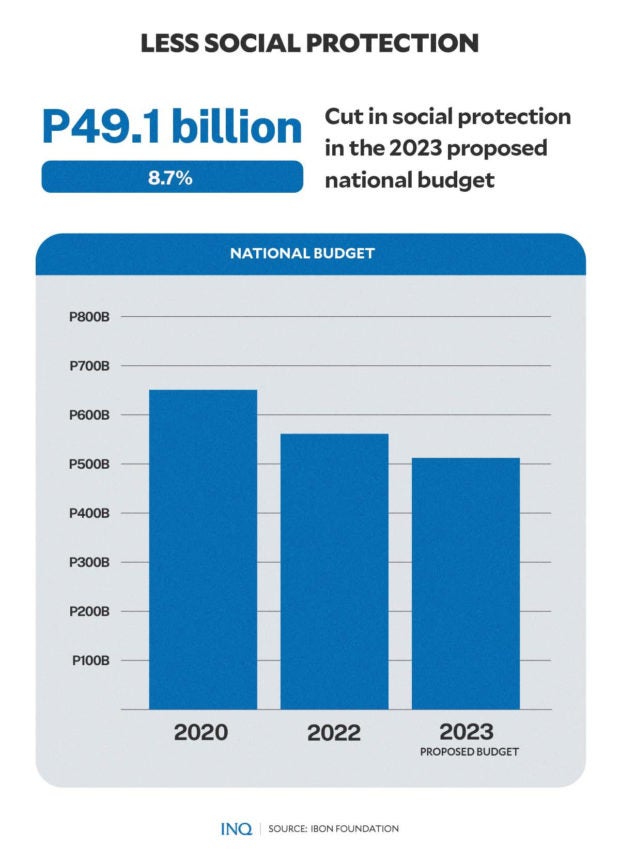 It stressed that based on the Department of Budget and Management’s 2023 Budget of Expenditures and Sources of Financing, the social protection budgets fell from P561.3 billion in 2022 to P512.3 billion in 2023.

The 2022 and 2023 social protection budgets are both far smaller than the P650.8 billion in 2020, which was the height of the lockdowns that were implemented by the government to stop the spread of COVID-19.

Ibon Foundation said that the biggest cuts are in allocation of social protection resources for families and children, joblessness, and housing, which were cut by P20.3 billion, P10.8 billion, and P2.6 billion. 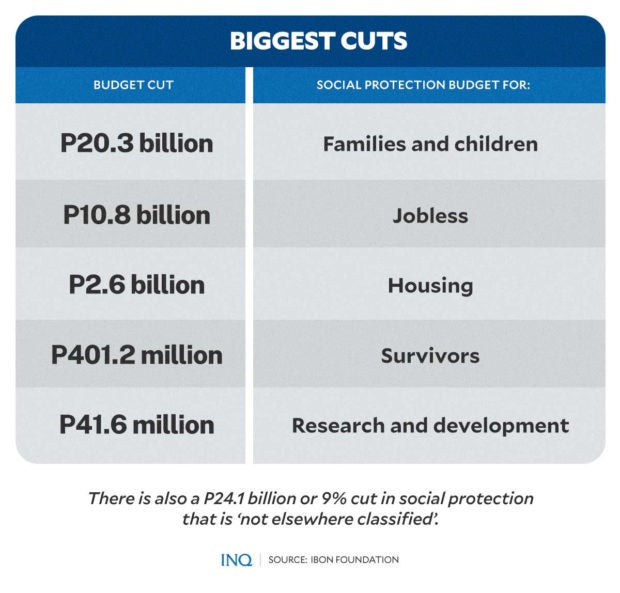 There were also slashes in the social protection budgets for survivors (P401.2 million) and research and development (P41.6 million). There is also a P24.1 billion, or 9 percent, cut in social protection that is “not elsewhere classified.”

It was stressed by the think tank that these huge slashes were “not off-set” by small increases in the rest of social protection items such as the conditional cash transfer program of the government, which was increased by P7.9 billion. 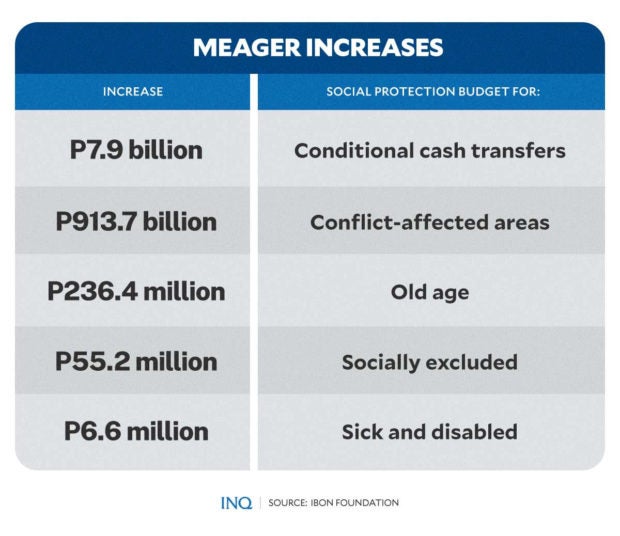 Ibon Foundation said that the agencies seeing budget cuts are the National Commission of Senior Citizens (52.3 percent), National Anti-Poverty Commission (17.2 percent), and the Presidential Commission for the Urban Poor (3.8 percent).

It said slashing social protection budgets despite the still existing health and economic crises reflects the government’s “insensitivity to millions of Filipinos in distress and its deliberate intent to ignore the country’s glaring problems”.

But Diokno said the ayuda related to the pandemic, such as in Bayanihan 1 and Bayanihan 2, the laws which allowed the government to give away billions worth of cash assistance to the poor, should already cease as “we learn to live with the virus.”

“These ayuda were justified when there were lockdowns and restricted mobility of citizens,” he said. “But there are no more lockdowns […] Citizens are now free to move around. Face-to-face schooling is back.”

Last July 25, President Ferdinand Marcos Jr. said in his State of the Nation Address that “we will not do any more lockdowns”. Schools, meanwhile, opened last Aug. 22 as most provinces remained on Alert Level 1 for COVID.

Diokno also stressed that “public finances are finite—they have to be allocated judiciously for programs and projects that would result in the greatest benefit for the greatest number of citizens and the overall welfare.” 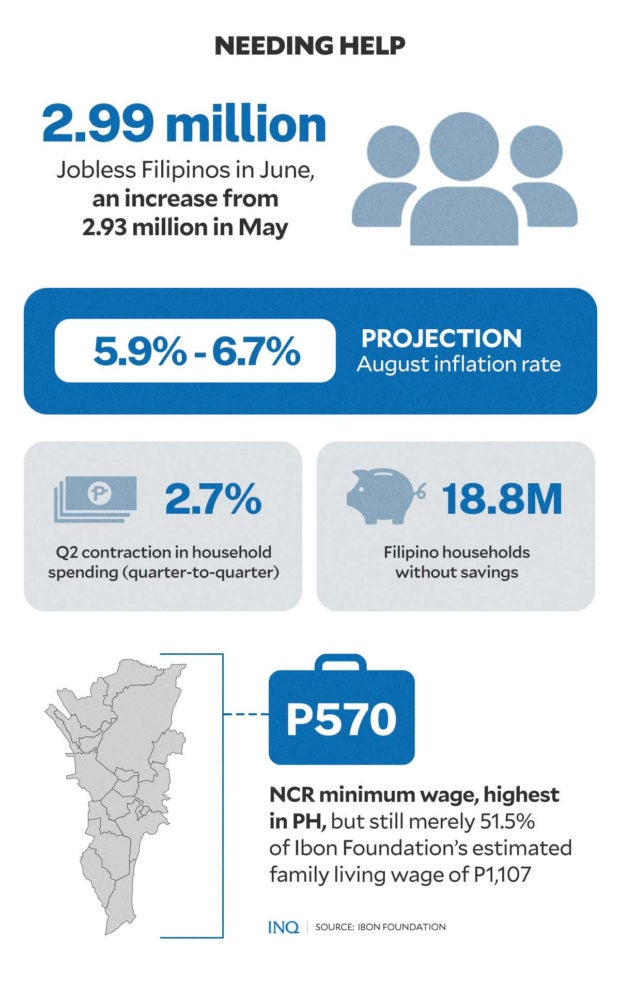 He said that the government is already thinking of limiting ayuda recipients to those who have national ID: “Only those with national ID should be entitled [to cash assistance].”

“The Philippine Statistics Authority (PSA) promised that they will produce at least 50 million national IDs by year end, both printed and in mobile form. The most efficient way to do this is by requiring every citizen to have a national ID,” he said.

It said the government’s logic to stop ayuda related to the COVID-19 crisis is not acceptable, saying that the lifting of most COVID-19 restrictions does not equate to working Filipinos making ends meet.

Fernando Hicap, chair of Pamalakaya, stressed that with the relentless fuel price hikes and its effects on basic needs and services, discontinuing the distribution of ayudas is as good as “state abandonment and neglect”.

Likewise, Ibon Foundation said the growth in gross domestic product in the second quarter slowed to 7.4 percent year-on-year and even contracted by 0.1 percent quarter-to quarter, “which indicates the rebound fading and recovery weakening”.

It said household spending contracted by 2.7 percent, quarter-to quarter, repressed by the Philippines’ jobs crisis, falling incomes, and rising poverty. The BSP also said 18.8 million households do not have any savings.

Last month, the PSA said 2.99 million Filipinos were jobless in June, higher than the 2.93 million in May as more people entered the labor force, including those above 65 years old, who had to look for work amid rising consumer prices.

With high inflation, Barcelona-based think tank FocusEconomics said it was expecting the Philippines’ third quarter growth to hit the slowest pace since the end of the recession that was induced by the COVID-19 crisis.

Ibon Foundation stressed that the minimum wage in Metro Manila, which is already the highest at P570 per day, is still way below the think tank’s estimated family living wage of P1,107.

It said that these highlight the urgency of expanding, not slashing, social protection, especially since the PSA reported last month that 3.50 million families, or 19.99 million Filipinos, were considered poor in 2021.

It said that well-designed ayuda that will start to improve the situation of millions of Filipinos is both urgent and necessary and is not a waste of funds as the government claims.