No more COVID-related ‘ayuda’ in 2023 budget 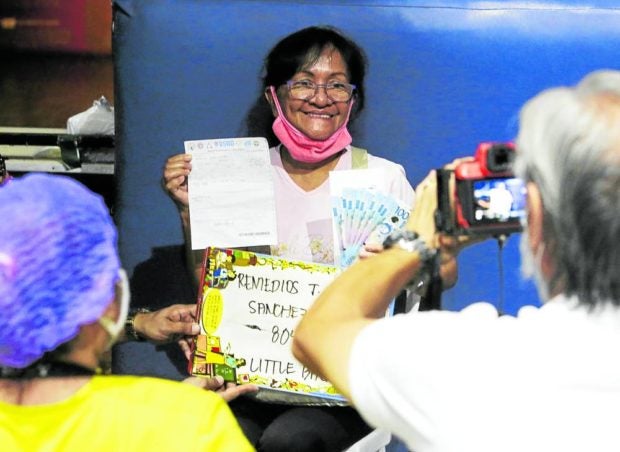 DOCUMENTATION | A resident of San Juan City poses for the camera with the money she received from the government in this 2020 photo. The cash assistance was meant to help poor families cope with the impact of the pandemic. —MARIANNE BERMUDEZ

MANILA, Philippines — The Marcos administration’s chief economic manager on Monday said there would be no more “ayuda” or doleouts related to the COVID-19 pandemic to be funded by the proposed P5.268-trillion 2023 national budget.

“As the economy recovers and full mobility is restored, there is little justification for more COVID-19-related [cash aid to the poor],” Finance Secretary Benjamin Diokno said in a statement.

Last Friday, Diokno also told the House committee on appropriations’ deliberations on next year’s spending plan that pandemic-related “ayuda” would be “a waste of public funds” amid the economic rebound.

“The Philippine economy has recovered from the unprecedented pandemic. It is now back to where it was before the COVID-19 crisis, with the opening of the economy and increasing mobility,” Diokno said.

The Philippines’ gross domestic product, or the total output of goods and services produced locally, reverted to prepandemic levels in the first quarter of this year, following the worst postwar recession in 2020 to early 2021 at the height of the most stringent lockdowns.

“With the normalization, it is more appropriate to continue the existing social protection programs, such as the Department of Social Welfare and Development’s welfare grants for poor families with children of school age, support for senior citizens, assistance to displaced workers, etc.,” Diokno said.

“The ‘ayudas’ associated with the COVID-19 pandemic, such as in Bayanihan 1 and 2, should cease as normalization is achieved and as we learn to live with the virus. These ‘ayudas’ were justified when there were lockdowns and restricted mobility of citizens,” the finance chief said, referring to the two laws which allowed the government to give away billions of pesos in cash aid to the most vulnerable households affected by the loss of jobs and livelihoods at the onset of the health and socioeconomic crises in 2020.

“But there are no more lockdowns — the president himself announced it in his State of the Nation Address. Citizens are now free to move around. Face-to-face schooling is back,” Diokno noted.

He pointed out that “public finances are finite — they have to be allocated judiciously for programs and projects that would result in the greatest benefit for the greatest number of citizens and the overall welfare.”

“We are alarmed at the statements of Diokno at the briefing for the proposed 2023 national budget. It seems that his concept of being ‘fully recovered’ from the pandemic is simply not having lockdowns and does not consider the rising numbers of jobless in the country, the rising cost of basic goods and services, and the 19.9 million poor Filipinos,” Castro said in a statement on Monday.

“Is the government no longer responsible to help those who have not yet recovered from two years of the pandemic just because they could already go out?” she asked.

“This is a patently antipoor statement, considering that many Filipinos are still reeling from the effects of the COVID-19 pandemic. We must also remember that we are still in a pandemic and more than 2.3 million Filipinos are now added to the already poor 19.9 million based on the National Economic and Development Authority’s figures,” Castro said.

“Apart from this, more Filipinos lost their jobs and more businesses closed shop. Wages for teachers and laborers are still low and insufficient. It is clear that we are still in a pandemic and not everyone has recovered from it,” Castro said.

She added: “Many Filipinos need aid now. Just look at those lining up at the Department of Social Welfare and Development. Instead of saying that people do not need assistance, we should even increase the aid being given to them.”

For the lawmaker, “if the finance chief is so concerned about ‘wasting public funds,’ then he should support increasing taxes of the rich and should not have given tax breaks to big corporations,” referring to the Corporate Recovery and Tax Incentives for Enterprises (CREATE) Act.

Diokno has also been lukewarm to the proposed “wealth tax” on the ultra-rich as proposed by militant legislators, citing possible capital flight.

“Bakit kapag binibigyan ng ayuda ang mga mahihirap, ‘waste of public funds’ daw, pero kapag ang mga mayayaman ang binabawasan ang singil ng buwis ay positibo ang pagtingin (Why is it a ‘waste of public funds’ if the poor are given ayuda, yet it’s looked at positively when taxes of the rich are reduced). This only shows that the proposed 2023 national budget is antipoor. The economic managers would rather discontinue the distribution of ‘ayuda’ than collect more taxes from the rich and big corporations. We must remind our economic managers that their salaries are also from public funds and they should empathize with the poorest Filipinos,” Castro said.