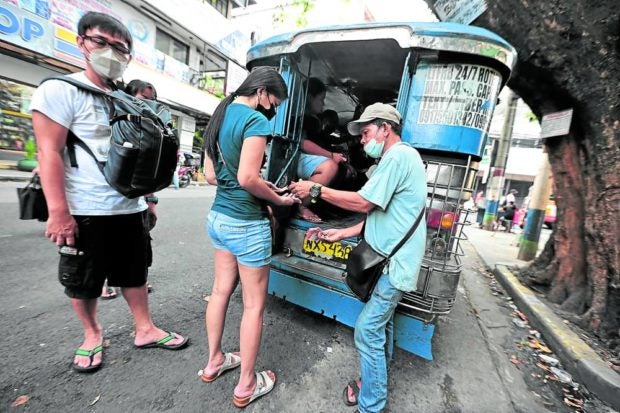 PUBLIC RIDE Passengers queue at a jeepney terminal in Manila on Monday. The Land Transportation Franchising and Regulatory Board next month will decide on a petition seeking to increase the current P11 minimum jeepney fare. —GRIG C. MONTEGRANDE

MANILA, Philippines — Another round of jeepney fare hikes is due by September, the Land Transportation Franchising and Regulatory Board (LTFRB) said, as it prepares to decide on a petition by jeepney drivers’ groups to raise anew the minimum fare after the P11 approved in July.

Apart from that petition by 1-Utak, Pasang Masda, the Alliance of Transport Operators and Drivers Association of the Philippines (Altodap), and the Alliance of Concerned Transport Organizations (Acto), there are other pending petitions by groups operating buses, UV Express vehicles and other modes of public transport for their respective fare adjustments.

But the LTFRB is due to decide first on a new fare hike for jeepneys.

Speaking to reporters on Monday, LTFRB Chair Cheloy Garafil said jeepney fares “are due for an increase already.”

She said the LTFRB would decide on a “reasonable and balanced fare hike” by the first week of September at the soonest.

“This is just a question of how much we’re able to give without causing a huge impact on inflation and on the purchasing power of commuters who would bear the brunt of the fare hikes,” she said.

Garafil cited a study by the National Economic and Development Authority which the LTFRB used earlier to grant the provisional jeepney fare hike last July, as she noted too the inflationary effect even of an increase of P1 in transport fares.

Jeepney drivers, in particular, are still seeking an increase of P5 to P6.

But the LTFRB noted that a staggered P2 had already been granted, with a fare hike to P10 in June and another increase to P11 the next month.

The agency said it was deliberating over the remaining P2 to P3 from the proposed fare hike originally sought by jeepney drivers.

As board chair, Garafil constitutes one vote on the petitions.

“My personal take is that we need to recognize the conditions of our jeepney drivers and that there is really a need to increase the fares,” she said.

The petitioners, arguing the urgency of raising the minimum fare, noted the end of the LTFRB’s fuel subsidy program early this year as well as the big-time fuel price increase which took effect on Tuesday.

Oil companies usually announce their price adjustments for their products every Monday, to take effect the following day.

On Monday they announced in separate advisories that prices of diesel and kerosene would climb by P6.10 per liter and gasoline, by P1.40.

This was the second time in a week that pump prices were raised, after last Monday’s increase in gasoline prices by 70 centavos per liter, diesel prices by P2.60, and kerosene prices by P2.80.

Prior to that, on Aug. 16, oil companies implemented a price decrease in gasoline by P0.10 per liter, diesel by P1.05 per liter and kerosene by P0.45 per liter.

But the price rollbacks are minimal compared with the increases incurred since the start of the year.

Higher demand for petroleum in other countries nearing their harvest or winter season pushed fuel prices up, said Rodela Romero, assistant director of the bureau.

The limited oil supply and the continuing conflict between Ukraine and Russia also put upward pressure on fuel prices.

The Asian bellwether Dubai crude continued to hover at the $96 per barrel level as of Monday.