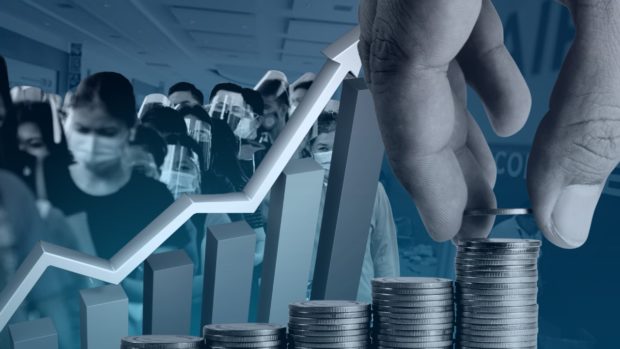 MANILA, Philippines—While President Ferdinand Marcos Jr. expressed disbelief at the June 2022 inflation rate announced by state statisticians, saying that “we’re not that high,” the Philippine Statistics Authority (PSA) declared that it “stands by its data.”

The PSA said on Tuesday (July 5) that the Philippines’ inflation rate hit 6.1 percent last month, the highest since the rice crisis in October 2018, when the inflation rate was 6.9 percent.

National Statistician Dennis Mapa stressed that higher food, fuel and transportation costs, as well as costlier alcoholic beverages and cigarettes, contributed the most to last month’s inflation rate, which is higher than May’s 5.4 percent.

However, Marcos disagreed with PSA’s data, saying that “I think I will have to disagree with that number.” This, even as he admitted that the inflation rate may breach the government’s target—3.7 percent to 4.7 percent.

Marcos, however, would later backtrack and agree with the PSA numbers.

Since Marcos did not explain why he disagreed with the PSA data, Sonny Africa, executive director of Ibon Foundation, said it should be a reason for concern: “[He] disagreed with [the] 6.1 percent inflation data but didn’t say why.” 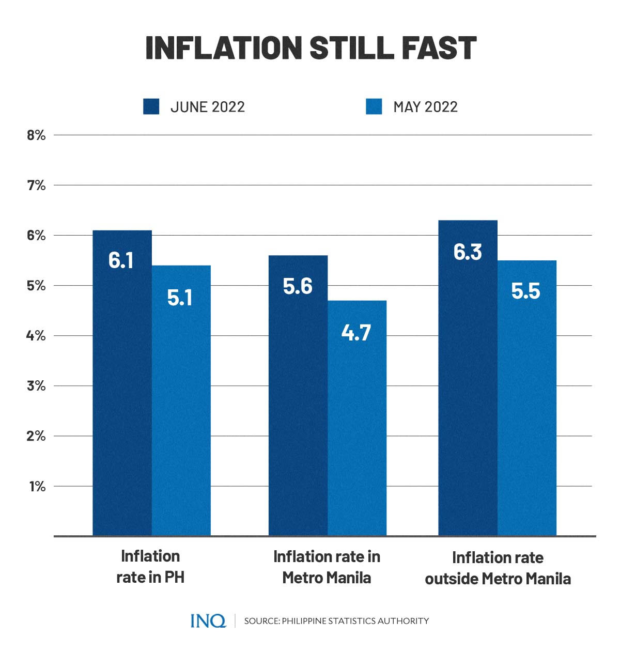 “Of course, it’s good to not [treat] statistics as automatically facts because these can be wrong or even mislead at times. However, questioning them should also be accompanied by an explanation which Marcos did not even bother to provide.”

Africa stressed that “no matter how inconvenient, facts are essential to come up with real solutions—and accelerating inflation amid collapsed family incomes demands urgent solutions.”

“The president is the country’s chief economic manager who is expected to tackle the huge social and economic crisis millions of Filipinos are suffering,” he told INQUIRER.net on Wednesday (July 4).

Not yet on its peak

Bangko Sentral ng Pilipinas (BSP) Governor Felipe Medalla said consumer prices will “in all likelihood” exceed the government’s target this year and take “many months” to sink back below the level deemed manageable and conducive for economic growth.

State statisticians determine inflation by looking at the consumer price index (CPI), which is an indicator of changes in the average retail prices of a fixed basket of common goods and services.

Mapa stressed that based on data from the ground, prices “will still move upward” in the coming months, saying that “it’s a very steep slope every month.” Back in 2018, the inflation rate hit 6.6 percent in August and 6.9 percent in September and October. 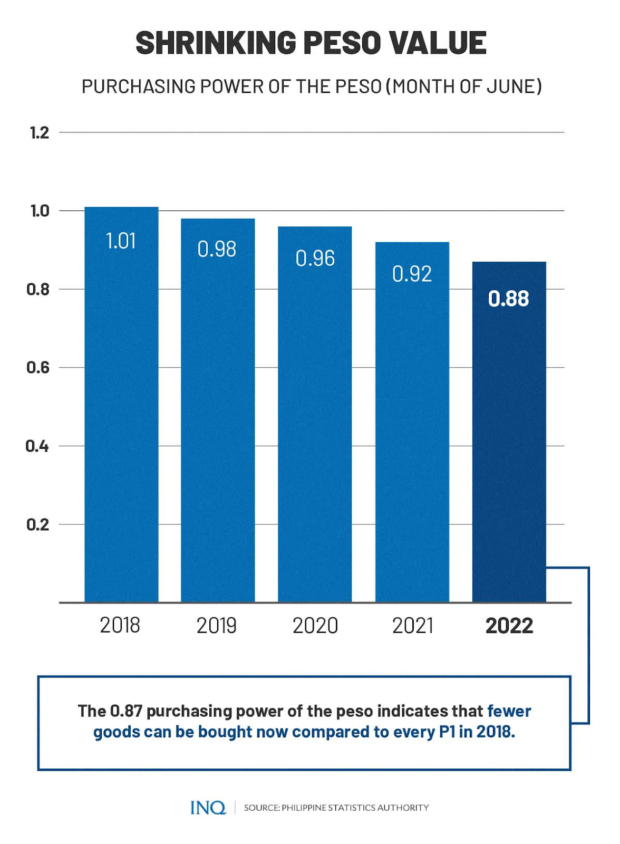 While the PSA could not specify whether supply or demand was driving the rise in domestic prices, Mapa said it was mostly coming from costly oil globally spilling over locally, especially on food products.

Africa said the inflation rate will keep rising as high fuel prices and the shrinking peso still work their way through the system: “It does not look like the global factors for these will subside anytime soon.”

Based on data from the Department of Energy, the week-on-week price of Dubai crude from June 27 to July 1 increased by $3.45 per barrel while the MOPS—the daily average of all trading transactions of diesel and gasoline—fell by $10 per barrel and $2.50 per barrel.

It said that since Tuesday, oil companies implemented a rollback in fuel prices: P3 per liter of diesel and P3.40 per liter of kerosene. There was no movement on the price of gasoline.

As of Wednesday, year-to-date changes stand at a net increase of P42.90/liter for diesel and P36.35/liter for kerosene, while that of gasoline is still P30.00/liter, the DOE said.

For Africa, the considerable resources needed for an effective response can only come from cutting excessive infrastructure spending and debt service, or from expanding fiscal space with a billionaire wealth tax and other progressive tax measures.

The PSA said that the high inflation rate last month was brought by a higher annual growth rate in the prices of food and non-alcoholic beverages, which saw a rise from 4.9 percent in May to 6.0 percent in June. 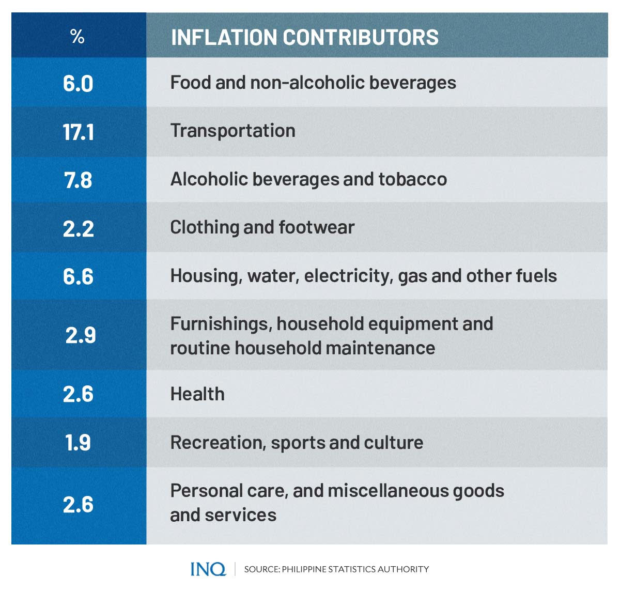 The yearly growth rate in the index for transportation likewise rose from 14.6 percent in May to 17.1 percent in June. Mapa said annual increase were also high in the indices of these commodity groups:

Inflation for food at the national level even rose to 6.4 percent in June, from 5.2 percent in May. In June 2021, food inflation was lower at 3.9 percent. The acceleration was primarily influenced by the higher annual growth in the meat index at 8.1 percent. 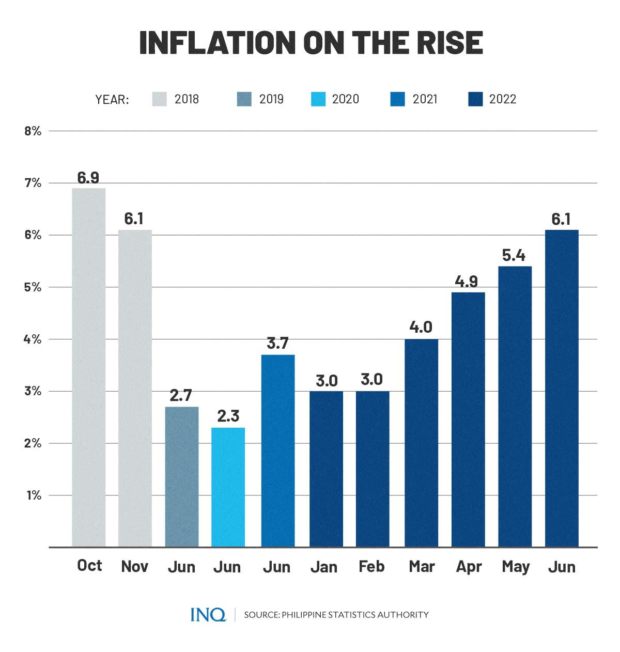 The fruit and nuts group also contributed to food inflation as it registered an inflation rate of 1.1 percent, from -2.4 percent in May. The rest of the food groups exhibited faster yearly growth rates, except for vegetables and plantains groups.

Last month, the inflation rate also went higher in all of 17 regions—a phenomenon which Mapa said was not the usual. “It’s not extraordinary, but the impact is wide,” he said.

RELATED STORY: Charting the cycle of hunger in PH: It’s always there

Harder for the poor

Africa said that rapidly rising prices bear down most heavily on the poorest 19 million Filipino families who don’t have any savings and also consider themselves poor or borderline poor.

RELATED STORY: Palace: A lot more must be done to lift Filipino families out of poverty

“Every increase in prices means they are able to buy and consume less which means worsening household welfare,” Africa said, stressing that there’s no avoiding the allocation of resources for every measure to give emergency relief.

“Likewise with every measure to deal with the structural causes of high prices like ensuring food self-sufficiency, regulating or nationalizing oil, and reducing import-dependence,” he said.

This was why Marcos should communicate well with the public, Africa said. He stressed that “it’s possible that he meant something else but, even then, his ‘disagreement’ at the very least reflects badly on his skills as an economic manager which involves communicating with his economic team as much as with the general public.”

The PSA likewise stated that the purchasing power of the peso eroded to P0.87 in June—the lowest to date—since the CPI was rebased to the year 2018. Mapa said this meant that fewer goods can be bought now compared to every P1 four years ago.

Marcos said the Philippines is grappling with imported inflation because of the peso’s weakness against the dollar. Last week (June 29), the peso closed at P55.06, its weakest since October 2005.

“Our monetary policy is essentially to use the interest rate to hold, to control the inflation rate. We’re not looking specifically at exchange rates now,” he said.

Now, with the rising inflation rate, Marcos said that “we have to think about interest rate levels,” which are one of the tools employed by central banks all over the world to stabilize inflation.

The Bangko Sentral ng Pilipinas said “it is prepared to undertake necessary policy actions to bring inflation back to a target-consistent path over the medium term and deliver on its primary mandate of price stability.”

“The upward adjustment in monetary policy rates in May and June should help temper inflation expectations,” said the BSP, which hiked key interest rates for a total of 50 basis points in May and June.

“At the same time, the BSP reiterates its support for the carefully coordinated efforts of other government agencies in implementing non-monetary interventions to mitigate the impact of persistent supply-side factors on inflation,” it said.