MANILA, Philippines—The numbers that emerged in a survey on poverty during the pandemic by a United Nations agency and a Philippine non-government organization are showing what people on the ground may already know—people are sinking deeper in poverty.

Francis Capistrano, the United Nations Development Program (UNDP) Philippines’ head of experimentation, said that the poor “continue to struggle from the disproportionate impacts” of the COVID-19 crisis.

Last Tuesday (Aug. 31) Capistrano presented the findings of the third phase of the survey COVID-19 Pulse PH that was initiated by the UNDP and Zero Extreme Poverty (ZEP) 2030, a local NGO, that offer a glimpse of how the Filipino poor is living through the pandemic. 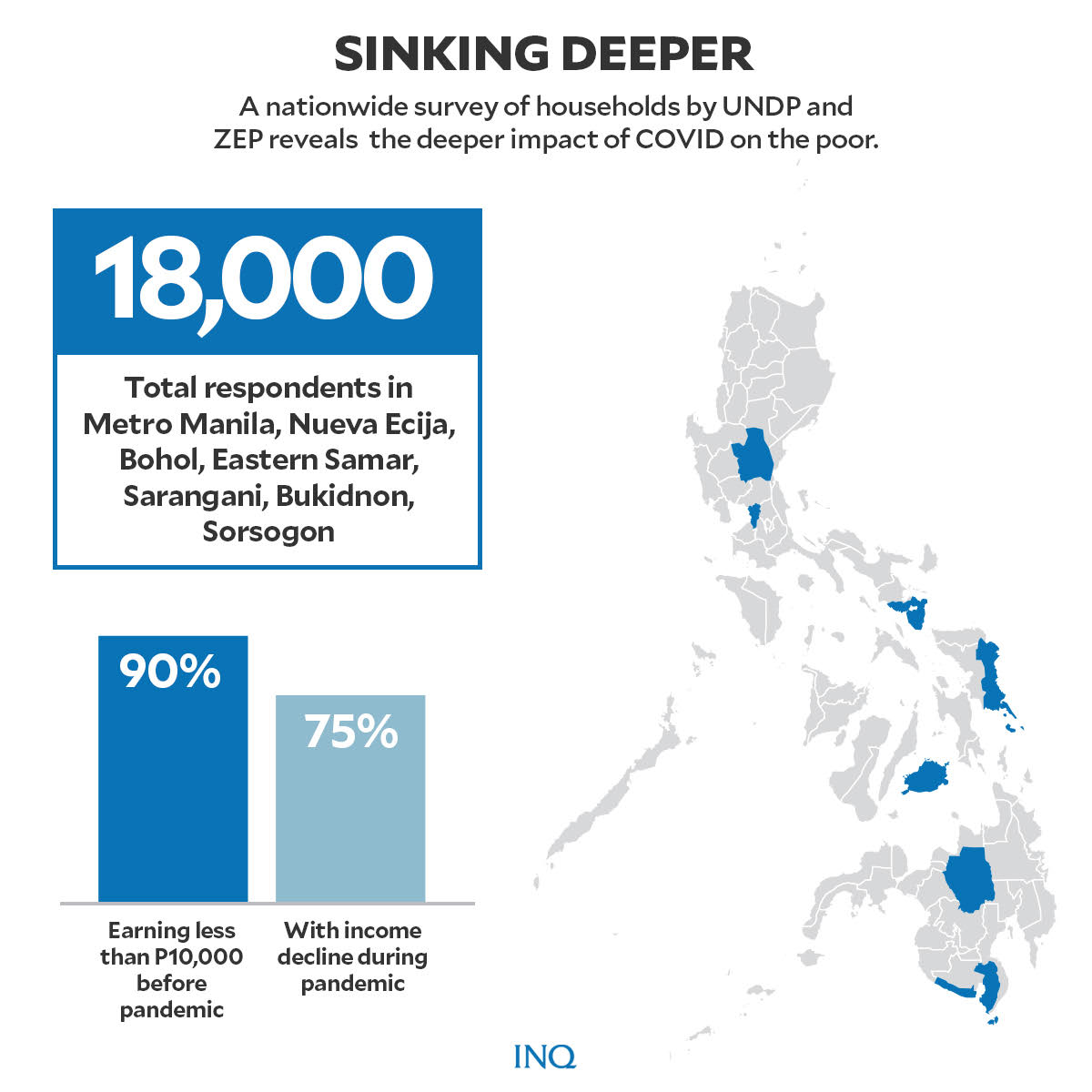 COVID-19 Pulse PH asked more than 18,000 low-income households in Metro Manila, Nueva Ecija, Bohol, Eastern Samar, Sarangani, Bukidnon and Sorsogon about their economic conditions during and shortly before the pandemic. 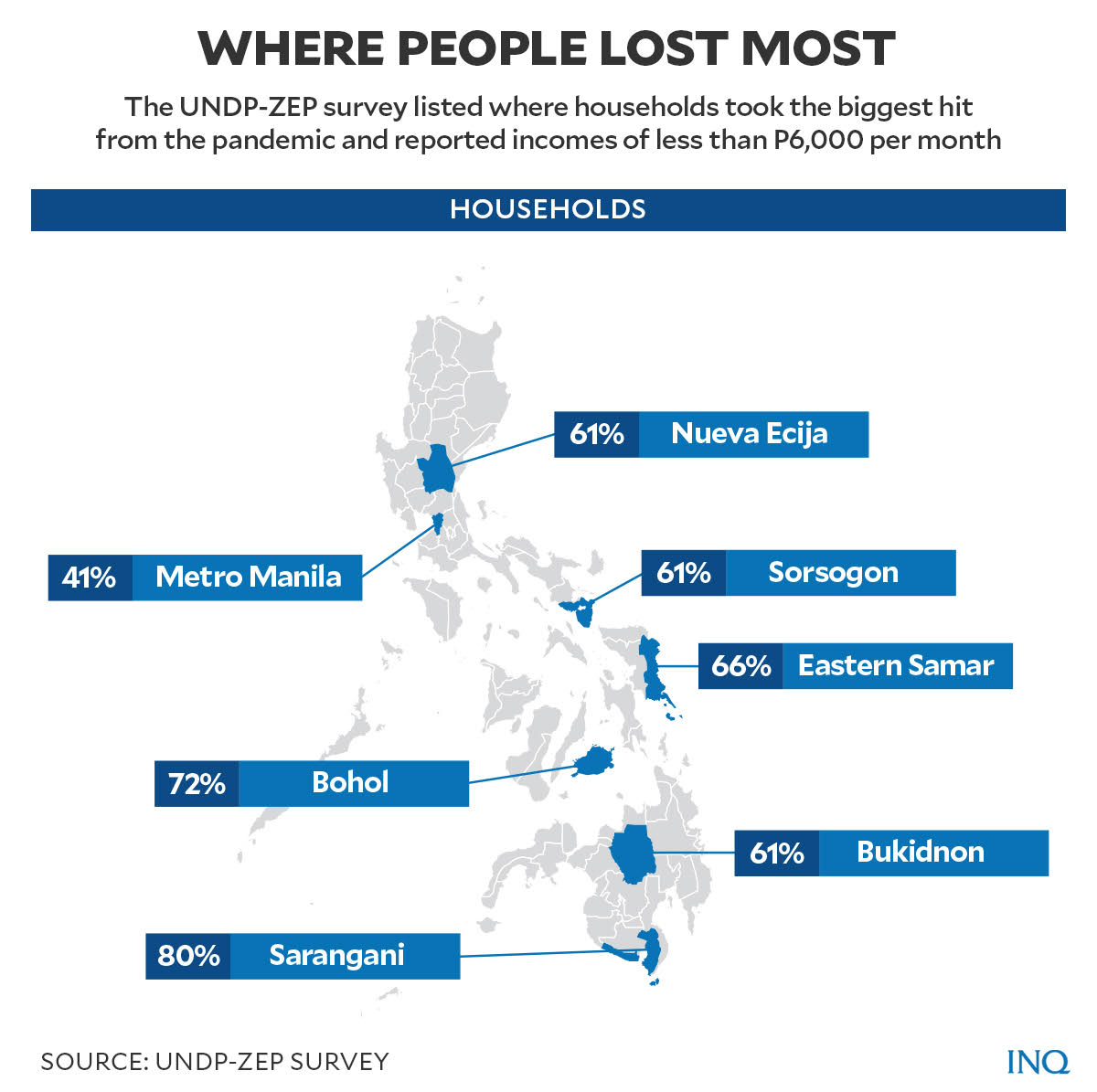 However, with restrictions and hard lockdowns imposed by the government since 2020, 75 percent experienced a decrease in their already insufficient income.

Dianne Galarosa, a flower vendor, told INQUIRER.net that, like those asked by the UNDP and ZEP, her income decreased since 2020.

“In 2019, I could sell a lot so I had a higher income to finance my needs and my household but because of COVID-19 restrictions, my sales weakened,” she said.

The UNDP report said that while the impact of the crisis has been concentrated in densely populated metropolitan areas, “its effects on incomes and livelihoods were felt nationwide.”

Galarosa said she’s doing everything to make a living in the midst of the pandemic but “it’s really hard now.”

READ: Poor fend for themselves amid gaps in gov’t pandemic response

She said that before the start of the COVID-19 crisis, she had been earning P10,000 a month. Now, the highest she can earn from her sales is P6,000 per month.

The 18,000 poor households asked by the UNDP and ZEP consisted of 56 percent from the informal sector—seasonal or casual workers, ambulant vendors or those with unregistered business, dependents, and those receiving pension.

The remaining 44 percent was from the formal sector—contractual workers, permanent or regular workers, and those with registered small business.

The UNDP and ZEP report said that 58.2 percent of the surveyed households said that their income “worsened” in March 2021 compared to last year, 29.6 percent said that it was still the same, while 12.1 percent said it improved.

Marites Busto, a lugaw (porridge) vendor, said that over a year since the start of the COVID-19 crisis, her situation has not improved but even worsened.

“It remains hard for us to cope, especially because we don’t have a choice when we are being told to temporarily stop when restrictions and hard lockdowns are imposed,” she told INQUIRER.net.

The 58.2 percent of respondents said the following were the reasons for their loss of income in 2021: 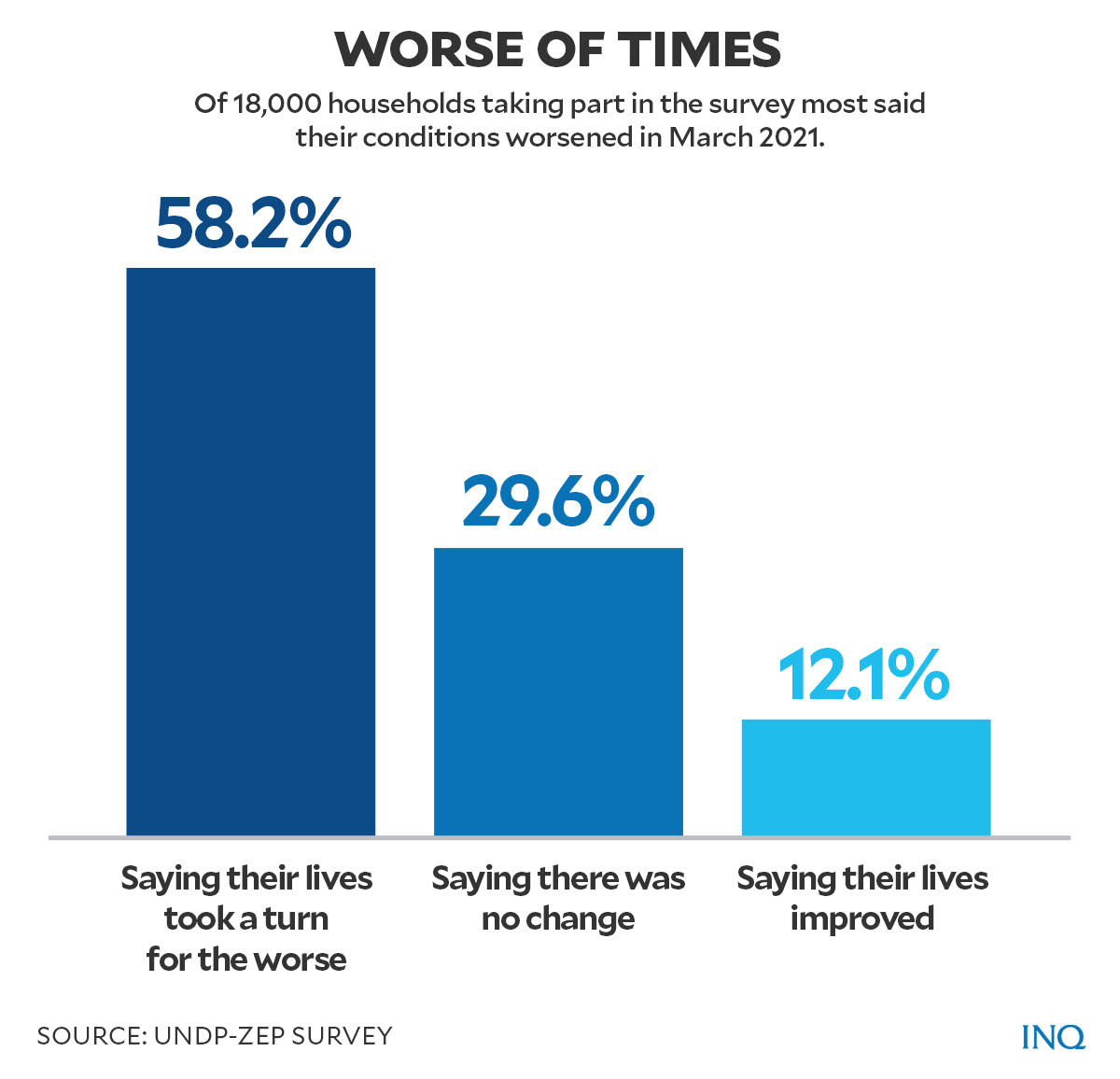 In the provinces, Sarangani reported the highest rate of families whose incomes worsened (74 percent) followed by Nueva Ecija (69 percent) and Bohol (65 percent).

The report said that 47 percent lost work or business, 41 percent experienced hunger, 36 percent had difficulty in accessing health services and 10 percent had to make their children stop schooling even online. 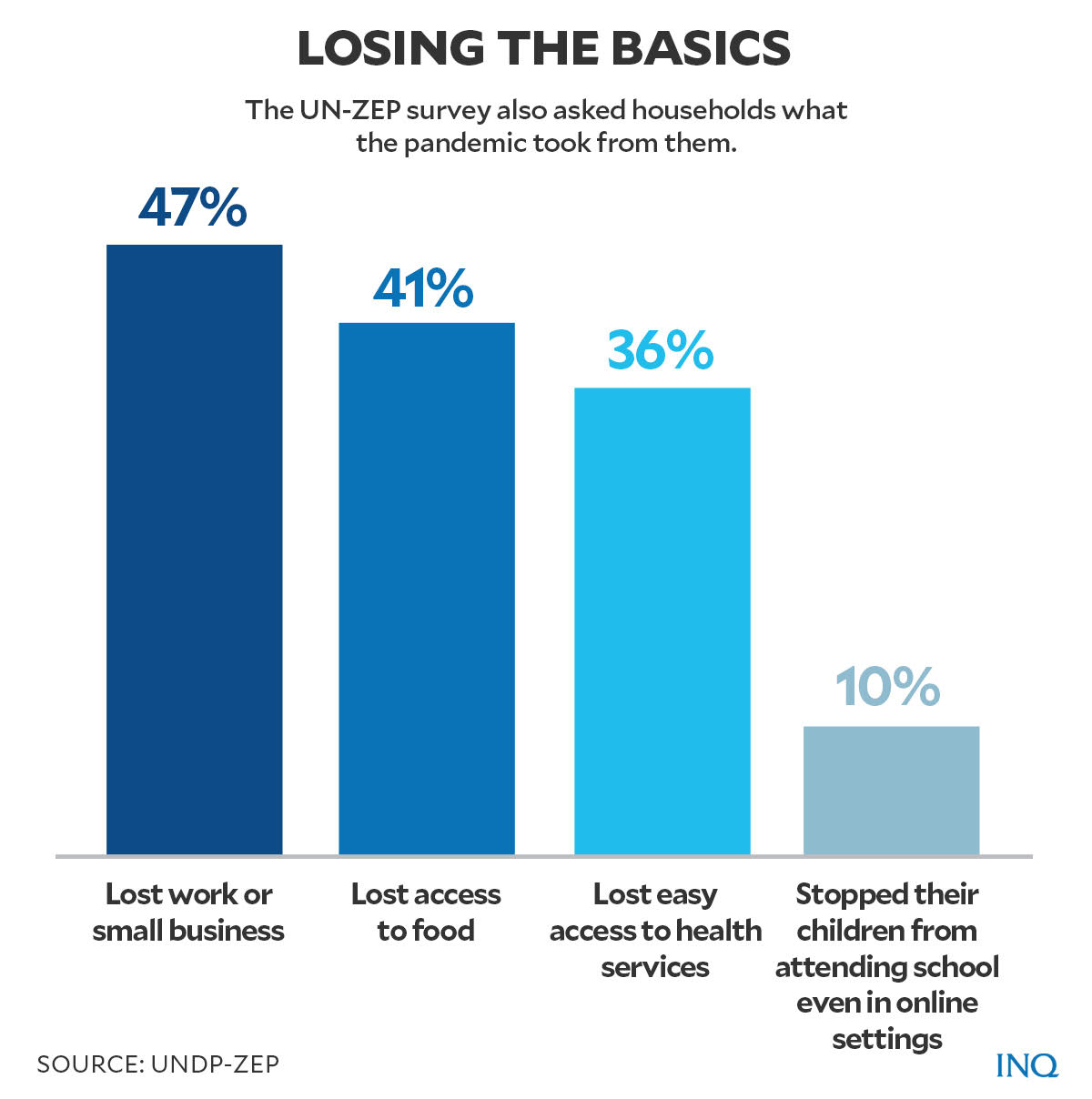 The UNDP and ZEP said that the third phase of the COVID-19 Pulse PH likewise wants to check on the Filipino poor’s “outlook for the future.”

Based on the report, when asked to name three assets and capabilities that could help them thrive in the new normal, the households said the following:

With the impact of the COVID-19 crisis, the respondents said that it is also important to have savings for emergencies or capital for business, support from family and friends, and access to government assistance.

As they hope for a “better normal,” the respondents said their dreams were about steady livelihood  (76 percent), enough food and basic needs (69 percent), and quality education for their children (41 percent).