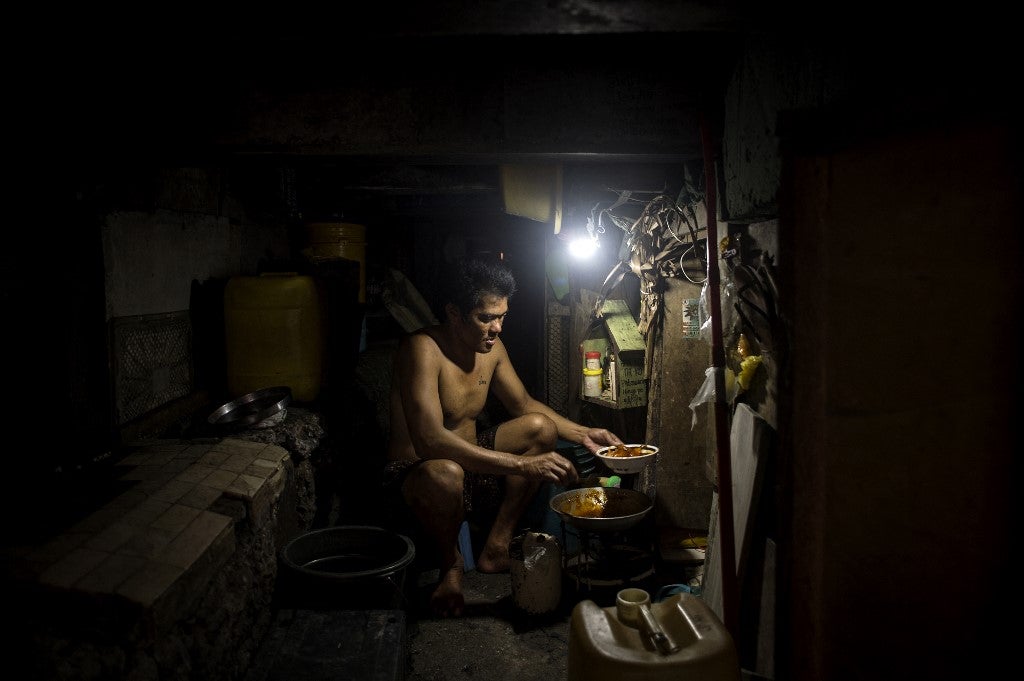 MANILA, Philippines — Many poor Filipino families might have thought they had already hit rock bottom before the COVID pandemic struck. At the bottom of many things, there would have been no option but to rise.

But the bottom kept sinking deeper for millions of Filipinos, especially when the pandemic struck.

Last May, a youth group in Isabela province distributed relief goods to families whose livelihoods were ruined by COVID lockdowns.

Remedios Ortiz, 45, was one of the hundreds who stood in line for hours to get help.

A mother of six, Remedios and her husband struggled to make ends meet before the pandemic. When the pandemic struck, what the couple thought was already the pit grew darker.

As Remedios received a bag with food and essential items from the youth group, she said in Ilocano: “We now have food to eat for this week.”

“My children will have food to eat,” she said. “I am thankful because they will not experience hunger, at least for a few days.”

The Remedios family is just one of the millions of Filipino families fighting hunger regularly, with the COVID health crisis making matters worse.

Numbers can sometimes mirror but not always comprehend their plight.

Last Monday (July 12), the Social Weather Stations (SWS) said 16.8 percent, or an estimated 4.2 million families, experienced hunger “due to lack of food to eat” at least once in the past three months. 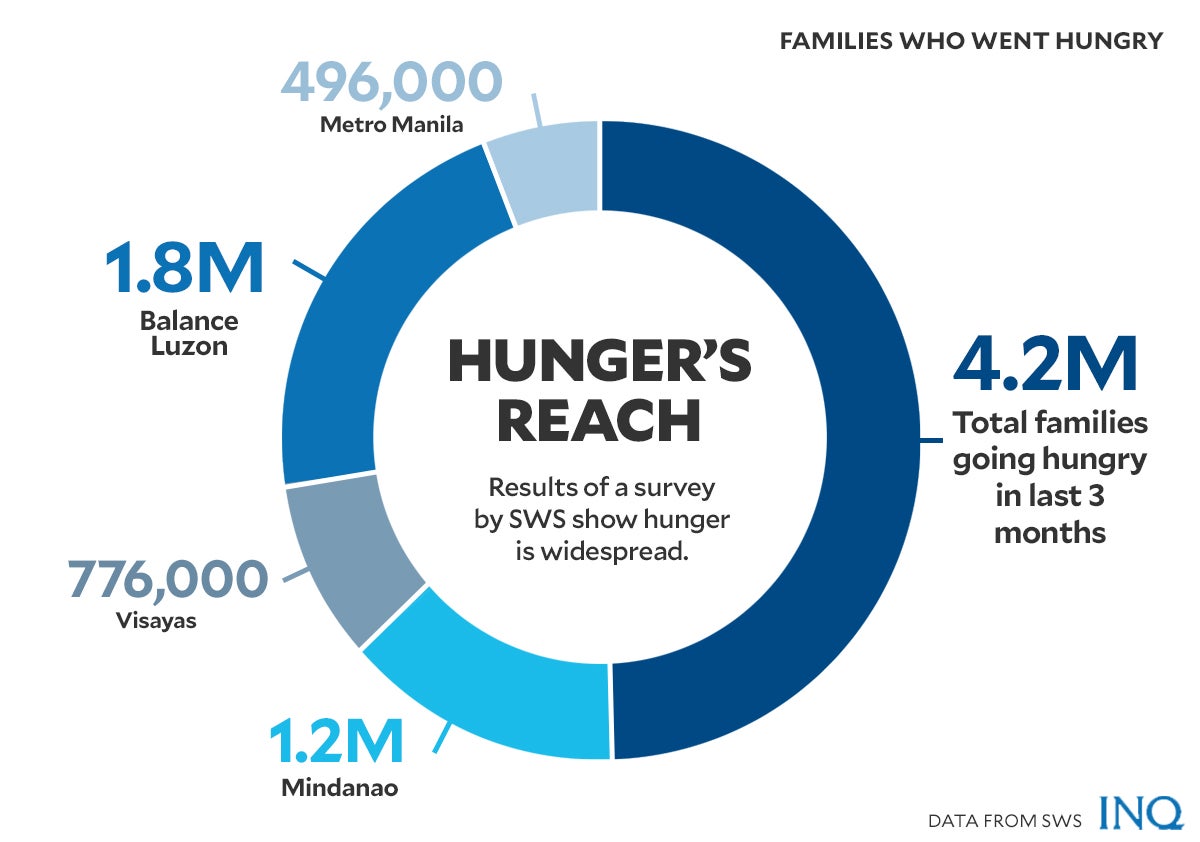 Residing in one of the barangays in Alicia town, Isabela province, Remedios and her family live solely on the income of Robert, her husband and a farmer, and her own earnings as a house help.

Remedios said her family was already living in poverty even before COVID struck, prompting quarantines that kept people indoors but which Remedios said made life tougher for them. 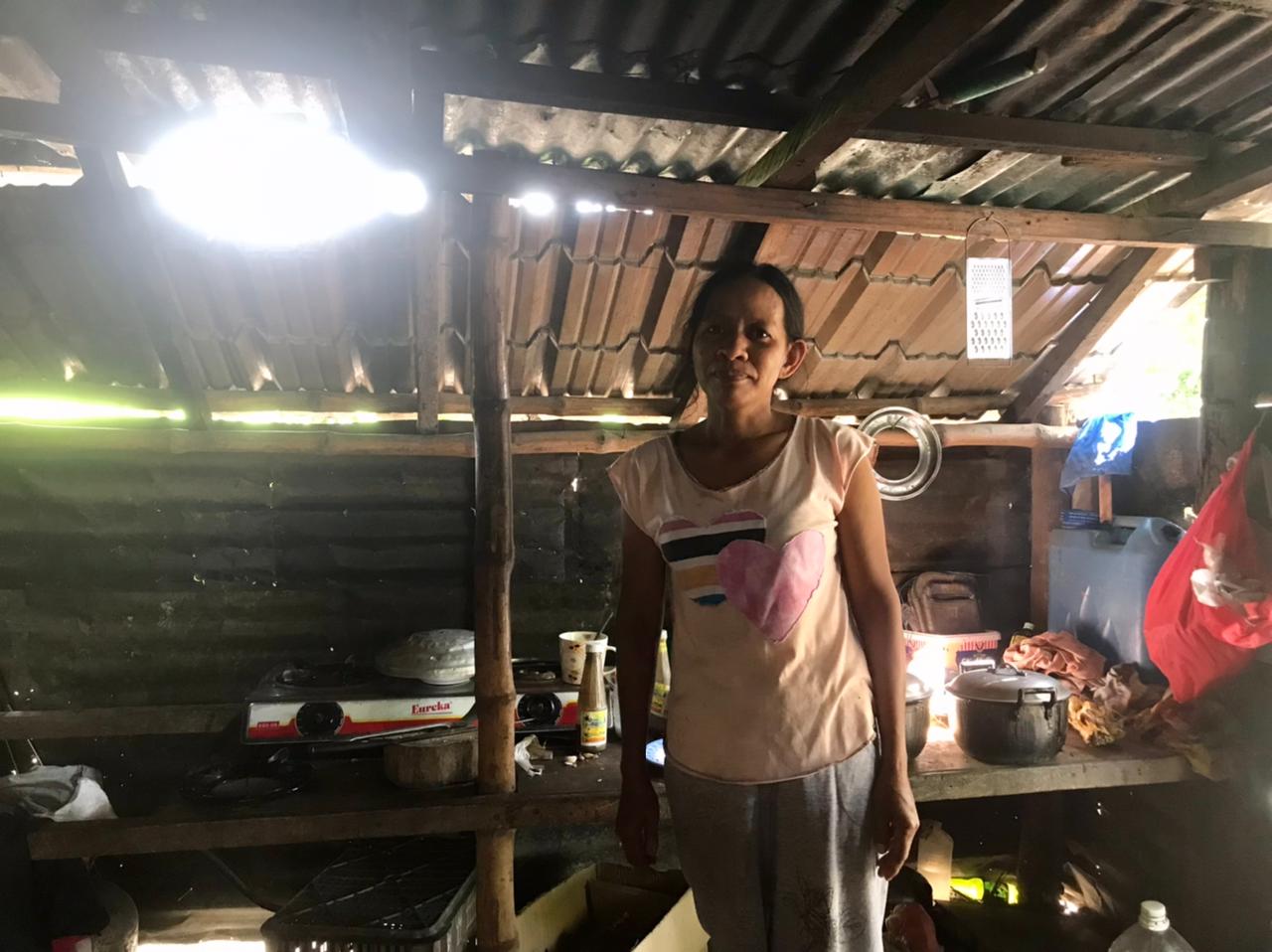 Remedios Ortiz tearfully narrates her family’s plight as she stands in front of her kitchen, which has nothing except rice and fish sauce. PHOTO BY KURT DELA PEÑA

In 2020, the World Food Programme said millions of people worldwide “suffer from acute hunger.” It added that the COVID-19 pandemic “could now double the number, putting an additional 130 million people at risk of suffering acute hunger by the end of 2020.”

Because her husband cannot work in towns outside Alicia, especially during the worst of the year 2020, Remedios’ family struggles to survive on P200 a day.

The money should cover everything they need – food, hygiene products and others. With P200 per day, Remedios said it was “hard to have enough meals, especially for a family of eight.”

“My husband was not able to work outside the town,” Remedios said of the opportunity loss her husband suffered during the lockdown.

“That means he will not be able to bring home a bigger amount of income if compared to what he had before COVID-19. For my part, I am working as a house help,” she said.

In the same SWS survey, 32 percent of families rated themselves as food-poor, 23 percent were considered not food-poor while 45 percent thought themselves to be on the borderline.

Remedios said while her family often gets to eat three times daily, they do not consume enough food to meet their bodies’ needs, especially when they are doing farm tasks.

“A can of corned beef and sardines are not enough for a day, especially because we are a family of eight,” she said.

After lining up at the church where the youth group distributed relief goods, she returned home with canned goods, noodles, vegetables, beans, rice, eggs, and fish that she considered to be “enough for days.” 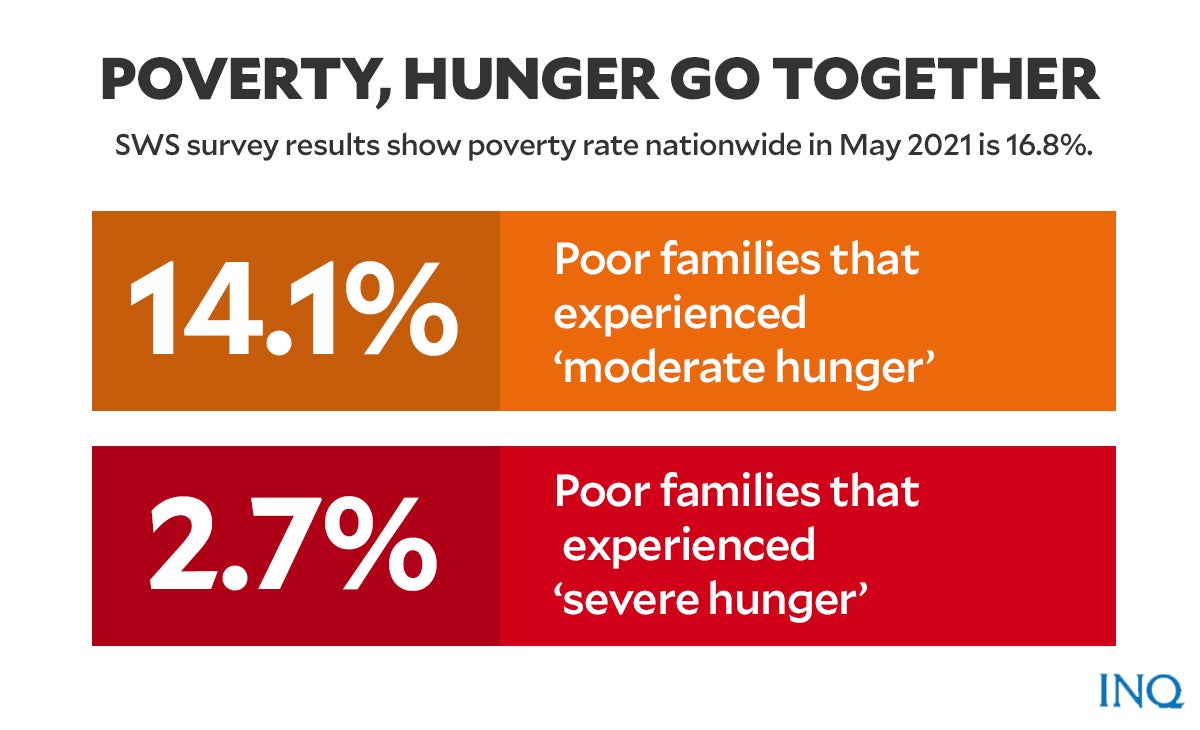 The United Nations included “Zero Hunger” as one of its Sustainable Development Goals, but it said that “after decades of steady decline, the number of people who suffer from hunger—as measured by the prevalence of undernourishment—began to slowly increase again in 2015.”

Nearly 690 million people, or 8.9 percent of the world’s population, are estimated to be hungry based on current estimates.

“The world is not on track to achieve Zero Hunger by 2030. If recent trends continue, the number of people affected by hunger would surpass 840 million by 2030,” said the UN. 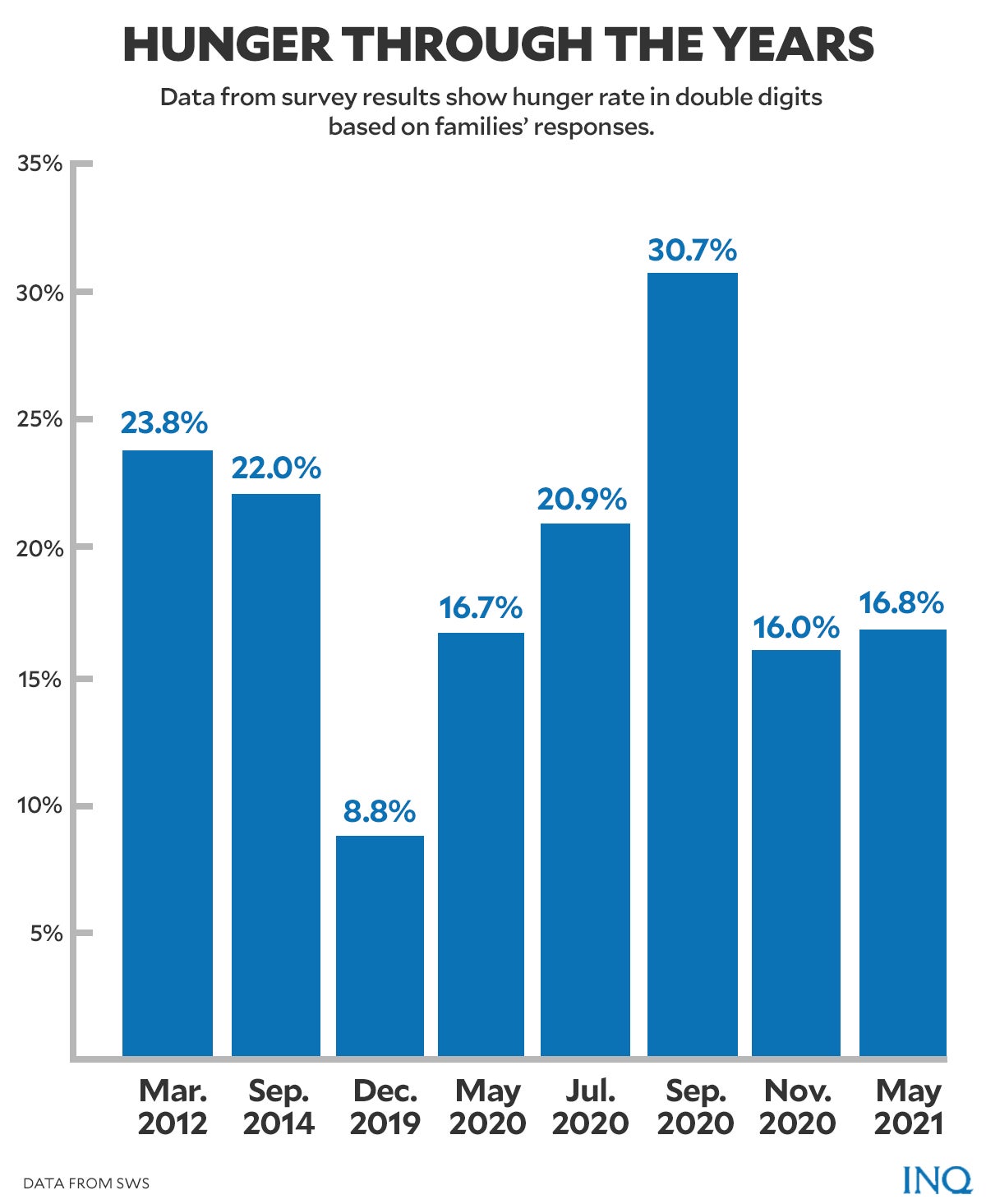 In September 2020, six months after the start of the lockdown, the SWS reported a record-high 30.7 percent, or 7.6 million families, going hungry, which surpassed the previous peak of 23.8 percent that was recorded in March 2012. 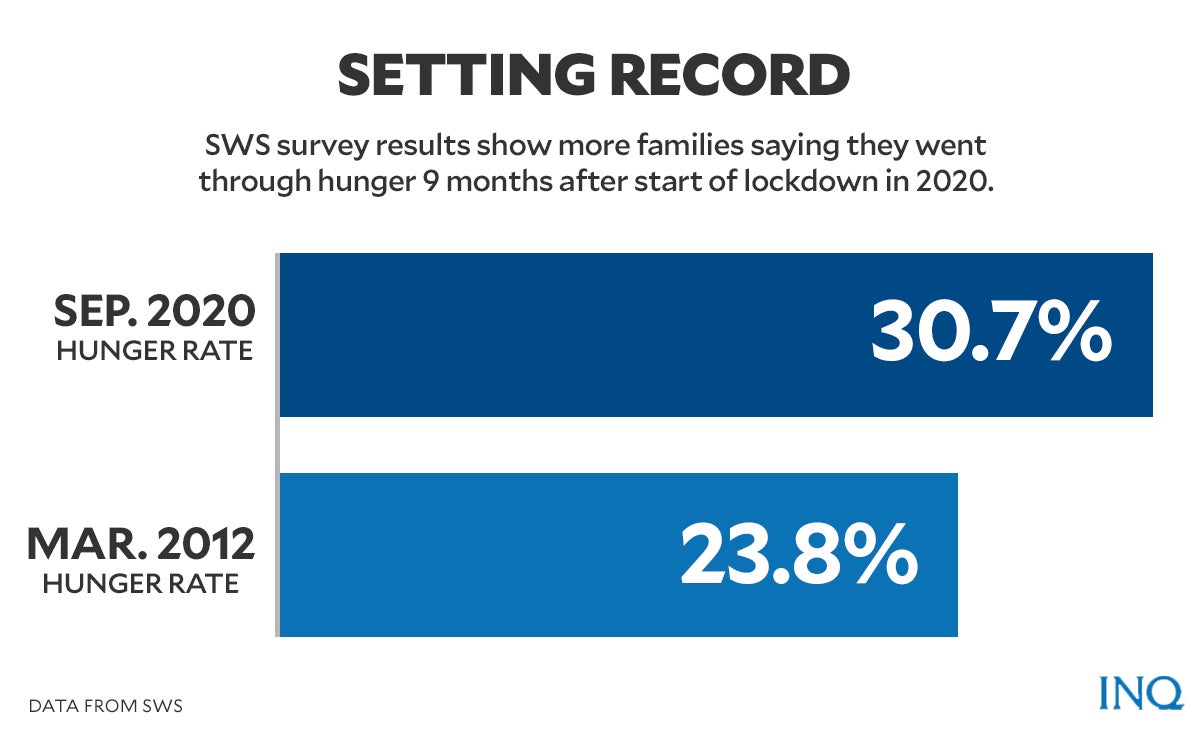 Remedios’ family “grappled with the effects of the health crisis for months,” saying that cash aid would be helpful.

She heard about the proposed Bayanihan 3, which allocates P401 billion to fund COVID response and recovery efforts, including the distribution of cash aid. But it isn’t a law yet.

In June, Sen. Risa Hontiveros urged the government to accelerate the disbursement of funds from Bayanihan 2 before it expires.

“We already have the money but that could be gone in an instant,” the senator said.

“We only have a few days before those funds expire but with the slow pace of spending, it’s already been given two chances,” she said.

“While that’s just sitting around, more and more people are getting desperate in a time of crisis. When are we planning to use that money?”

Last February, presidential spokesperson Harry Roque, who wants to run for senator in 2022, said 25 percent, or about one-fourth, of the P165.5 billion in Bayanihan 2 funds for COVID response and recovery has yet to be released.