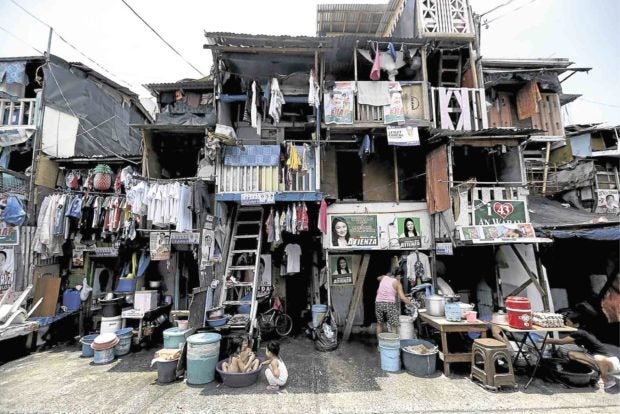 MANILA, Philippines — The latest surveys on self-rated poverty said that only 17 percent of Filipino families felt they were not poor compared to 46 percent who said that they felt poor.

According to the Social Weather Stations (SWS) survey released on Friday, 49 percent of families surveyed from April 28 to May 2 — or around 12.4 million across the country — described themselves as poor.

Figures are somewhat similar to numbers obtained last November 2020, although the percentage of people who said they were poor is higher than the previous 48 percent.  On the other hand, 33 percent of respondents said they are borderline poor in November, while 16 percent said they do not qualify as poor.

Of the families who rated themselves as poor, 9.4 percent did not consider themselves poor one to four years ago, thus placing them in the newly poor category.

Even though the number of Filipinos who perceive themselves to be poor is not too far from pre-COVID-19 levels — as self-rated poverty was at 45 percent on average for 2019, — people who believe they are not poor have not yet returned to pre-COVID-19 levels.

As an average for 2019, 24 percent of households then believed that they are not poor — a seven percentage point difference to the latest data.  The number of those who consider themselves borderline poor is slightly higher in May 2021, at 33 percent, compared to 2019’s 31 percent.

The high self-rated poverty numbers — and the data on the lower number of families who say they are not poor — were obtained over a year since the COVID-19 pandemic altered the country’s normalcy and economic growth.

In 2020 alone, the Philippine economy shrunk by 9.5 percent, making it the worst figure since statisticians started recording gross domestic product numbers after the Second World War.

Other SWS figures also back up the devastating impact of the pandemic over the country: after the adult unemployment rate reached a record-high of 45.5 percent in July, Filipinos still believed they were poor or food-poor even after the economy was partially opened.

While the country recorded depressing figures for self-rated poverty, the number of Metro Manila families that considered themselves poor decreased from 42 percent in November 2020 to 30 percent in May 2021.

However, the percentage of families in the capital region that say they are not poor also decreased from 45 percent to 39 percent.  Consequently, the number of borderline poor increased from 14 percent in November 2020 to 31 percent in May 2021.

Overall, comparing numbers from November 2020 and May 2021, self-rated poverty increased in all locales, except in the Visayas:

SWS said that the survey was conducted through face-to-face interviews of 1,200 adults subdivided into 300 each from Metro Manila, Balance Luzon, Visayas, and Mindanao.

The polling firm maintains sampling error margins are ±3% for national percentages and ±6% for Balance Luzon, Metro Manila, the Visayas, and Mindanao.