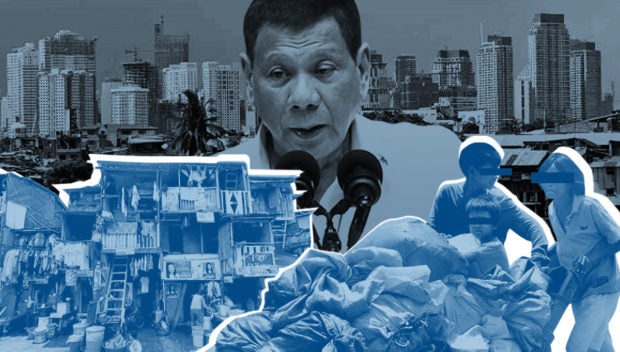 That’s because, according to Social Weather Stations (SWS) president Mahar Mangahas, the government’s latest Family Income and Expenditure Survey (FIES) was in 2018 yet. New data from FIES, which could be a gauge of poverty nationwide, won’t be available until 2022, should FIES be done during the pandemic, Mangahas said in his Inquirer column last July 17.

But results of the SWS’ poverty report for May 2021 showed an alarming set of data: 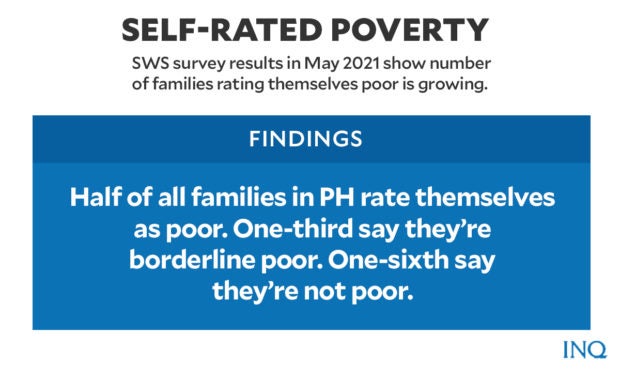 According to Mangahas in his column, the numbers were “essentially unchanged” from the SWS’ previous report in November 2020, when face-to-face field work, required for poverty self-rating, resumed. 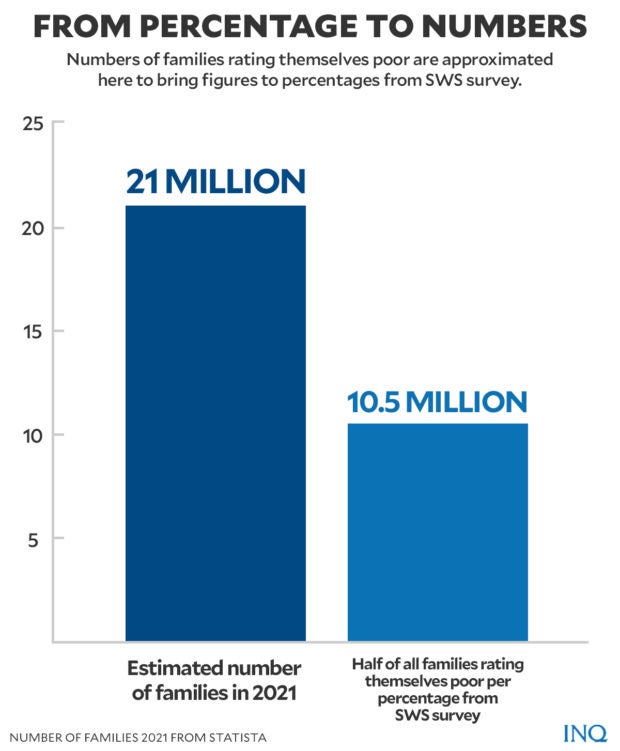 According to the Philippines National Demographic and Health Survey of 2008, there are nearly five people (4.8) per family in the Philippines. If half of all the families in the country rated themselves as poor, that would be more than 50 million people, which is 34 million more than the number of votes that Rodrigo Duterte got to win the presidential elections in 2016. 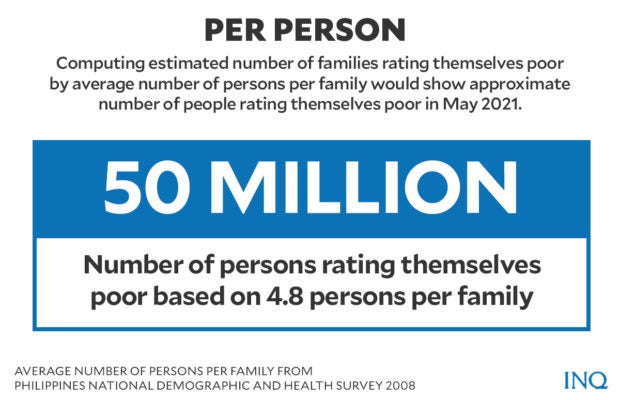 The May 2021 SWS survey results, according to Mangahas in his column, showed a worsening of self-rated poverty. Before the pandemic in 2019, results of four quarterly surveys by SWS showed an average 45 percent of all families saying they were poor. Some 31 percent said they were borderline poor and 24 percent said they were not poor. 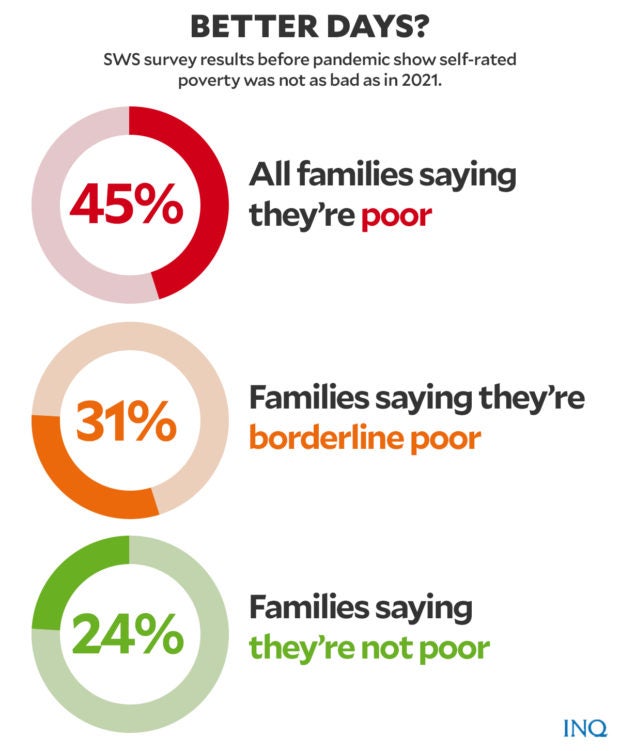 Still according to Mangahas in his Inquirer column, median self-rated poverty threshold per month, or the amount that families feel they need to not feel poor every month, is P20,000 in NCR. It’s P15,000 in the rest of Luzon, P10,000 in the Visayas and P12,000 in Mindanao. 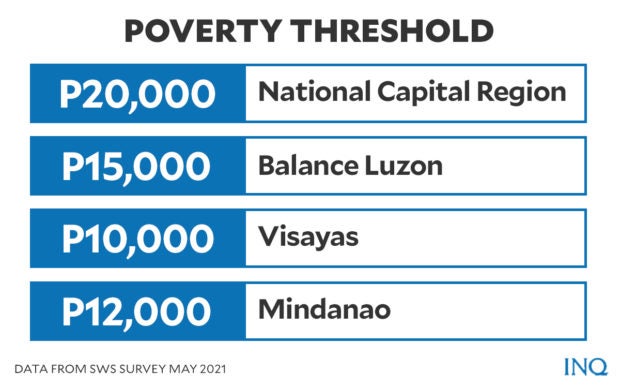 “The thresholds are reasonable, the poor have modest aspirations,” wrote Mangahas.

“It is the midpoint of what the poor say is the distance from their own poverty threshold,” wrote Mangahas. “The gaps are significant, the poor are not petty.”

As the nation awaits Duterte’s last State of the Nation Address (SONA) on Monday (July 26), it would be interesting to ask people if they felt their lives improved in Duterte’s reign but for now, numbers could suffice to show how the people fared in terms of jobs and livelihood.

There’s always a race involving only two runners — growth in labor force and growth in jobs. In most cases, the first always wins.

The population of workers, 15-years and older, entering the labor force every year continues to increase and did so again under Duterte.

The employment numbers are a gauge of how far Duterte has gone in improving people’s lives. In his first SONA, he promised to alleviate poverty.

“My administration will continue and maintain current macroeconomic policies and even do better,” Duterte said then.

“Prudent and monetary policies,” he said, “can help translate high growth into more and better job creation and poverty reduction.”

Duterte had frowned upon the underspending that marked the rule of his predecessor, the late Benigno Aquino III. For Duterte, it should be spend, spend, spend especially on his P8.4-trillion “Build, Build, Build” centerpiece infrastructure program.

Launched in 2017, Build, Build, Build would usher in, according to Duterte and his officials, a “golden age of infrastructure.”

According to the Department of Budget and Management (DBM), the Build, Build, Build program is expected to generate at least 1.1 million jobs annually that are mostly associated with but are not limited to construction and development.

Based on numbers from then-Socioeconomic Planning Secretary and National Economic and Development Authority (NEDA) chief Ernesto M. Pernia, the program created at least “600,000 plus jobs” in April 2018 — a big chunk in construction.

The Department of Finance (DOF) likewise reported in 2018 that the construction sector grew by 12.7 percent in 2016.

While the employment figures were promising, unemployment rate in the first three years of Duterte’s reign was 5.10 to 5.70 percent showing small increments of improvement that can hardly change the picture.

As defined by the government, unemployed people are those: 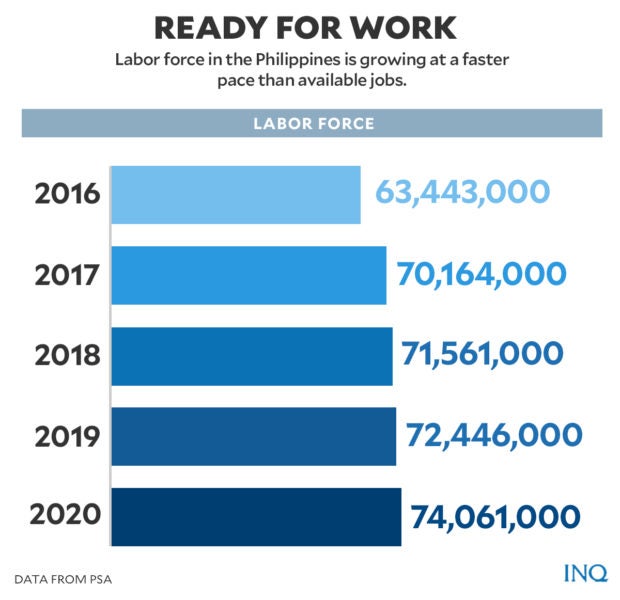 Initial results of PSA’s Annual Labor and Employment Estimates for 2016 based on the average of four Labor Force Survey (LFS) rounds—January, April, July and October—reported an annual unemployment rate of 5.5 percent or at least 2,363,000 Filipinos. In 2017, it climbed to 5.70 percent or an estimated 2,441,000 unemployed Filipinos. 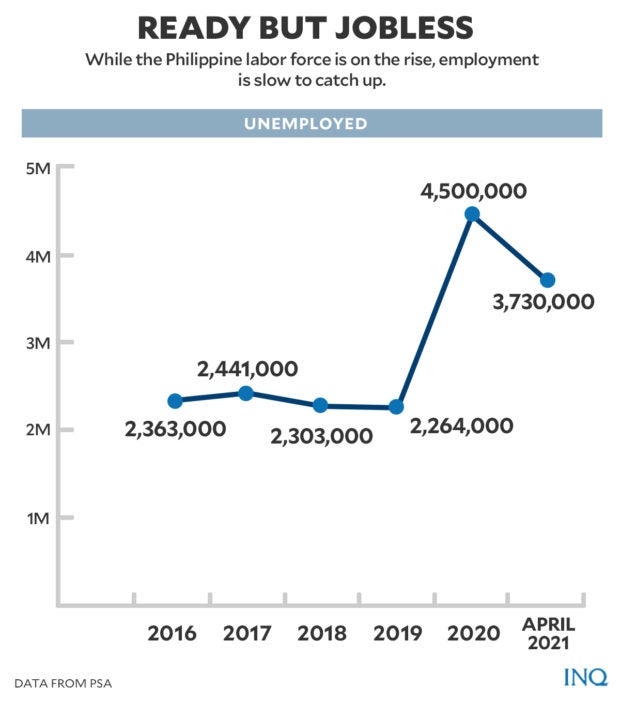 On the other hand, those who are considered underemployed or people with jobs but with short hours declined.

When the COVID-19 pandemic landed on Philippine shores in 2020, a surge in COVID cases was also marked by a surge in unemployment.

Lockdowns that kept millions at home led to business closures and pushing unemployment to a high of 17.7 percent in April 2020.

READ: Amid ECQ, ‘record-high’ unemployment rate of 17.7% posted in April

Overall, at least 4.5 million Filipinos were left jobless for the whole year of 2020, or an equivalent of 10.3 percent, the highest in 15 years.

READ:  Batch 2020: How Filipino college graduates job-hunted through the pandemic

But the Department of Labor and Employment (DOLE) took pride in the numbers. The unemployment rate of 7.1 percent, DOLE said in a statement, was “already the lowest” since the pandemic began.

“The signs are indeed encouraging,” DOLE added. “Our economy is gradually getting back on track as more people are actively participating in the labor force and are becoming employed.”

The PSA also noted that 2.18 million workers were added to the total number of employed individuals, leading to 45.33 million or 92.9 percent employment rate in March.

Labor Secretary Silvestre Bello III said last June that a total of 2,068 establishments had closed down during the pandemic.

Latest PSA data showed that the country’s unemployment rate last May was 7.7 percent.

Employment rate, said the PSA in a report, “rebounded.”

To recover from the pandemic-induced recession, Duterte signed the Corporate Recovery and Tax Incentives for Enterprises Act (CREATE) bill into law.

CREATE will cut corporate taxes across the board and rationalize tax breaks. From Southeast Asia’s highest corporate tax of 30 percent, the rate will drop to 25 percent for large corporations and to 20 percent for smaller businesses.

The Department of Trade and Industry (DTI) estimated that P200 billion new investments would come in and at least two million new jobs will be created as a result.

In addition, the government’s Build, Build, Build program is set to generate 1.6 million more jobs in 2021, according to Public Works Secretary Mark Villar.

In 2018, survey results from SWS showed that around 11.6 million Filipino families, or 50 percent consider themselves poor.

The survey also bared that at least 30 percent or 7.9 million Filipino families were “food poor.”

The percentage of families who rated themselves as poor further increased in 2019 with 54 percent or 13.1 million families—the highest under the Duterte regime.

However, from November 21 to 25, 2020, only 48 percent of Filipino families rated themselves poor.