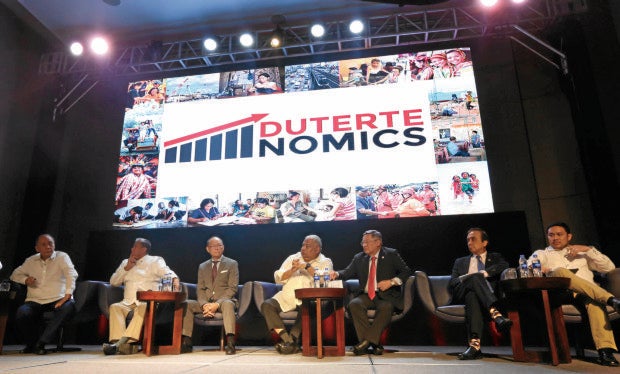 President Duterte and Japanese Prime Minister Shinzo Abe are set to sign in November an agreement that would jump-start the construction of the country’s first subway system, Transportation Secretary Arthur Tugade said on Tuesday.

At the “Dutertenomics” forum at Conrad Hotel in Manila, which showcased the priority projects of the Duterte administration to usher in what it called the country’s “golden age of infrastructure,” Tugade said the Mega Manila Subway system may be initiated as early as 2019.

Tugade said the P227-billion project, “one of the very ambitious projects of the Duterte administration,” would be funded by the government and through an official development assistance. He added that it promised to bring commuters from Quezon City to Taguig in just 31 minutes.

At the forum, Socioeconomic Planning Secretary Ernesto M. Pernia said the administration planned to roll out more than P3.6 trillion in public infrastructure projects from 2018 to 2020.

Pernia said the administration would also increase the number of “game-changing” projects that it would roll out and complete before 2022.

He said the Philippines would experience its “golden age of infrastructure” from 2017 to 2022.

Budget Secretary Benjamin E. Diokno said a total of P8.4 trillion would be spent for infrastructure during the six-year Duterte administration so that the share of infrastructure spending in the gross domestic product would rise from 5.4 percent this year to 7.4 percent in 2022.

Also on Tuesday, Malacañang launched the build.gov.ph website that contains the details of the administration’s infrastructure projects, including the cost and the status.

In his keynote speech, Finance Secretary Carlos G. Dominguez III lamented that the Philippines had been left behind in the region because of poor infrastructure.

In his visit to the country in January, Abe pledged 1 trillion yen or P424 billion in investment and development assistance to the country over the next five years.

Tugade said Mr. Duterte and Abe were scheduled to sign in November an agreement for the subway system’s construction, which would use Japan’s tunneling expertise.

He, however, did not elaborate on whether the President would fly to Tokyo for the signing of the agreement or if the Japanese premier would return to Manila.

Once completed by the second quarter of 2024, the first phase of the subway system, which will have 13 stops, is expected to cater to 350,000 passengers daily.

The subway line, previously described under the Public Private Partnership program as a Makati-Pasay-Taguig Mass Transit System Loop, was shelved during the Aquino administration due to its massive cost and questions over right of way for overhead stations in the Bonifacio Global City stretch.

Also in the pipeline for the development of the country’s rail systems is the construction of the Philippine National Railways (PNR) North Rail that would connect Tutuban in Manila with Clark in Pampanga.

Tugade said the construction of the P225-million rail was to be started by the second quarter of 2018. Once completed in 2021, the 100-kilometer PNR North Rail will cater to around 350,000 passengers daily, who can reach Clark from Tutuban in 55 minutes.

Along with the PNR North Rail, slated to start by the third quarter of 2018 is the construction of the PNR South Rail that will connect Manila with Calamba and Los Baños in Laguna, and the Bicol region, according to Tugade.

Tugade said that the first phase of the 2,000-km Mindanao Rail is expected to be completed by 2021. The P32-billion line would connect Tagum with Davao and Digos cities, which has a distance of 104 km.

The rail system can ferry 117,000 passengers daily and cuts travel time from Tagum to Digos to just an hour.

Another project of the Duterte administration is Luzon Spine Expressway that would cut travel time between La Union and Bicol to under 12 hours, according to Public Works Secretary Mark Villar.

In addition, the administration will build a Panguil Bay Bridge (Misamis Occidental to Lanao del Norte in Mindanao) and a Leyte Tide Embankment to help prevent devastating floods that hit Tacloban during Supertyphoon “Yolanda” in 2013, according to Villar.

As the Duterte administration pushed its ambitious infrastructure program to sustain the country’s economic growth, Malacañang officials said keeping peace and order was an essential part of it.

“Under the PRRD administration it is a doctrine that an economy thrives when there is peace and order,” presidential spokesperson Ernesto Abella said. —WITH A REPORT FROM LEILA B. SALAVERRIA