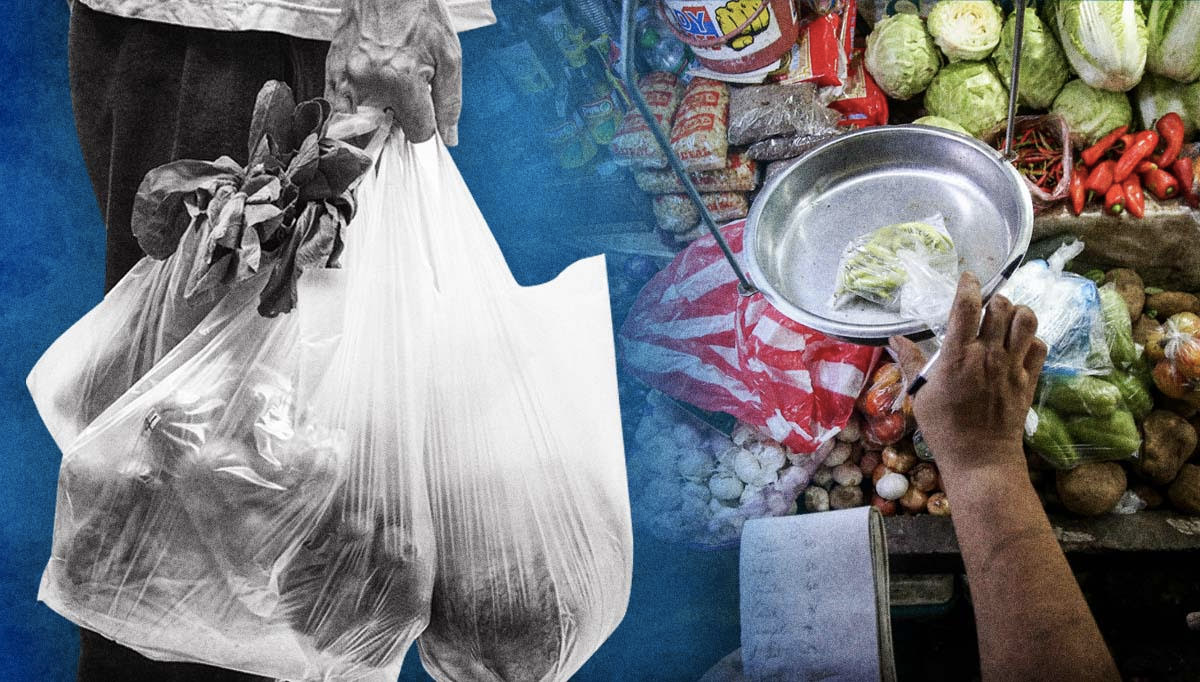 MANILA, Philippines — The term “living wage” speaks for itself—the income that a family of five in Metro Manila needs to survive from day to day.

The think tank Ibon Foundation has estimated that for a family of five in the capital to live through each day, they would need an income of at least P25,252 every month. But with a daily pay of P537—the minimum wage rate in the metropolis—how can Filipinos live decent lives?

Ibon said the living wage had been computed to be P1,004 per day in 2019. It’s P1,072 per day currently. While this was only a 6.8 percent increase, minimum wage in Metro Manila has remained stagnant since 2018.

According to the National Wages and Productivity Commission (NWPC) of the Department of Labor and Employment, minimum wage in the metropolis is P500 to P537 per day––only half of the living wage rate that Ibon said a family of five needs to live decently. 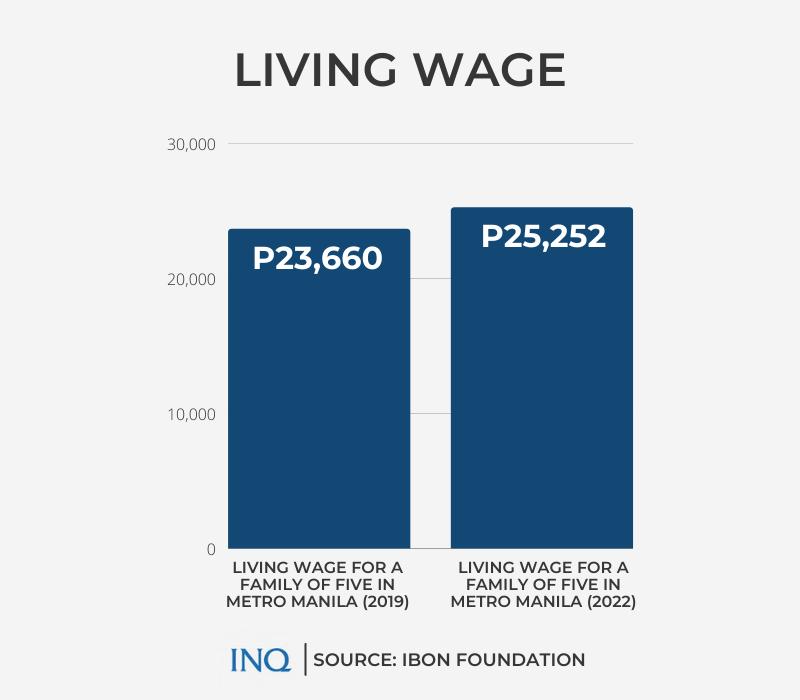 Living wage, the Cambridge English Dictionary said, is the wage level that is enough to pay for things that one needs to live. But in the case of Filipino workers, Ibon said “wages keep falling.”

Families can spare P459 for furnishings and routine household expenses, P441 for communication, P431 for health expenses, P421 for clothing and footwear, and P319 for heavy-duty furniture and equipment.

Ibon said families may also spend P305 for special family occasions, P273 for education, P181 for alcoholic beverages, P99 for recreation and culture, P381 for savings, and P282 for other expenses. 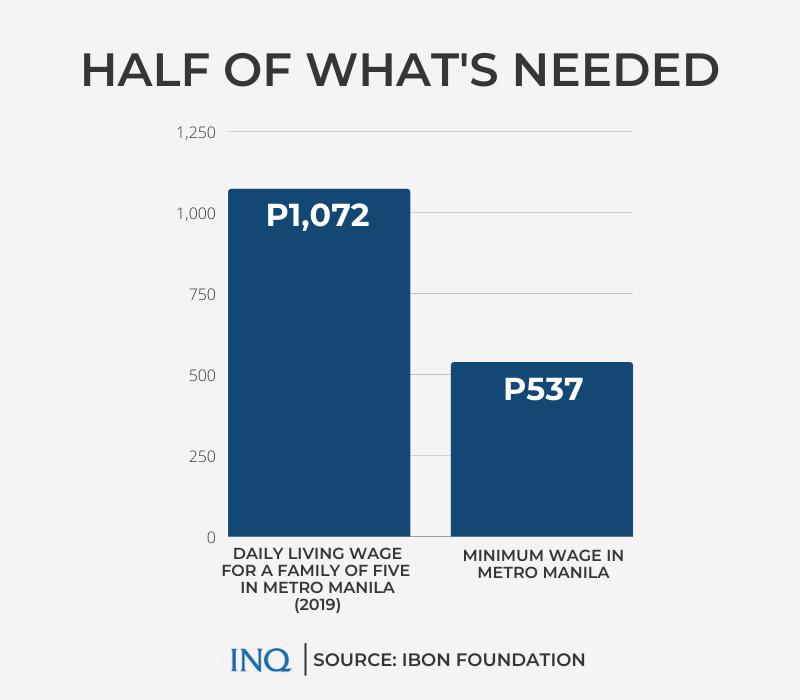 While the breakdown was based on the Philippine Statistics Authority’s (PSA) Family Income and Expenditure Survey and the February 2022 inflation rate––3 percent––the think tank said the expenses will still rise.

The PSA said on Friday (March 4) that even if the costs of oil and commodities rose last month––4.8 percent––food inflation fell to 1.1 percent. This was the reason inflation last month was still 3 percent.

However, the ING Think-Economic and Financial Analysis said that with the Russia and Ukraine war, more expensive commodities will likely filter through domestic costs.

It stressed that since food and transportation are the two largest components of the consumer price index (CPI) in the Philippines, “any sharp price wings” will be enough to push inflation past 4 percent in May.

Sonny Africa, Ibon Foundation executive director, told INQUIRER.net that the costs of basic commodities will likewise rise on top of the oil price hikes that were “already from the high inflation over most of last year.”

He said that while it’s hard to predict inflation rates, especially with how the COVID lockdowns hit, “it’s also hard not to recall what happened when the price of Philippine benchmark Dubai crude hit its all-time high of $131 in July 2008.”

Africa stressed that the price per barrel in 2008 rose to P5,618 at the prevailing P42.80 per $1 exchange rate then. Inflation soared to 10.2 percent at the time especially because oil prices stayed high for almost five to six months.

“Today, driven by speculation because there don’t yet seem to be any supply shocks, the price of Dubai crude has already risen to $107 which comes to some 5,500 pesos per barrel at present P51.47 per $1 exchange rates,” he said. 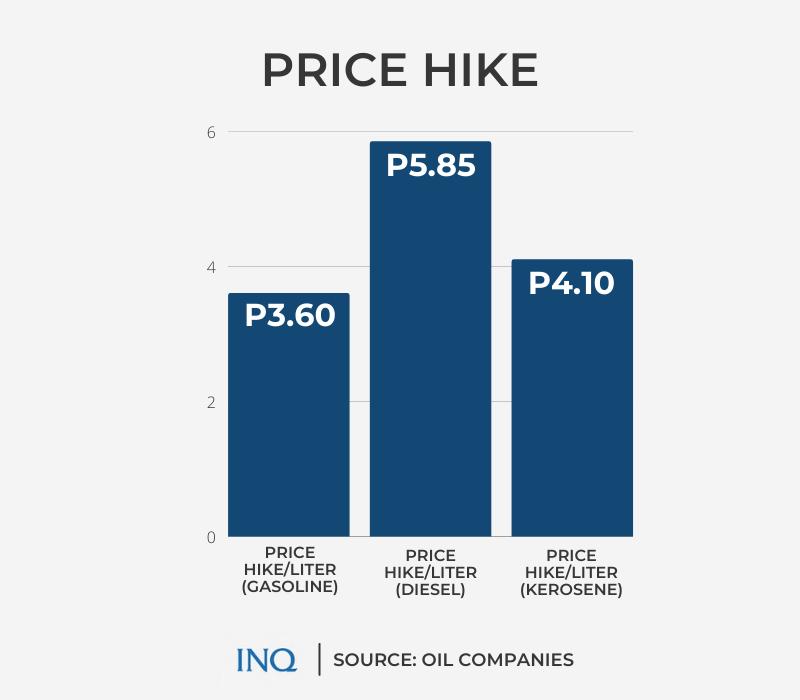 The longer the Russia and Ukraine conflict lasts, the worse its impact would be on prices, especially if the primary oil producers will not take action to ease the cost of oil, like increasing production “to calm the oil market”.

Africa said poor Filipino families that are already bearing the consequences of low incomes, lost savings, and joblessness from the lockdowns will be worst hit by rising prices.

For Africa, the official poverty threshold is too low and only covers food and non-food subsistence level of existence. This, he said, is miserable because “the low level of ambition can be used to cover up all sorts of policy sins”.

He stressed that for instance, the low poverty threshold is relatively easy to attain and can be artificially achieved with cash transfers, like the Pantawid Pamilyang Pilipino Program.

The PSA said the poverty incidence was 23.7 percent—26.14 million Filipinos who lived below the poverty threshold. This was nearly one-third of the population.

The rate of individuals whose income is not enough to meet even the “basic food needs” was 9.9 percent––10.94 million Filipinos. The average food threshold was P8,393. 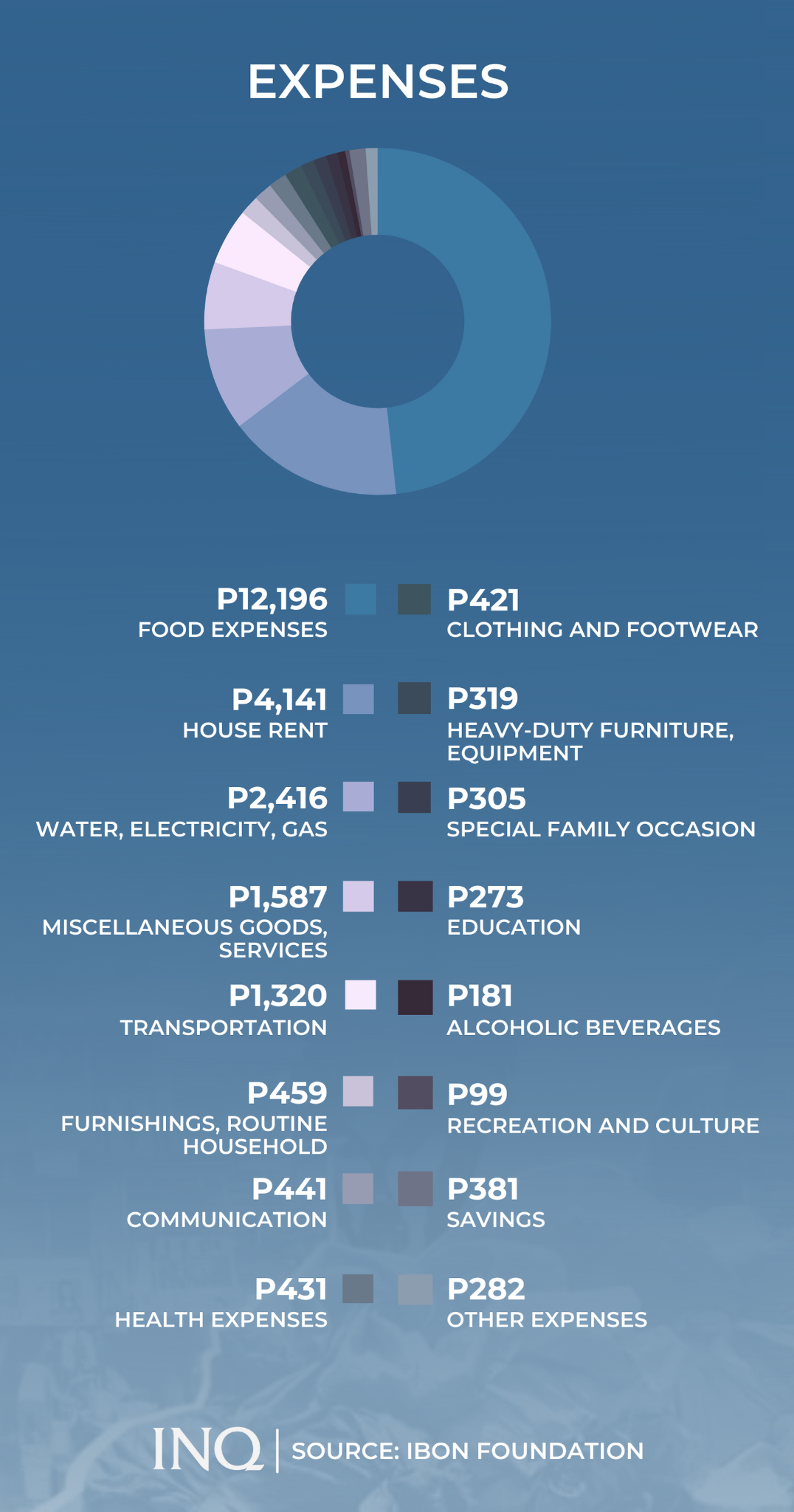 On Dec. 17, 2021, the National Economic and Development Authority (Neda) said that with a vision that reflects the collective aspiration to end extreme poverty by 2040, “we set a goal of lifting six million Filipinos out of poverty by 2022.”

It said this was achieved in 2018, stressing that this early gain in lessening poverty was driven by wise macroeconomic management and the enactment of reforms that increased real income opportunities for the people.

However, Africa explained that the official poverty threshold only covers those in deepest poverty, saying that the pretension in lowering poverty is even used to defend “free market” policies that actually keep so many poor and jobless.

To really address poverty, he said the government should set a higher threshold that will mean a more ambitious poverty target that will translate to more decisive measures to address the problem.

With this, he said official poverty statistics will no longer be a smokescreen for bad policies of the government. It will become a guide for more genuinely effective development policies.

“A government that genuinely wants to uplift the conditions of the people should not be afraid of defining poverty more accurately,” Africa told INQUIRER.net.

Africa said that the government can do so much to mitigate the effect of oil price hikes and inflation on tens of millions of poor Filipinos: “It can rush to give ₱10,000 in aid at least twice and maybe even three times.”

“This will immediately alleviate the economic distress that so many have been suffering for nearly two years. This will be spent wholly and locally, not like when the same amount is used for infrastructure projects or debt servicing.”

“Large portions of infra spending leaks abroad for imports and to pay foreign contractors. Debt servicing, meanwhile, is an outright diversion to creditors, banks and financial institutions,” he said.

He explained that domestic spending will likewise help boost business for small enterprises, especially the many informal ones in communities: “If enough is given to boost household consumption and demand, the overall multiplier effect will be much more palpable.”

“A wage hike can also have the same effect. Large firms will be able to afford this if they accept a slight cut in their profits. The government can, meanwhile, give genuinely struggling smaller enterprises wage subsidies for a few months until aid-driven household spending and the economy gains more momentum,” Africa said.

Household-based aid will be more effective in reaching 13.2 million workers in informal establishments and actually the only way to help around 18.2 million self-employed or in otherwise informal and irregular work.