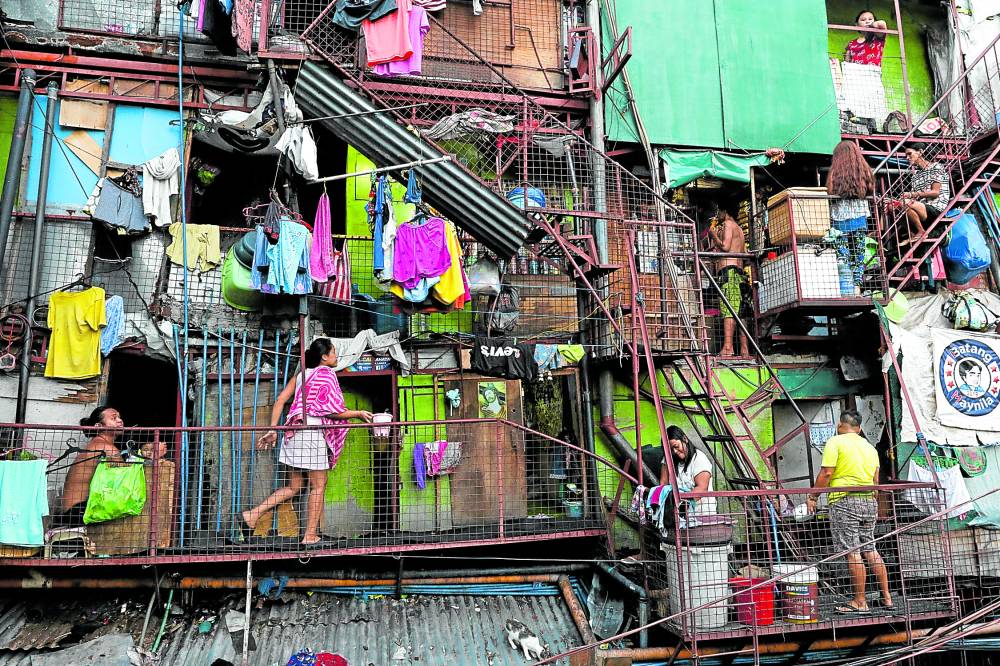 SLUM COMPLEX Residents of a small apartment building in Tondo, Manila, do their house chores outside their units. A Philippine household needs to earn more than P12,082 a month to meet its members’ basic needs. —REUTERS

The prolonged COVID-19 pandemic which shed jobs and livelihoods, made worse by rising consumer prices, jacked up the country’s poverty rate to 23.7 percent in the first half of 2021, the government reported on Friday.

National Statistician Dennis Mapa said the increase in poverty incidence at the start of the year reversed the downward trend during the preceding three rounds of the first-semester family income and expenditure survey (FIES) being conducted by the Philippine Statistics Authority (PSA) every three years.

The rise in poverty incidence in the first half of the year meant an increase in the number of poor Filipinos to 26.14 million from 22.26 million three years ago, before the COVID-19 pandemic struck.

Mapa said the latest FIES results showed that the poverty threshold—the estimated minimum monthly cost covering basic food and nonfood needs of a family—rose 14.7 percent to P12,082 per household from P10,532 in 2018.

It did not help that food items, especially of meat like pork, became more expensive this year, no thanks to the supply shortage caused by the African swine fever outbreak. As such, headline inflation jumped above the government’s target range of 2 to 4 percent for this year.

Inflation among the bottom 30-percent income households averaged 4.8 percent as of end-November, higher than the nationwide headline rate of 4.5 percent, which meant that the poor shelled out more for basic commodities.

On the other hand, Mapa said average family incomes nationwide rose by a slower 4.5 percent in 2021 compared to 2018 levels.

While the PSA was unable to measure poverty last year—when about three-fourths of the economy stopped at the height of the stringent COVID-19 lockdowns in the region, Mapa said some vulnerable sectors likely experienced spillover effects early this year from the worst postwar recession in 2020.

Mapa pointed to much lower incomes in the first half of 2021 compared to 2018 levels among entrepreneurs, those working in the transportation, storage and services sectors, as well as households reliant on cash remittances from family members who were working abroad. Thousands of overseas Filipino workers (OFWs) returned home due to the global recession.

“If we look at our labor force surveys, we will see that these are the sectors which have high unemployment,” Mapa noted.

As such, poverty among households also rose to 18 percent, or 4.74 million families in the first half of this year, from 16.2 percent, or 4.04 million three years ago.

Among the Philippines’ regions, the National Capital Region—the country’s commercial and business center—continued to have the lowest poverty incidence, although it rose to 7.8 percent in the first half of 2021 from 6.6 percent in 2018.

While the newly formed Bangsamoro Autonomous Region in Muslim Mindanao (BARMM) had the highest poverty rate in the first half of this year and of 2018, although the rate declined to 45.8 percent from 63.2 percent. Socioeconomic Planning Secretary Karl Kendrick Chua attributed this decline in BARMM’s poverty rate to the peace and autonomy that were finally achieved in the former war-torn region.

Chua said that since incomes historically increase in the second half of the year, the government was sticking to its target to end the Duterte administration in 2022 with a lower poverty rate of 15.5 to 17.5 percent, especially with more economic sectors reopening and rebounding from last year’s pandemic-induced recession.

In 2018, the poverty rate drastically fell from 21.1 percent in the first half to a record-low 16.7 percent by the end of that year.

This year, “between the first half and the second half, there was a big difference in economic opening as we’ve seen in the progress of the GDP (gross domestic product) and labor force numbers … We are expecting [a similar dip in the poverty rate across this year] to happen,” Chua said.