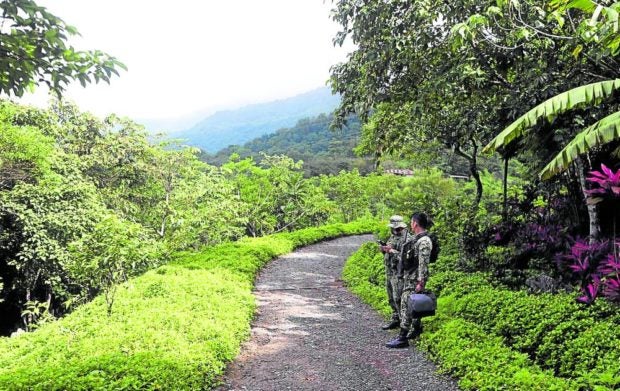 MANILA, Philipppines — The Department of Environment and Natural Resources (DENR) on Saturday said it will review all agreements on conservation areas nationwide, including the agency’s Memorandum of Agreement (MOA) on the protection of the Masungi Georeserve.

Environment Undersecretary Jonas Leones said his agency will also look into the finances of the Masungi Georeserve Foundation, which is looking after the site.

But the lawyer clarified as well that the review was not meant to single out the foundation, which questioned its timing.

Leones is the DENR official tackling this matter as Environment Secretary Maria Antonia Yulo Loyzaga is out of the country.

Last week she attended the four-day Asia-Pacific Ministerial Conference on Disaster Risk Reduction in Brisbane, Australia, according to the DENR’s website.

After the foundation reported last week the presence of armed men in the site, police confiscated their firearms but stopped short of arresting them.

Leones, who joined that visit together with other DENR officials, said his agency will also review all agreements on protected sites in connection with the Expanded National Integrated Protected Areas System (Nipas) Act of 2018 (Republic Act No. 11038).

The foundation cited that law as well as a number of proclamations by the father and namesake of President Marcos as the basis for Masungi’s designation as a conservation site titled to the Republic of the Philippines.

As it reviews the foundation’s 2017 agreement with then Environment Secretary Gina Lopez, the DENR will also look into the foundation’s “income” from “fees” collected from visits to the site and from the “financial support” of international groups, Leones said.

“We need to take into account those,” he said, adding that the funding should be taxed “so our government can use [the taxes] for other public services.”

“We are doing this not because we want to suppress or single out [the foundation]. This is for us to improve [the agreement] so they can better implement their duties,” he said.

But according to the agreement which Leones himself provided, even as the DENR is the designated administrator of the site, it is the foundation that “shall plan, finance, implement and manage” that “project area”—Masungi’s original area of 430 hectares plus the surrounding 2,700 ha of forestland.

The agreement provides further that the “project income shall be plowed back for the sustainable conservation of the project area”—adding that “There shall be no compensation for any of the work to be performed by [the foundation].”

“The project area shall be constituted as a perpetual land trust for conservation,” the agreement states.

Foundation trustee Billie Dumaliang said, in response to Leones’ remarks, that if transparency is the supposed concern prompting the planned inquiry, it is already addressed in the agreement itself.

“Transparency is already in the current MOA, but they [the DENR] never convened the oversight committee or assigned a dedicated project manager as provided in the terms,” said Dumaliang, a witness signatory.

“That’s what we have been asking them to do so that we can implement [the agreement] faithfully and resolve any concerns jointly,” she added.

She said the DENR should instead review and cancel what she called the mineral production sharing agreements (MPSAs) which already encroach on more than 1,000 ha of Masungi’s protected areas.

The agreement, in that regard, stated that the “DENR shall be responsible for the immediate cancellation of tenural instruments with violations or [which were] fraudulently issued, [in] coordination with the Office of the Solicitor General…[and] ejectment of illegal occupants at the project site.”

“These MPSAs are patently against the law and public welfare,” Dumaliang said. “We believe the quarrying interest here is one of the key reasons some politicians want our MOA canceled and modified. Isn’t it the height of irony?”