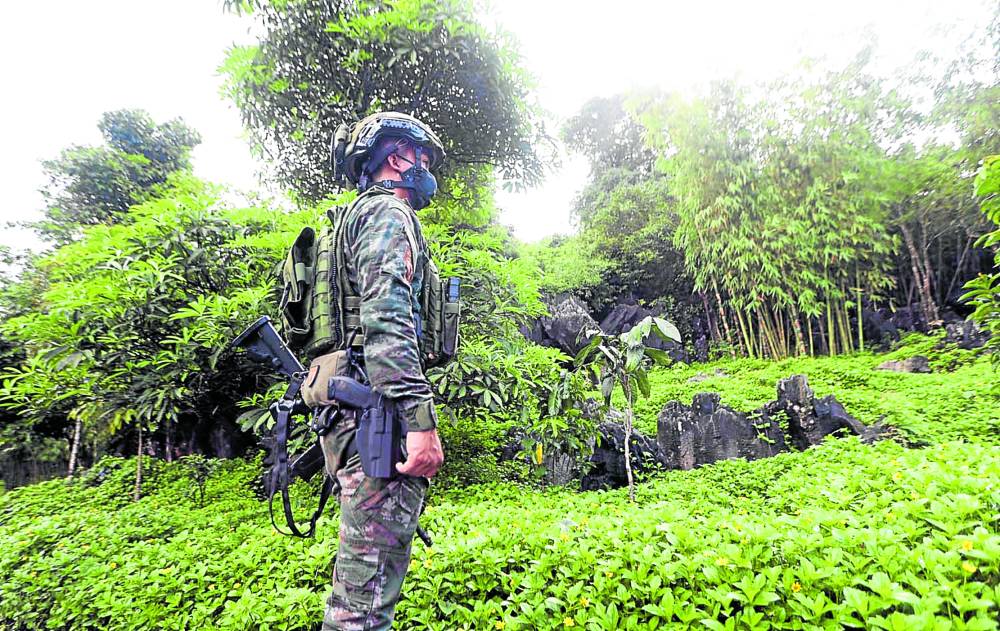 MANILA, Philippines — Interior Secretary Benhur Abalos and the Philippine National Police were hailed as “champions” by an administrator of the Masungi Georeserve after they inspected the site in Rizal province on Friday.

As expected, there were no armed men in sight in Lot 10, the roadside area they reportedly occupied last week along Kilometer 48 of the Marikina-Infanta Highway.

The Masungi Georeserve Foundation (MGF) had posted photos on social media showing at least eight parked vehicles supposedly belonging to those men. According to MGF, they were personnel from Sinagtala Security Agency Services who had set up camp with the intention of taking over huge tracts of land.

Abalos on Friday said he found no such encampment. But according to Lt. Col. Rodolfo Guillermo Santiago, the Tanay municipal police chief, 14 men were earlier seen in the area but they left “voluntarily” before Abalos arrived.

According to Abalos and Santiago, the vehicles in the photos posted by the foundation were actually in a queue at a car repair shop along the highway—contrary to MGF’s suspicions. Abalos, who was joined in the inspection by PNP Chief Gen. Rodolfo Azurin Jr. and officials of the Department of Environment and Natural Resources (DENR) led by Environment Undersecretary Jonas Leones, ordered the police to keep all areas of Masungi free of illegal occupants.

“Security or armed forces are not allowed to enter the area without permit from the PNP, especially in a location where there is a contest on the claim of land,” he stressed.

Any security agency illegally deploying men in the area would lose its license from the PNP, he warned.

“Today, our forests won, like a long drought welcoming its first drops of rain,” MGF trustee Billie Dumaliang said in a statement.

Billie said the foundation was looking forward to working with Abalos “to bolster our efforts in reforesting and defending our conservation sites.”

But her father, Ben Dumaliang, foundation president, said the trespassers could still return because they were backed by police officials, both active and retired.

“How do we expect the common people to follow the law when the supposed enforcers of the law were the first ones to break it instead of setting a good example,” he said during the meeting with Abalos and other officials.

Azurin assured him by saying: “We will file cases against them, but we need the cooperation of the complainants so the cases would prosper. I assure you that we do not care if the active police officers [get] dismissed because of their involvement.”

Hoping that Friday’s inspection was “just the beginning,’’ Billie said “we know that we will continue to sustain various forms of attacks after this, so we seek your continued support to help us through.”

“How we protect Masungi will show how serious we are in protecting our forests and addressing the climate crisis and enforcing our existing laws,” she added, noting that the watersheds around the forest serve as water source for surrounding communities.

The 430-hectare conservation site and wildlife sanctuary—almost the size of the University of the Philippines Diliman campus—hosts endangered endemic species like the Philippine hawk-eagle, the indigo-banded kingfisher and the North Luzon giant cloud rat.

Masungi is further surrounded by 2,700 ha of forest, which MGF is tasked with protecting under a 2017 agreement with the DENR, when it was headed by Gina Lopez.

“Masungi and its challenges are a microcosm of the situation of forests across the country and the solutions that are exercised here will be a good model for others,” Billie said. “Let us continue to push back and speak truth to power not only in Masungi but in other threatened sanctuaries in the Philippines.” —WITH A REPORT FROM INQUIRER RESEARCH