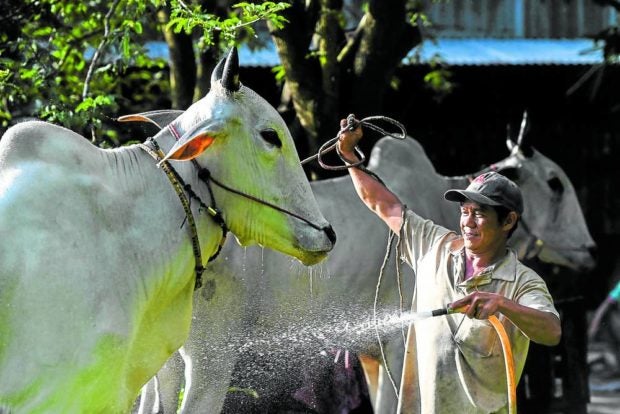 ‘IT’S FUN’ | This photo taken Friday shows a man washing an ox at oxen breeder Nguyen Van Liet’s home in Vietnam’s An Giang province. The bovines and their owners gathered for the annual Bay Nui ox race as part of the Sene Dolta festival. AFP

AN GIANG — Their stomachs full of eggs, beer, and coconut water, Nguyen Van Liet’s prized white oxen streak ahead of their rivals to the cheer of tens of thousands of spectators in Vietnam’s Mekong Delta.

The bovines and their owners gathered on a hot morning in a muddy field for the annual Bay Nui ox race — a celebrated ritual of Vietnam’s Khmer minority, ethnic Cambodians living mostly in the country’s south.

Out of action for two years because of the COVID-19 pandemic, many of the animals—racing in pairs—appeared a little rusty, running off the tracks to the disappointment of the vast crowd.

Liet’s beloved Oxen Couple No. 3, with their big dark eyes, long legs and curvy horns, looked as gentle as any plowing the rice fields of southern Vietnam.

But their sweet appearance belied their strength on the field.

“Of the four tournaments they have entered, they have won three,” Liet proudly told Agence France-Presse (AFP) before the race.

The competition—this year fought among 56 pairs of oxen—is held in An Giang province as part of the Sene Dolta festival, where the Khmer community remember their ancestors and hold a clutch of sports and art activities.

It’s believed the race was once hosted by monks as an expression of gratitude to farmers who helped them plow their soil ahead of the new rice crop.

In 2013, at a time when the average monthly income in rural areas was just $60, Liet spent around $700 on his young ox pair, determined to turn them into professional racers.

“As I had already raised oxen for plowing, I could tell which ones were good and which were not,” Liet said, explaining that he learned from his grandfather and father, who raised oxen for years to work the family’s rice fields.

“A race ox must be tall, fit and flexible,” he said.

With machinery now largely doing the ox’s daily work in the Mekong Delta, many can focus on their training for months or even years before the race.

They must be the perfect size—not too big and not too small—to reach their maximum speed.

To help them along, their standard fare of grass is switched out for eggs, coconut juice and beer around a month before the big day.

On the field, it’s up to the drivers to get the best out of an ox.

“The oxen can distinguish between a strong and a gentle driver. A driver cannot be successful if he is more gentle than the oxen,” said driver Le Minh Vuong.

The winner this year earns a Honda motorbike and a cash prize of $890 dollars — a modest amount given the nearly $6,000 price tag for a pair of oxen and the $900 annual cost for feeding.For driver Chau Duonl, the prize doesn’t matter. “It’s not about money, it’s fun.”