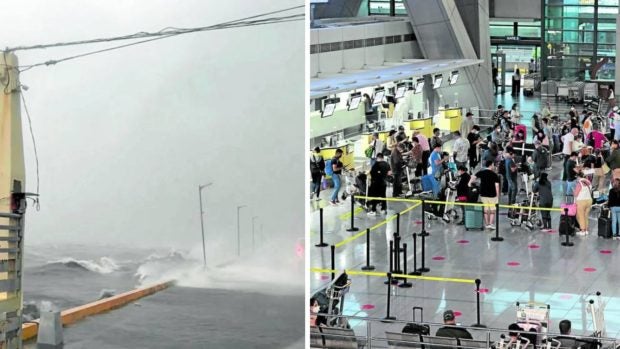 BARRELING THROUGH | Strong waves crash on a road in Polillo Island, Quezon province, where Karding (international name: Noru) made landfall on Sunday afternoon. At Ninoy Aquino International Airport-Terminal 3, passengers gather at a counter on being notified that their flights had been canceled because of the storm. (Photo by REUTERS and GRIG C. MONTEGRANDE)

MANILA, Philippines — Super Typhoon Karding (international name: Noru) barreled through the heavily populated main island of Luzon on Sunday, stranding thousands of people, canceling dozens of international and domestic flights, and putting more than a million hectares of farmlands planted to rice and corn at risk.

Classes in all levels and work in many government offices in the National Capital Region (NCR) and many provinces of Luzon have been suspended on Monday due to the storm, which the state weather bureau Philippine Atmospheric, Geophysical and Astronomical Services Administration (Pagasa) said was expected to make landfall in the northern part of Quezon province by Sunday afternoon and track westward.

According to the 8 p.m. bulletin of Pagasa, the typhoon made landfall in the municipality of Burdeos in Polillo Island, at 5:30 p.m., with maximum sustained winds of 185 kilometers per hour (kph) and gusts up to 255 kph.

It warned that there would be “heavy to intense with at times torrential rains over Metro Manila, Zambales, Bataan, Tarlac, Pampanga, Nueva Ecija, Bulacan, Aurora, Rizal, and the northern portion of Quezon.

“Under these conditions, widespread flooding and rain-induced landslides are expected, especially in areas that are highly or very highly susceptible to these hazards,” according to Pagasa.

Following Karding’s landfall, it will traverse Central Luzon, then exit to the West Philippine Sea through the coastal waters of Zambales or Pangasinan by Monday.

Malacañang on Sunday said President Ferdinand Marcos Jr. had approved a letter-recommendation by the National Disaster Risk Reduction and Management Council (NDRRMC) for the suspension of work and classes due to Karding and issued a memorandum to that effect later that day.

“I have received and approved the recommendation of NDRRMC to suspend classes and work as specified in their letter. The Palace will issue a memorandum circular stating the same before the end of the day,” Marcos said in a separate statement on his Facebook page.

Press Secretary Trixie Cruz-Angeles said the president was coordinating with Cabinet members directly involved in the preparations for the supertyphoon, among them, Defense Secretary Jose Faustino Jr., who chairs the NDRRMC, Secretary Benhur Abalos of the Department of the Interior and Local Government for possible evacuations, especially of people in low-lying areas that are prone to flooding, Social Welfare Secretary Erwin Tulfo and Secretary Renato Solidum of the Department of Science and Technology.

The Department of Health also decided to suspend Monday’s launch of “PinasLakas Bakunahang Bayan,” a weeklong COVID-19 special vaccination drive, in Luzon due to Karding.

As of Sunday afternoon, more than 2,500 people were reported stranded in various parts of Luzon while about 300 others were forced to evacuate their homes as Karding barreled toward the country.

The Philippine Coast Guard (PCG) monitored 2,519 passengers, drivers and cargo helpers stuck in the southern Luzon and Bicol regions, along with 39 rolling cargoes, 18 vessels, and 15 motorbancas stranded in ports.

“We have advised shipping companies to have their ships proceed to sheltering areas,” PCG spokesperson Commodore Armando Balilo said.

The NDRRMC reported 97 families or 336 persons preemptively evacuated in Cagayan Valley and Central Luzon as of Sunday afternoon.

The Armed Forces of the Philippines, meanwhile, said it has alerted all its units in Luzon for humanitarian assistance and disaster response operations in areas expected to be affected by the super typhoon.

Trucks and personnel were deployed to assist in the mandatory evacuation of residents in vulnerable areas, while air and naval assets were also placed on standby for aerial assessment and other operations as soon as the weather clears.

Local disaster management units and local government units (LGUs) in the capital region and northern provinces were put on high alert as they prepared for Karding’s impact.

“Privacy tents” and sleeping kits were set up in Kalayaan Elementary School for evacuees in Caloocan City.

The Department of Agriculture (DA) said more than half of standing or planted rice and corn crops might be affected by Karding.

“Based on the combined data of all regions in Luzon, the area of standing crops that may be affected by Karding totals to 1,469,037 hectares for rice and 281,322 hectares for corn,” the DA said in a bulletin issued on Sunday noon.

The DA said it was in coordination with LGUs and is continually issuing advisories to relevant government bodies, as well as to farm leaders and communities.

The department also said it had activated its regional disaster risk reduction and management operation centers and is monitoring actual field situations for possible damage and losses that may be incurred in crops, livestock, and fisheries.

The Department of Transportation also implemented a shortened train schedule for the Metro Rail Transit Line 3 (MRT 3) on Sunday due to the inclement weather situation in Metro Manila.

The Philippine National Railways likewise cut short the schedules of train trips going to and from Metro Manila, Lucena and San Pablo.

Pagasa expects at least 20 typhoons to enter the country every year.