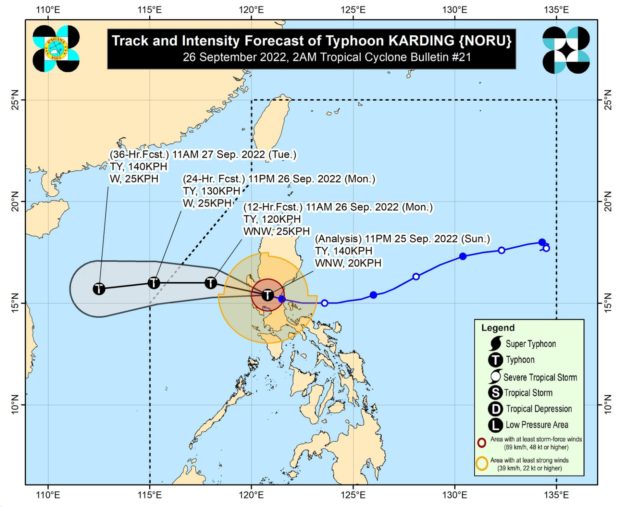 MANILA, Philippines — Typhoon Karding (internationally known as Noru) continued to weaken as it headed towards the West Philippine Sea Sunday night, according to the Philippine Atmospheric, Geophysical and Astronomical Services Administration (Pagasa).

It’s expected to exit the Philippine Area of Responsibility on Monday night.

Karding is now in the vicinity of Mayantoc, Tarlac, with maximum sustained winds of 140 kilometers per hour (kph) and gustiness of up to 230 kph.

“Afterwards, the typhoon will continue tracking generally westward over the West Philippine Sea towards Vietnam for the remainder of the forecast period. On the track forecast, it will exit the Philippine Area of Responsibility tonight,” Pagasa said in its advisory.

“Karding is forecast to continue weakening during its traverse of Luzon although it is highly likely that this tropical cyclone will remain a typhoon while crossing the landmass. Re-intensification is forecast to occur once the typhoon is over the West Philippine Sea,” the bureau added.

Here is the full list of signals due to Karding.