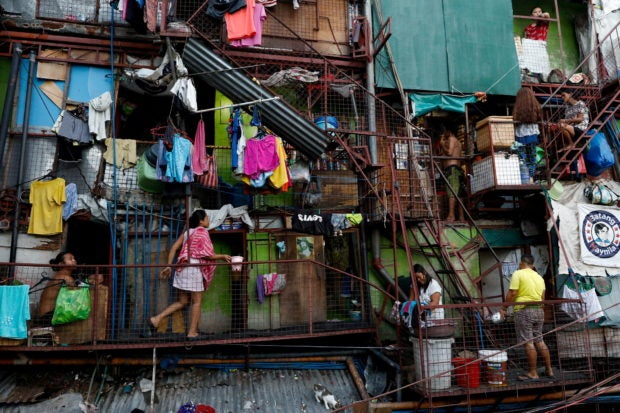 FILE PHOTO: Residents of a small apartment building do house chores outside their units, amid the lockdown to contain the coronavirus disease (COVID-19), in a slum area in Tondo, Manila, Philippines, May 4, 2020. REUTERS

MANILA, Philippines — Poorer Filipinos were worst hit by harder times wrought by the prolonged COVID-19 pandemic, both in terms of livelihood and access to quality education among schoolchildren, Asian Development Bank (ADB) economists said on Wednesday.

The ADB’s Key Indicators for Asia and the Pacific 2022 report showed that between 2018 and 2021, household consumption per capita in the Philippines dropped by 13.6 percent, the highest among Asia-Pacific’s more populous countries which included Armenia, Georgia, Indonesia, Kyrgyz Republic and Thailand.

Its estimates showed that during the four-year period, consumption among the poorest, bottom 10-percent income households in the Philippines slid 21.1 percent, the biggest decline among the six countries being monitored. In comparison, the top 10-percent income households in the country also reduced their consumption in the same period, although by a smaller 14.8 percent.

In a webinar about the report, Department of Social Welfare and Development Director Rhodora Alday noted that the majority of Filipinos hardest hit by the pandemic-induced health and socioeconomic crises belonged to the informal sector.

“They have no job security, no access to unemployment insurance. That contributed to the higher number of Filipinos who became poor during the pandemic,” Alday said.

Alday said it did not help that there was meager assistance to health-care and economic front-liners at the onset of the pandemic, particularly “very limited” free COVID-19 testing, as well as access to mobility and transportation services.

According to her, “it could have helped us in many ways” had there been more support amid the pandemic then, adding that “the support services to our workers, if it was available then, it could have been much easier, and we could have lessened the impact.”

ADB chief economist Albert Park also noted during the webinar that in developing countries like the Philippines, the poorest schoolchildren who had no access to the internet were the ones who experienced the biggest learning losses during the pandemic, when schools shifted to online classes.

But Park said that even online learning was not as effective as in-person classes as he welcomed the country’s gradual resumption of in-person schooling to reduce the learning inequality gap wrought by the pandemic.

At the same time, he urged the Philippines to undertake an “aggressive” effort to catch up with schoolkids’ education, including additional instruction time and more support for teachers.

In a report in July, the ADB said that “students in developing Asia [were] estimated to have lost what they would typically learn in nine-tenths of a school year.”

“A recent review of studies worldwide found that on average, students lost half a year’s worth of learning,” it said, citing a recent World Bank report.

“Learning losses due to school closures have been substantial in Asia and the Pacific. Efforts are urgently needed to recover those losses to avoid negative long-term impacts on student learning progression, well-being, future earnings and economywide productivity. Young people’s economic prospects are in jeopardy at this critical juncture and students will not catch up by simply returning classrooms under the prepandemic status quo,” it added.

COVID test costs: Windfall for the rich, plague for the poor