COVID test costs: Windfall for the rich, plague for the poor 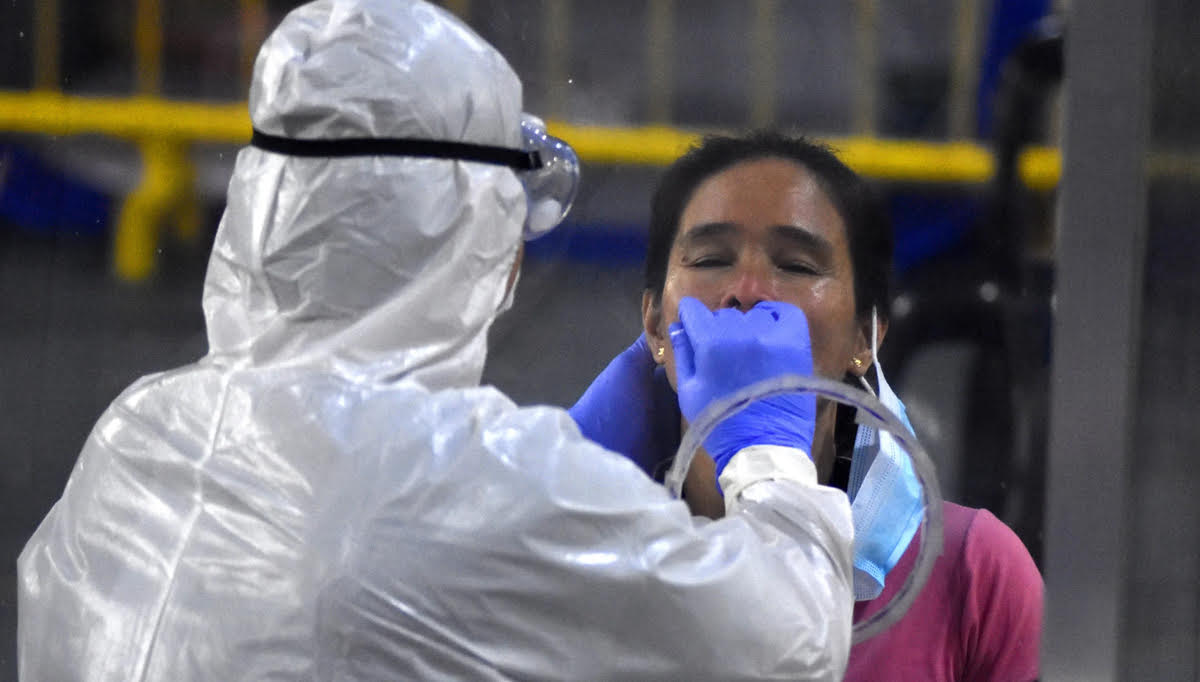 A Filipino woman gets tested for coronavirus. FILE PHOTO

MANILA, Philippines—One of the surest ways for businesses to rake in profits is to have a captive market but as the Philippines and the rest of the world grapple with the COVID-19 pandemic, a huge portion of this captive market has become those who can ill afford to spend, particularly on coronavirus testing.

While testing expenses further drain the finances of those who can barely make ends meet, these have added billions more to the already wealthy investors in testing technologies that opened the doors for more wealth regardless if this comes at the expense of the poor.

Test results are required for stranded individuals to cross borders to reach home, jobless workers to get employment, travelers to board flights, furloughed employees to return to their work. Nearly everyone has to take the tests, which means nearly everyone has to pay.

But many, like security guard Rolin Alonsabe, could barely afford the costs of the tests.

He has since joined an online group that was created to help people find the lowest cost for coronavirus tests in Metro Manila. He knew how draining the additional expense was as he had to pay for the tests when he returned to his province. 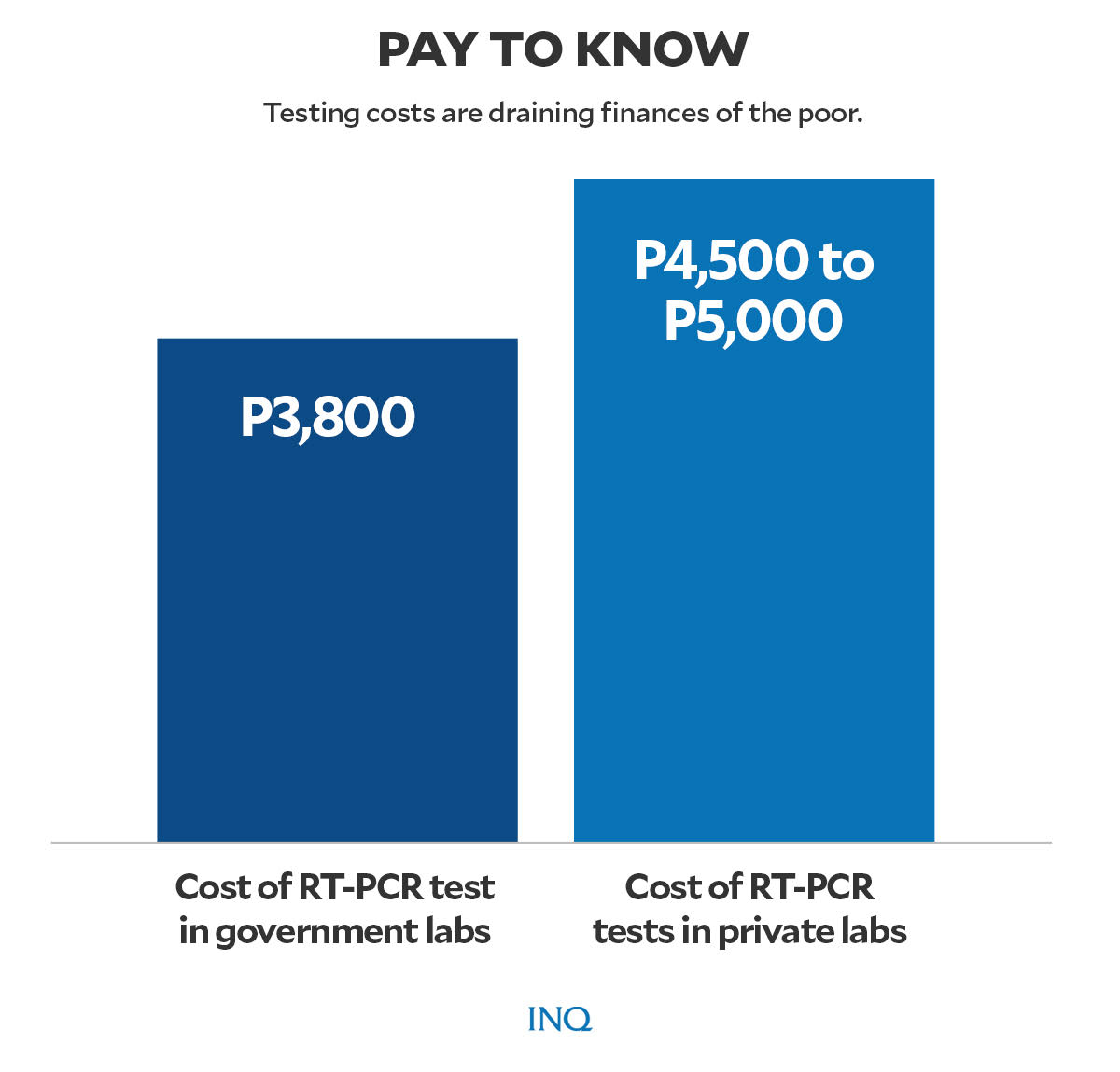 Alonsabe took what was considered to be the “gold standard” in testing technology—reverse transcription polymerase chain reaction or RT-PCR—which was worth P3,800 in public labs and P4,500 to P5,000 in private labs.

But while Alonsabe and millions of other poor Filipinos dip deep into their pockets to pay for the tests, at least 40 people who headed companies producing testing kits are now on Forbes’ list of 2021 billionaires.

The US business magazine said the new billionaires were engaged in the development of vaccines, coronavirus tests, personal protective equipment (PPE), antibody treatments, and software that help governments in pandemic response.

The list showed that seven of the 40 individuals are from companies directly involved in coronavirus tests: 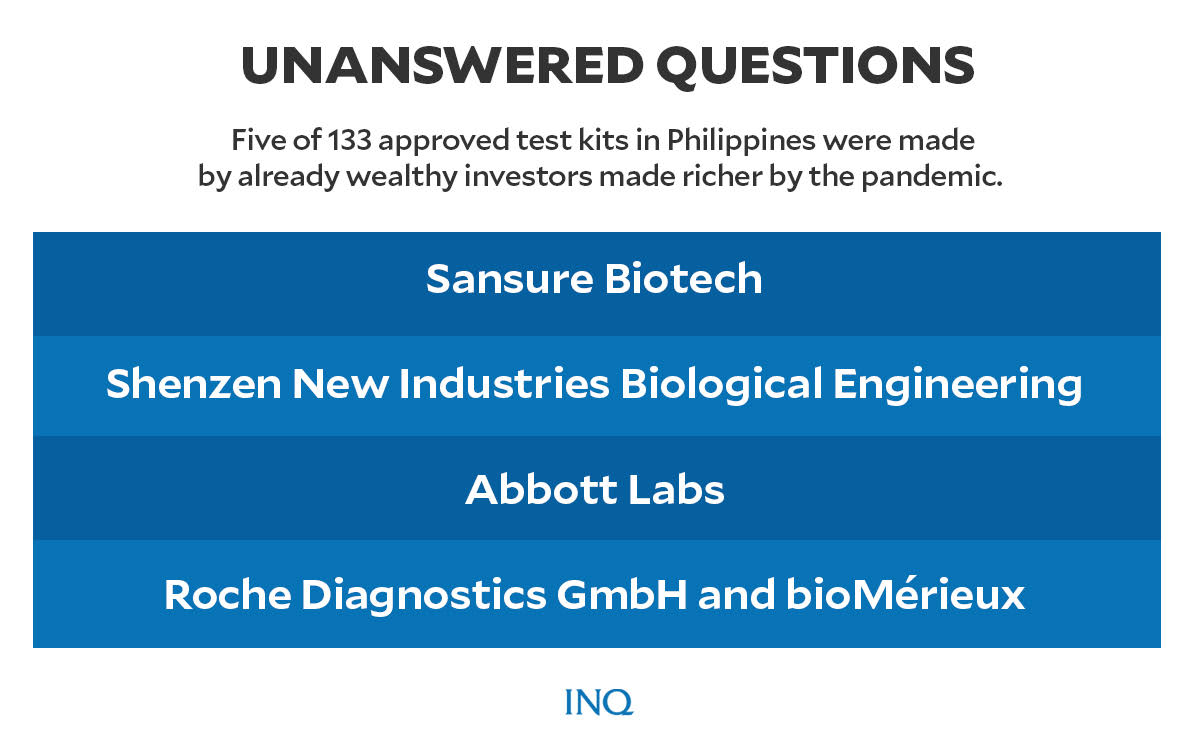 The Forbes report said these people who either head or had invested in the companies are now some of the world’s newest billionaires:

Last March 26, the Department of Health (DOH) and the Food and Drugs Administration (FDA) said the Philippines has 133 brands of testing kits approved for commercial use in 279 testing labs nationwide. 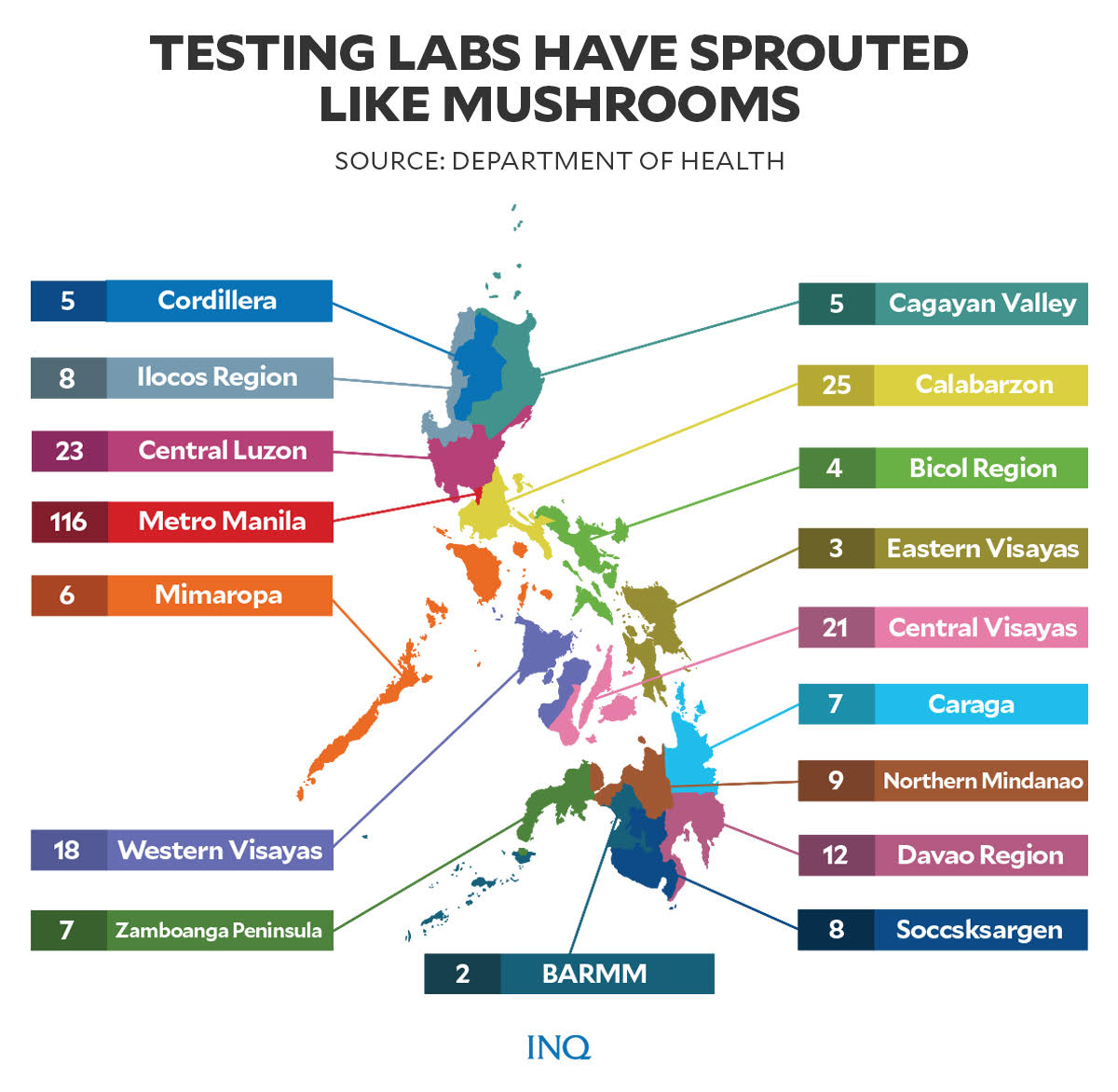 The DOH said there are 116 licensed laboratories in Metro Manila, eight in Ilocos Region, five in Cagayan Valley, 23 in Central Luzon, 25 in Calabarzon, six in Mimaropa, four in Bicol Region, 18 in Western Visayas, 21 in Central Visayas, and three in Eastern Visayas.

There are seven licensed labs in Zamboanga Peninsula, nine in Northern Mindanao, 12 in Davao Region, eight in Soccsksargen, seven in Caraga Region, five in the Cordillera Administrative Region, and two in the Bangsamoro Autonomous Region in Muslim Mindanao.

According to data from the DOH and the FDA, five of the 133 approved testing brands in the Philippines are manufactured by billionaires from Sansure Biotech, Shenzhen New Industries Biological Engineering, Abbott Labs, Roche Diagnostics GmbH and bioMérieux.

Roche’s Maja Oeri and bioMérieux’s Alain Mérieux were also on Forbes’ list—“Healthcare Billionaires that have Gotten Richer”— with $3.2 billion and $7.6 billion. 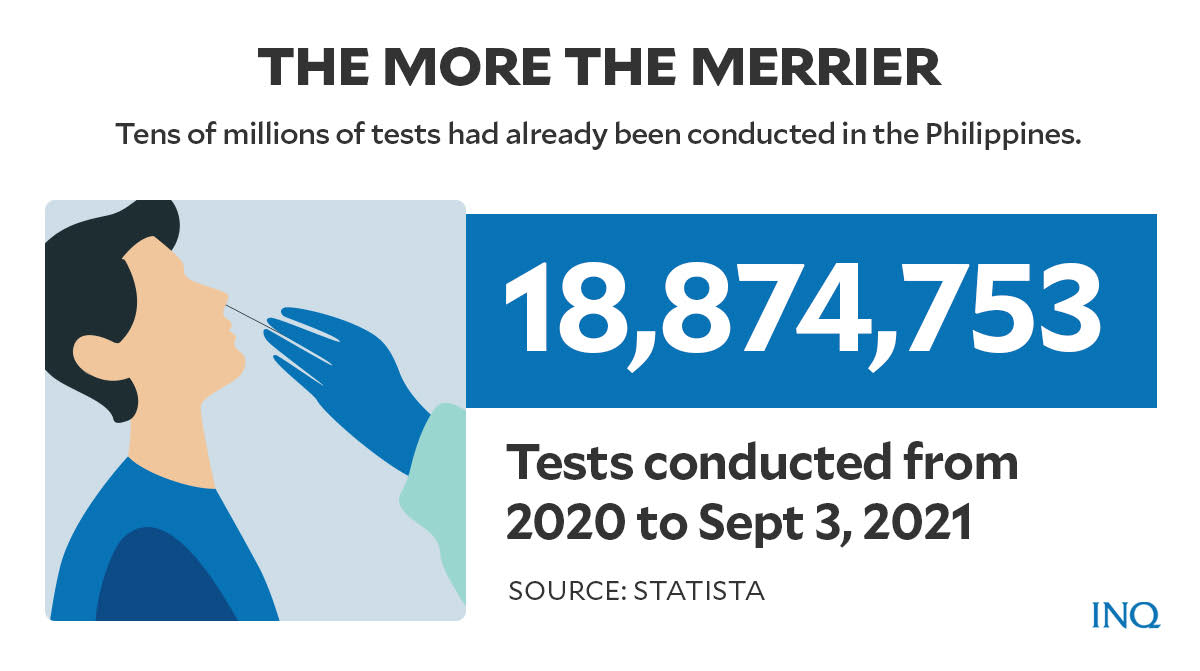 Data company Statista said that as of Sept. 3, 2021, 18,874,753 tests were already performed in the Philippines since the beginning of the COVID-19 health crisis last year. Multiplied by the lowest cost of the test—P3,800—the amount spent would have already reached at least P70 billion.

In January, non-governmental organization Oxfam said the COVID-19 health catastrophe was worsening inequality “with the richest quickly getting richer while it will likely take years for the world’s poorest to recover.”

“The 1,000 richest people on the planet recouped their COVID-19 losses within just nine months, but it could take more than a decade for the world’s poorest to recover,” the group said.

“The coronavirus pandemic has the potential to lead to an increase in inequality in almost every country at once, the first time this has happened since records began,” it added.

Oxfam said the pandemic has exposed “our collective frailty and the inability of our deeply unequal economy to work for all.”

“It has exposed, fed off and increased existing inequalities of wealth, gender and race. Over two million people have died, and hundreds of millions of people are being forced into poverty while many of the richest—individuals and corporations—are thriving,” it said.

Forbes said that when the World Health Organization declared the existence of a crisis on March 11, 2020, “markets collapsed and economies around the world plunged into recession.”

However, a year later, “things couldn’t be more different” because 493 individuals got richer, “propelled by a red-hot stock market and unprecedented economic stimulus.”

Judy Taguiwalo, CURE COVID spokesperson and former social welfare secretary, said it is “not surprising” that companies in the US, Europe and China are “amassing more wealth in the midst of the pandemic.”

She said that at the expense of poor nations and their people, the global demand for vaccines, tests, PPE sets, and the protection provided to these companies by the World Trade Organization’s intellectual property rights regimen “have guaranteed super profits for these companies.”

“Prioritizing profits over the people’s right to health is deplorable,” she said.

She said that CURE COVID supports the demand for the waiver of intellectual property rights in vaccines, medicines and equipment. She added, however, that the Philippines should have its own industries to produce vaccines and other tools needed to fight the ongoing and future pandemics.