PH poverty: You’re not poor if you spend more than P18.62 per meal | Inquirer News 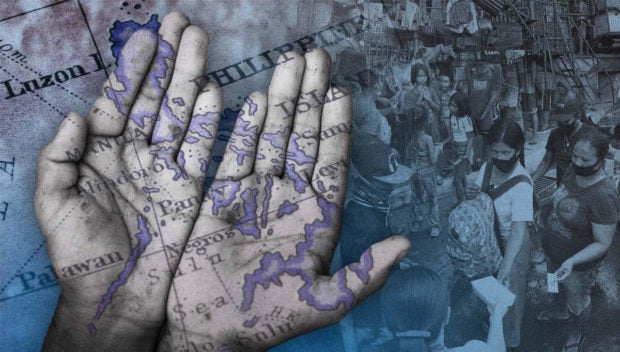 MANILA, Philippines—With the government’s food threshold, Imelda Mendez, 42, who spends P25 for her lunch—a cup of rice and a viand of vegetables—is not considered poor.

Last Aug. 15, the Philippine Statistics Authority (PSA) said the food threshold for a family of five in 2021 was P8,379, indicating that the government won’t classify you as “food poor” if you spend more than P18.62 per meal. 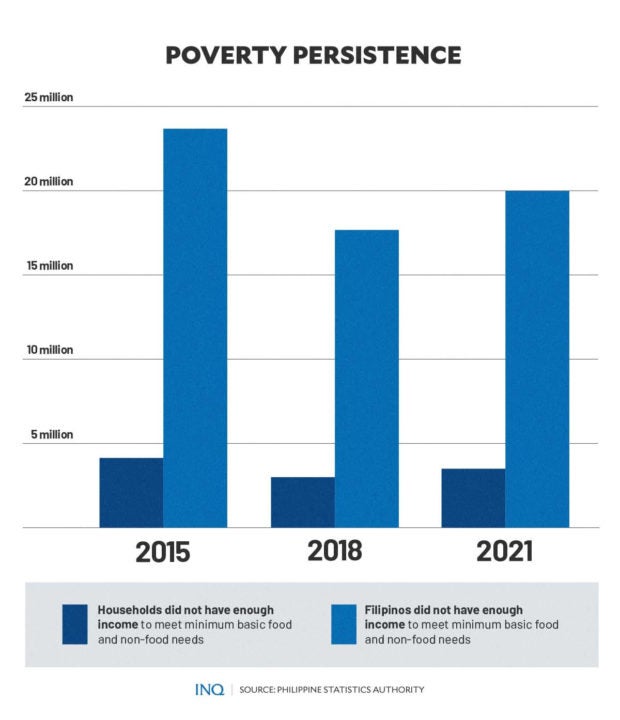 But as the think tank Ibon Foundation said in 2019, the way the government counts the poor “grossly underestimates” poverty in the Philippines, stressing that many poor Filipinos are left out of the data.

The food threshold of P8,379 in 2021 was higher than P7,553 in 2018. Food threshold is the minimum income that a family of five needs to meet basic food requirements.

Mendez, a peanut vendor, said she earns P300 to P350 every day, and, because her husband does construction work once in a while, she stressed that there are times when they move past the poverty threshold or the government’s definition of poor. 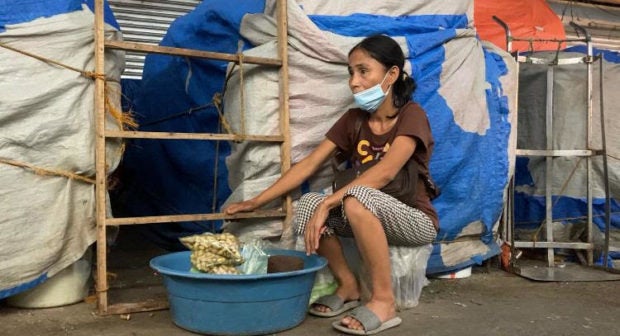 LIVING IN POVERTY. Imelda Mendez, 42, works from 3 a.m. to 3 p.m. every day inside the Cauayan City Public Market, to bring home a meager amount of money for her family. PHOTO BY KURT DELA PEÑA

(Our daily income is really not enough. We’re only making do with what we have because life is really hard nowadays.)

The PSA said 1.04 million households (3.9 percent), or 6.55 million Filipinos (5.9 percent), did not have enough income to meet even their basic food needs last year. As a result, they are the “food poor.” 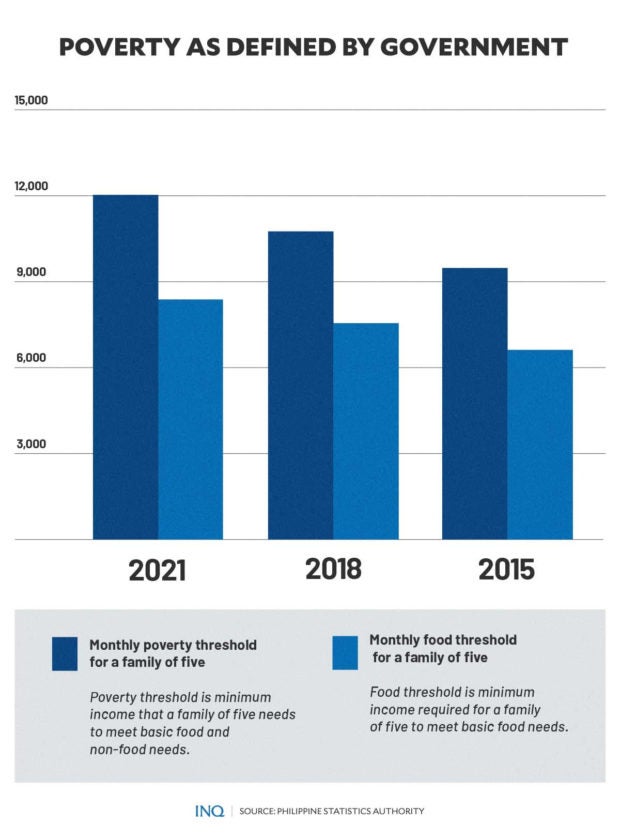 The P12,030 poverty threshold in 2021 was 69.83 percent for basic food requirements and 30.17 percent for basic non-food needs, Social Weather Stations president Mahar Mangahas said in his column for the INQUIRER.

READ: Poverty seen from above

(The problem now is that I really don’t know what to do to make our income enough for all our daily needs.)

She said most of the P300 to P350 she earns every day is for basic food needs while the remaining amount is for basic non-food requirements. “Pinagkakasya lang namin ‘yung sa pagkain kasi kailangang may matira pa para sa iba pang gastusin,” she said.

(We’re spending less on food because we still need to pay some on other needs.)

‘Left with no choice’

The latest poverty threshold of P12,030 for a family of five per month indicates that each member only has P80.2 daily for basic food needs (P55.86) and basic non-food requirements (P24.34).

Josefina Quilang, 43, a vegetable vendor, told INQUIRER.net that while her family of six aspires for a better life, poverty leaves them with no choice but to make do with what they have. 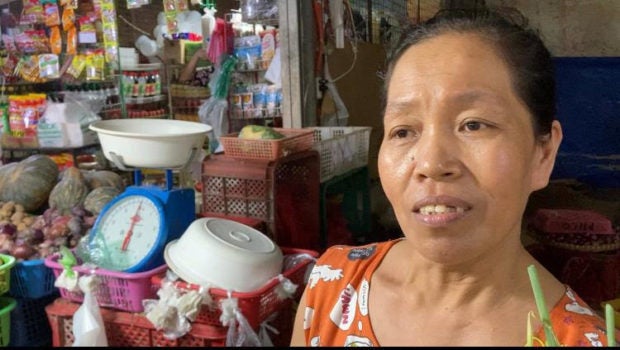 MAKING DO WITH WHAT THEY HAVE. Josefina Quilang, 43, shares her daily struggles amid rising inflation and worsening poverty. PHOTO BY KURT DELA PEÑA

(Because life is hard, we are only making do with what we have for food and basic non-food needs, even if we have a meager amount.)

She said to make do with what they have, her family allots only a kilo of rice for the day—breakfast, lunch, dinner—while limiting basic non-food expenses. She stressed that life is really tough for her and her family. 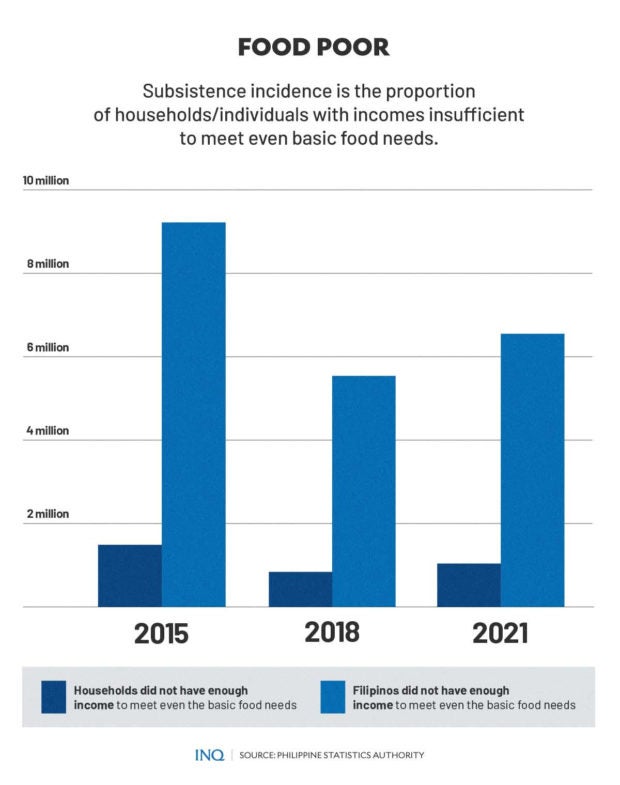 This, as inflation in the Philippines hit the 6.4 percent mark last month because of faster increases in the prices of meat and fish, gasoline and transportation, and electricity.

Like Quilang, Nelson Yap, 48, a smoked fish vendor, told INQUIRER.net that he and his family already decided to spend less to cope with worsening poverty and inflation.

(We have children. My wife and I already have a business here in the market, but we are still struggling because only a few people are going here to buy. Life is tough nowadays.)

Yap said he and his wife are earning P500 to P700 a day, so like Mendez, they, too, would be considered not poor based on the poverty threshold set by the government. But Yap said the government definition of poor is flawed. He considers himself and his family poor no matter if government-set numbers say they’re not. 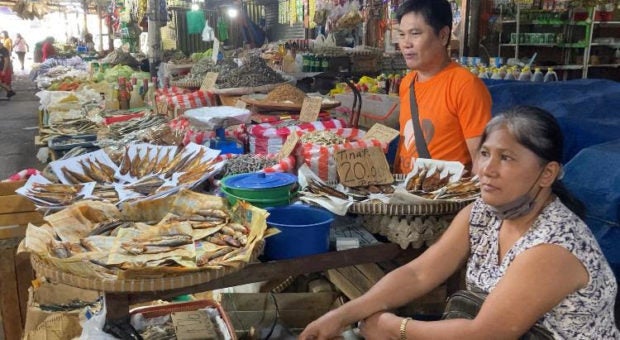 NOT ENOUGH FOR EVERYDAY NEEDS. Nelson Yap, 48, stands behind the sets of smoke fish that he and his wife are selling everyday to make ends meet. PHOTO BY KURT DELA PEÑA

(Here in the market, you will be poorer if you do not borrow money with interest rates. We have no choice but to borrow money because we have nothing to sell if we have no money to invest.)

This was the reason that the Ibon Foundation had said that the government’s way of counting the poor is unrealistic and is detached from daily poverty realities because of “low standards”.

The Social Reform and Poverty Alleviation Act defines “poor” as individuals and families whose incomes fall below the poverty threshold defined by the government or cannot sustainably meet their minimum basic needs.

But as stressed by the think tank, many poor Filipinos, like Yap, are left out of the data. “The monthly poverty threshold is just P10,727 [in 2010] for a family of five. This is just around P71 per person per day at P50 for food needs and P21 for non-food needs.” 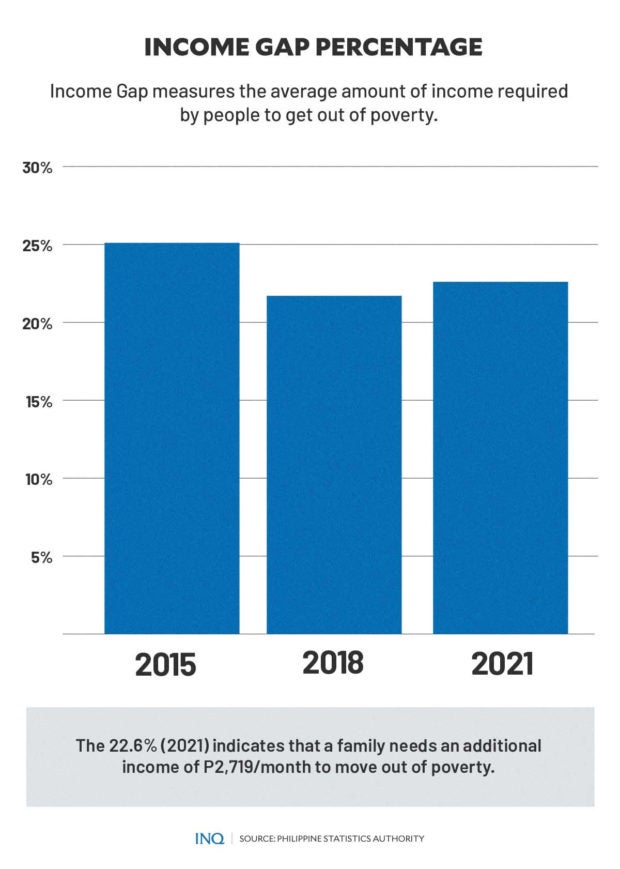 Rosario Guzman, research head of the Ibon Foundation, told INQUIRER.net that the government’s persistence in using “outdated” poverty assumptions is the main hindrance to addressing poverty in the Philippines.

“It allows the government to continue with anti-poor policies, including wage depression, contractualization, and imposition of regressive consumption taxes, while simply relying on limited cash transfers to pacify social unrest,” she said.

The think tank had said last May that a family of five in Metro Manila needs P1,087 daily or P25,605 monthly “living wage,” which the Cambridge English Dictionary said is the wage level that is enough to pay for things that one needs to live.

When President Ferdinand Marcos Jr. delivered his first State of the Nation Address last month, he said he would want to end his six-year presidency in 2028 with a nine percent or single-digit poverty rate.

However, Sonny Africa, executive director of the Ibon Foundation, told INQUIRER.net that it is “extremely unlikely” for the government to achieve a nine percent poverty incidence in 2028.

“The target means that poverty incidence has to be cut by around 1.5 percentage points per year from the 18.1 percent in 2021. This is very much faster than the historical average of a less than one percentage point reduction annually,” he said.

He explained that the easing of poverty in 2018 (16.7 percent) was because of the almost P7,000 increase in the cash transfer given to recipients of the Pantawid Pamilyang Pilipino Program. 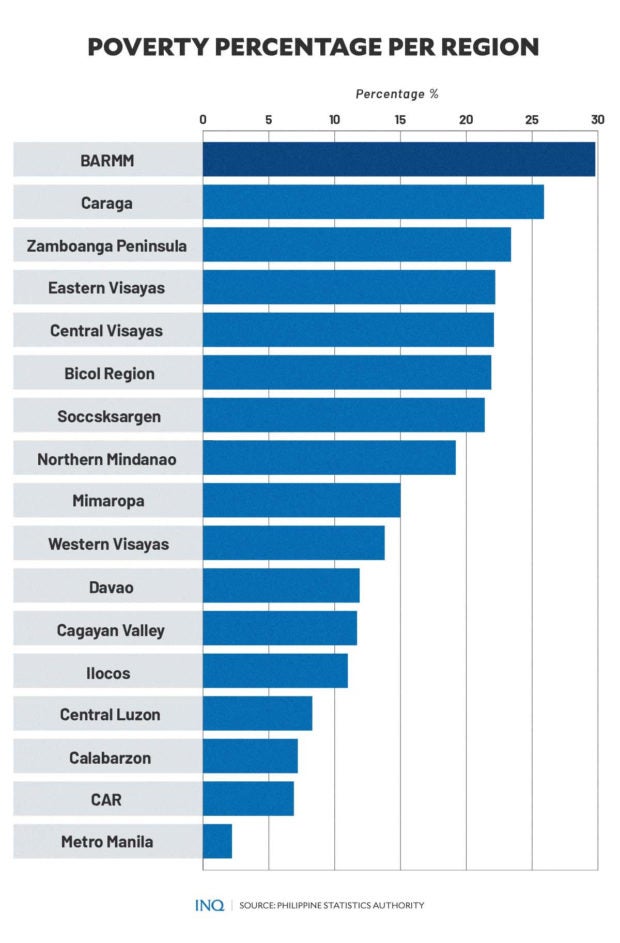 “The large bump in cash transfers was enough to push some borderline poor above the very low official poverty line,” he said, stressing that it is “kind of impossible” to bring down poverty incidence to nine percent.

“Assuming that the poverty line won’t be adjusted downwards to artificially and merely statistically reduce poverty incidence, there are too many factors going against rapid poverty reduction.”

Africa said economic recovery is stalling with a quarter-to-quarter gross domestic product (GDP) contraction in the second quarter of 2022: “It will also be recalled that economic growth was slowing in each of the three years even before the pandemic lockdowns hit, so there’s not even any pre-pandemic growth momentum to go back to.”

The PSA said on Aug. 9 that because of high inflation, the GDP grew at a slower pace of 7.4 percent in the second quarter of 2022. It was, however, still in line with the government’s 6.5 percent to 7.5 percent target for this year.

Africa stressed that the government is entering a period of fiscal austerity with the proposed 2023 General Appropriations Act having the smallest increase in over 20 years and not even keeping up with inflation. 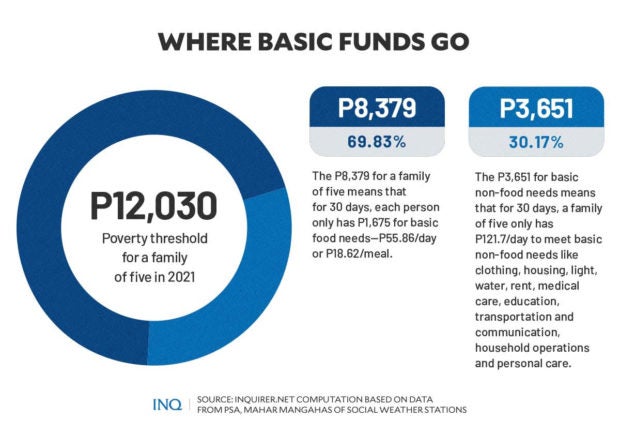 “Its stimulus effect will also be further diminished to the extent that the budget goes to unproductive debt servicing or to import-dependent infra projects,” he said while stressing that the projected P5.27 trillion budget for 2023 is only a meager 4.9 percent increase from 2022 levels.

Job creation is also shallow since most work are poorly paying part-time emplpyment or self-employment and informal work, he said. Especially with inflation high, this will cut into consumption spending which accounts for some 70 percent of GDP.

“Looked at in this context, the ‘9 percent’ poverty incidence target seems like a propaganda device to distract from how serious the social crisis is and how little the administration is prepared to do to deal with this,” he said.

The PSA said the income gap, which measures the average amount of income the poor need to get out of poverty expressed in relation to the poverty threshold, stood at 22.6 percent.

This means a family of five needs an additional monthly income of about P2,719 to escape poverty. The PSA said this could serve as a helpful reference, especially in determining the budget that can be earmarked for programs to lift Filipinos out of poverty.

But Africa had stressed on Twitter that poverty did not have to increase in 2021 if the government had given enough financial assistance to the poor instead of giving corporations more profit.

Likewise, he said poverty did not have to increase in 2021 if the government “tested, traced and treated, instead of its fetish for lockdowns.”

At the regional level, the regions with the lowest poverty incidence among families in 2021 were Metro Manila (2.2 percent), Cordillera Administrative Region (6.9 percent), Central Luzon (8.3 percent), and Calabarzon (7.2 percent).

Meanwhile, the Bangsamoro Autonomous Region in Muslim Mindanao (BARMM) consistently found the highest poverty incidence among families at 29.8 percent in 2021.

More than half of the regions posted significant changes in their incidences from 2018 to 2021. The regions with significant increases were Metro Manila, Mimaropa, Ilocos Region, Central Luzon, Western Visayas, Central Visayas, and Northern Mindanao.

The PSA said significant decreases in poverty incidence were observed in the Cordillera Administrative Region, Davao Region, and BARMM.