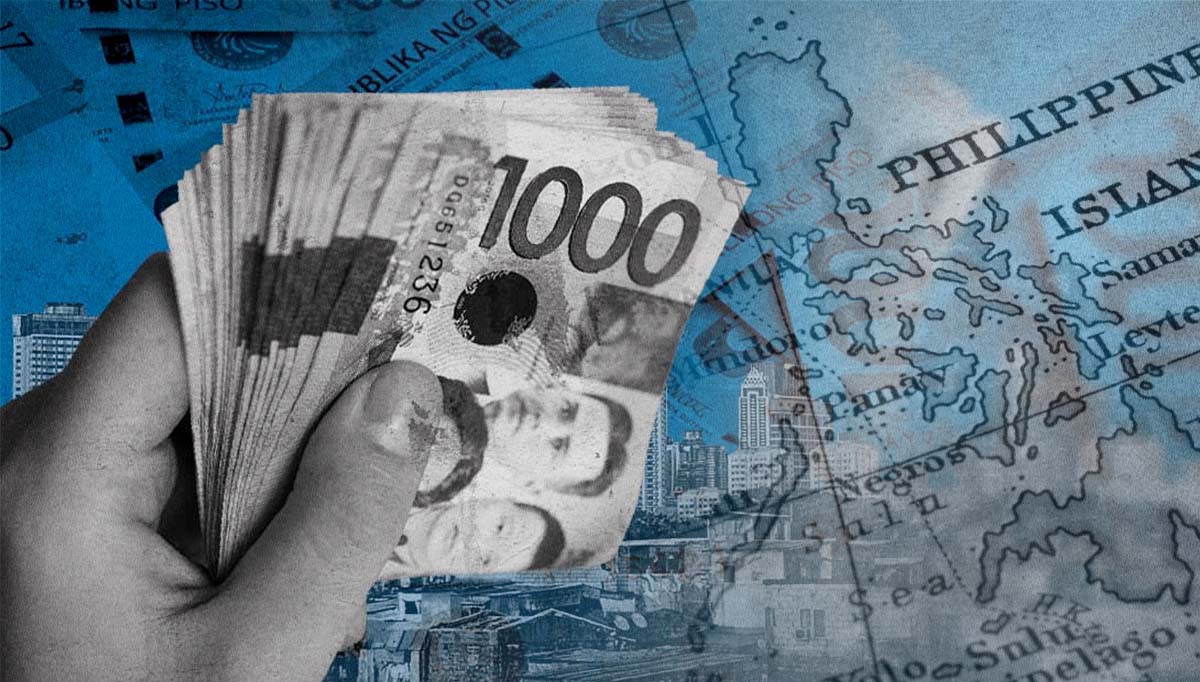 MANILA, Philippines—When President Ferdinand Marcos Jr. delivered his first State of the Nation Address, he said he would want to end his presidency in 2028 with a single-digit poverty rate and government debt that is below 60 percent of the economy.

However, the think tank Ibon Foundation said that with the government’s over-reliance on consumption taxes, which it said erodes the “take home pay” of the poor and the middle class, millions of Filipinos will continue to languish in poverty.

The government’s outstanding debt hit the P12.79 trillion mark in June because of “net issuances of domestic and external loans as well as currency adjustments,” the Bureau of Treasury (BTr) said.

RELATED STORY: Trillions and counting: The mountain of debt next president has to climb

But this year’s borrowings—P2.2 trillion—is expected to raise the outstanding debt to a new high of P13.44 trillion by yearend, with a 17-year-high annual debt-to-gross domestic product (GDP) ratio of 62 percent, breaching the internationally recommended ratio of 60 percent for debt to be manageable.

This, while the Philippine Statistics Authority (PSA) said that there are 20 million Filipinos—18.1 percent of the population—living in poverty, higher than 16.7 percent in 2018 and the government’s target of 15.5 percent to 17.5 percent.

RELATED STORY: P13-T debt and how to pay it: The monster awaiting Bongbong Marcos 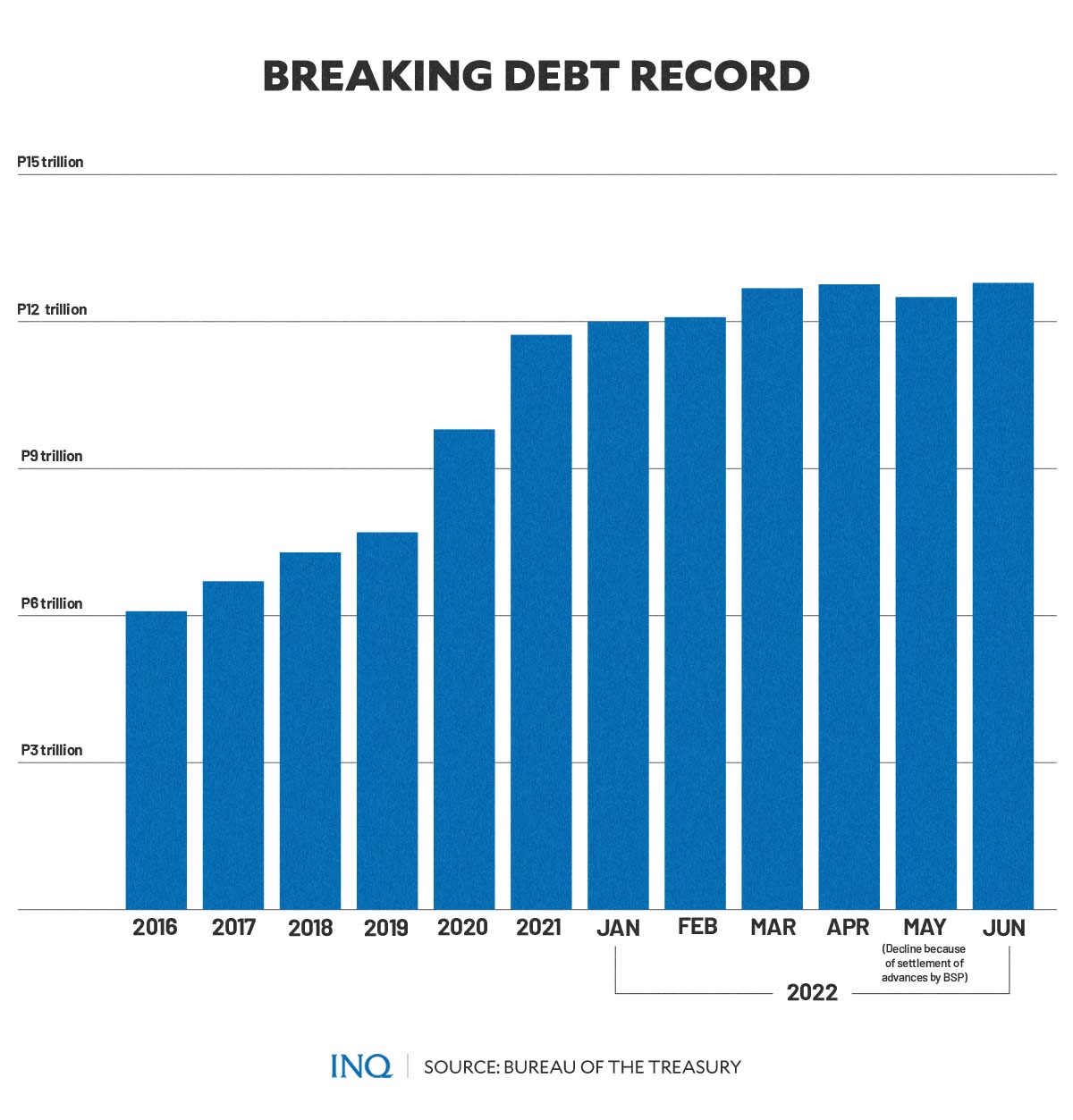 But despite all-time high borrowings, which the previous administration of Rodrigo Duterte had said was intended for COVID-19 response, Finance Secretary Benjamin Diokno said “we will not go the Sri Lanka way.”

This year, Sri Lanka’s debt-riddled economy has “collapsed,” with its government, which owes $51 billion, failing to make interest payments on its loans. As a result, even essentials, like food and medicine, are now scarce.

Last week, the BTr said that the share of the government’s outstanding debt to the economy eased to 62.1 percent in June from the 63.5 percent in March, which is the highest since the 65.7 percent in 2005.

However, the debt-to-GDP ratio, which is the better way to determine an economy’s capability to service its loans, still exceeded the 60 percent threshold that is considered manageable by multilateral lenders for developing economies, like the Philippines’.

Income can’t catch up with spending

The BTr said last month that the government’s budget deficit for June widened to P215.5 billion, which is 43.81 percent higher than the P65.7 billion that was recorded a year ago.

The June outturn was driven by the 27.91 percent growth in expenditures (P505.8 billion) which outpaced the 18.20 percent increase in government receipts, or revenue (290.3 billion).

It said that the expenditures, which is 27.91 percent, or P110.4 billion, more than the P395.4 billion spending last year, was because of higher capital outlay disbursements for infrastructure, military modernization, and social services.

“Spending, likewise, grew on the back of the implementation of various social protection programs of the Department of Social Welfare and Development, the release of the P10-billion coco levy fund, and higher personnel services expenditures,” the BTr said. 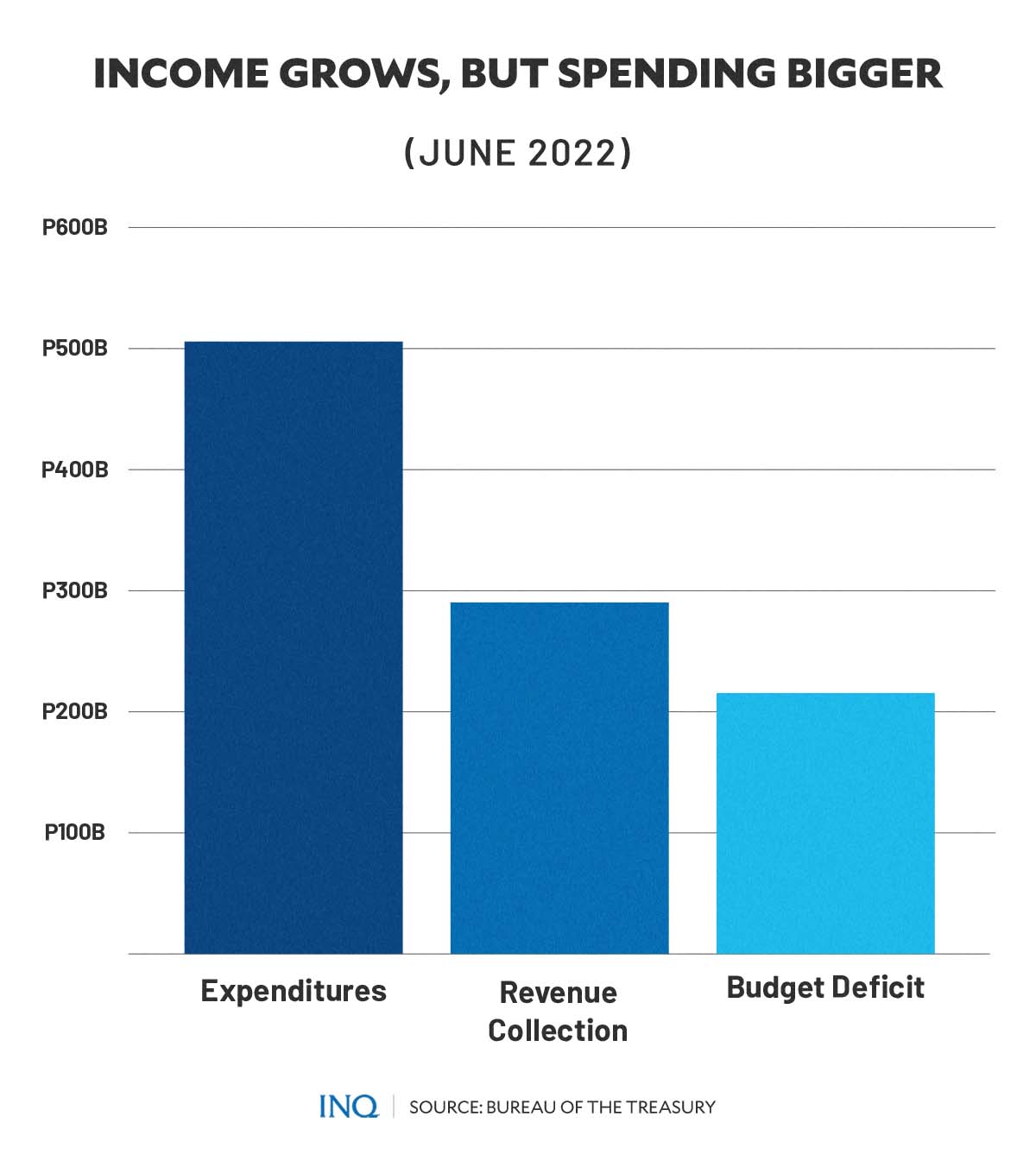 The government’s revenue collection, meanwhile, increased by only 18.2 percent to P290.3 billion in June—Bureau of Internal Revenue (P173.5 billion), Bureau of Customs (P76.2 billion), and other offices (P1.1 billion).

Diokno, who served as governor of the Bangko Sentral ng Pilipinas under Duterte, said former finance secretary Carlos Dominguez III was “very good at making sure that we borrow at the lowest possible rate.” 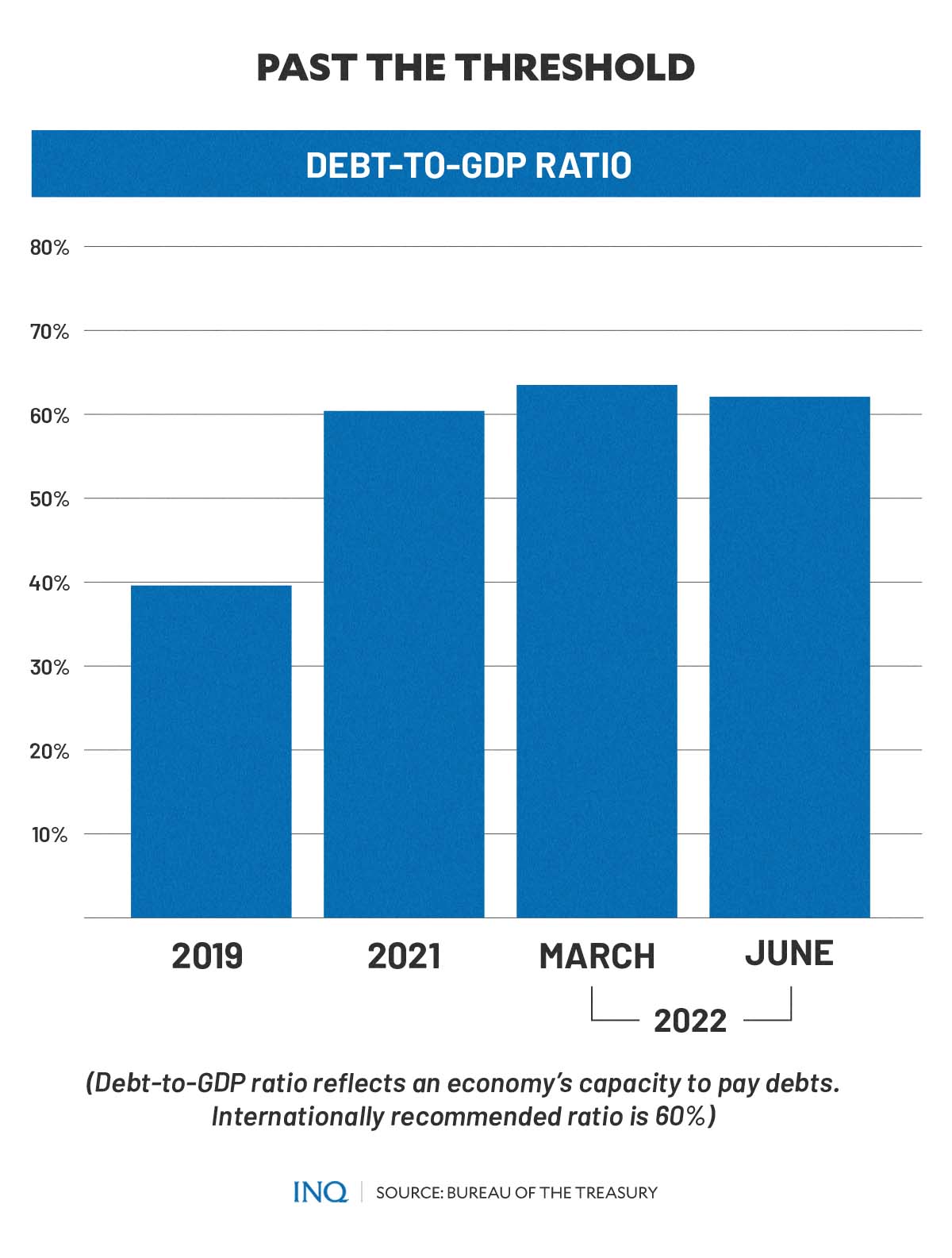 The Marcos administration said it was looking at gradually reducing the debt ratio to 52.5 percent by 2028, the end of Marcos’ term. Back in 2019, debt-to-GDP already fell to 39.6 percent, but COVID-19 borrowings brought government obligations to all-time highs.

Sonny Africa, executive director of the think tank Ibon Foundation, told INQUIRER.net that “the government ultimately repays debt with the revenues it generates,” but there’s a problem with how income is generated.

He stressed that the tax reforms of the previous administration significantly shifted the tax system “towards regressive indirect consumption taxes and away from progressive direct income taxes.”

Consumption taxes are those “paid directly or indirectly by consumers” through the sales of goods and services—taxes which are “at the expense of poor and low-income Filipinos.” 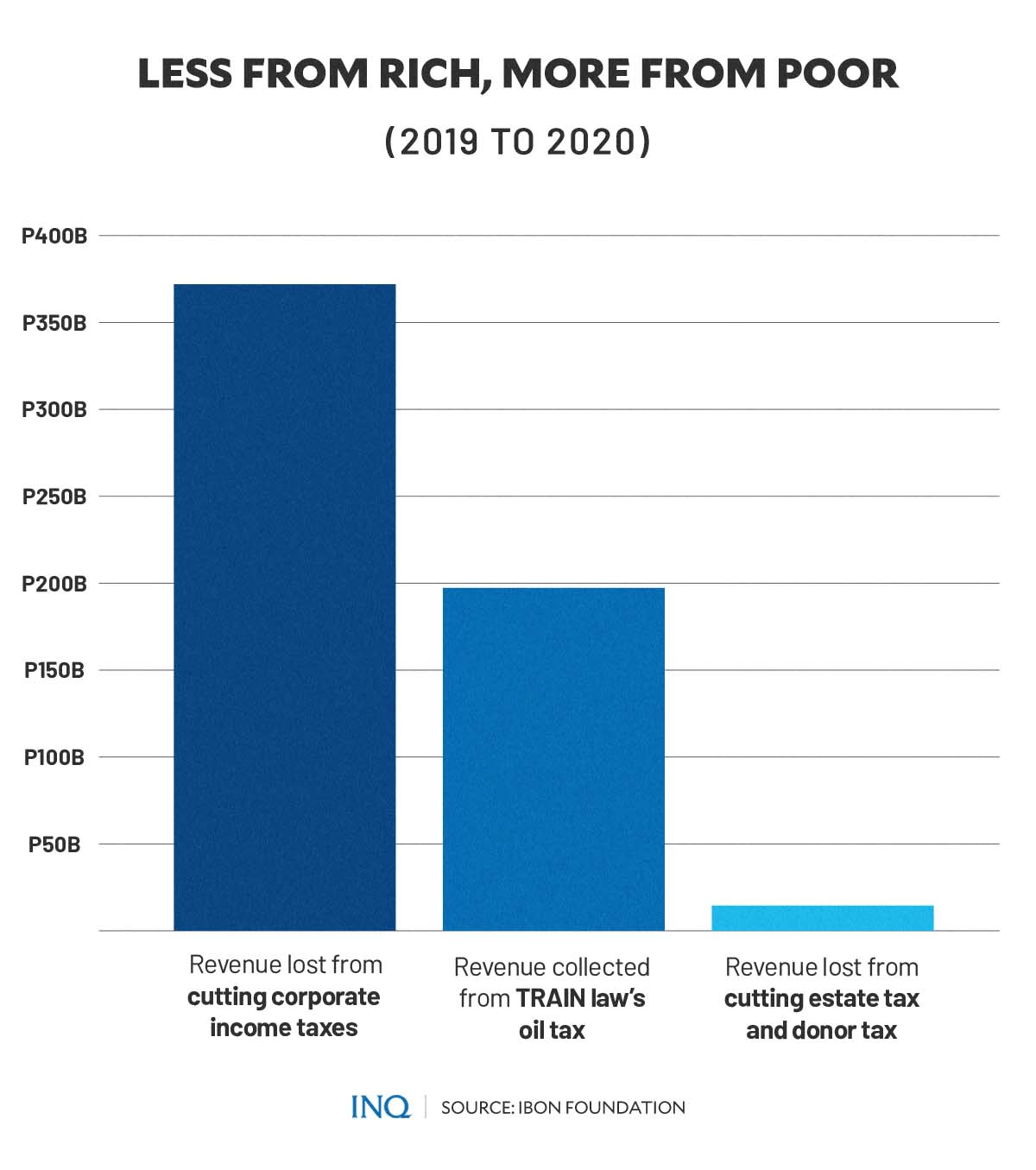 He said the Tax Reform for Acceleration and Inclusion (TRAIN) Act increased consumption taxes on essential and previously VAT-exempt goods and services while reducing the income and estate taxes even on wealthy families.

This, while stressing that despite the two-tiered corporate income tax bracket, most of the tax cuts from the Corporate Recovery and Tax Incentives for Enterprises (Create) Act still go to large corporations.

Africa said poor and middle class Filipinos now bear a disproportionately greater tax burden than before, while most wealthy families and every large corporation have a lower tax obligation.

“The huge and worsening income and wealth gaps in the country and our urgent need for revenues makes this especially unconscionable,” he said, stressing that government policies are making Filipinos’ consumption fall and welfare decline.

Based on data provided by Ibon Foundation, the TRAIN law’s oil tax provision led to a collection of P197.3 billion in 2019 to 2020, while the cut in estate and donor taxes resulted in loss worth P14.5 billion. 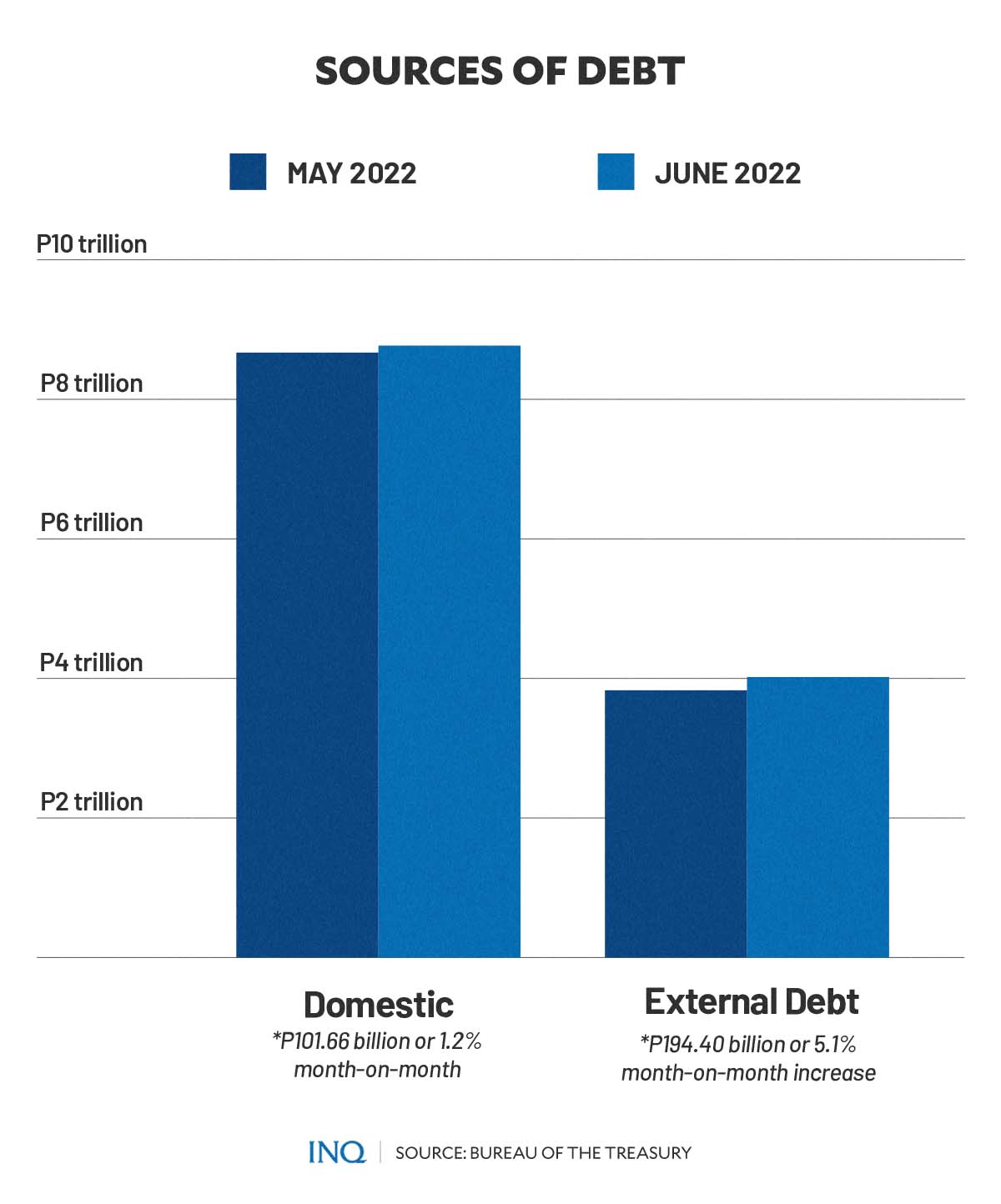 Ibon Foundation said its studies showed that the Create law would lead to P251 billion in foregone revenue—P133.2 billion in 2020 and P117.6 billion in 2021—which could have been spent on stronger COVID-19 response.

It stressed that because of the government’s over-reliance on “regressive” ways of income generation, indirect consumption taxes grew to 3.6 percent of the GDP in 2020 compared to 2.5 percent in 2008.

This, while corporate taxes fell to 2.8 percent of GDP in 2020 compared to 3.5 percent in 2008, Ibon Foundation said: “Over-reliance on regressive consumption taxes is a self-imposed straitjacket.”

Harder life for the poor

Africa said the “insensitive and unfair tax reforms have eroded the take home pay of the poor and the middle class, and made them even more vulnerable to worsening inflation.”

Based on data from the PSA, headline inflation in the Philippines hit the 6.4 percent mark in July because of faster increases in the prices of meat and fish, gasoline and transportation, and electricity.

Last February, Dominguez proposed new or higher taxes to pay for the loans that the Duterte administration incurred, especially to address the COVID-19 crisis.

However, Africa said that the problem with the proposal is not the income being generated but where they are being generated from, saying that an estimated three-fourths of the projected take will be from indirect consumption tax.

Marcos and Diokno are not keen on additional tax measures, although they plan to impose a 12-percent value-added tax on digital transactions and tax single-use plastics. They also plan to reform property valuation and capital market taxation, which the Duterte administration had initially proposed.

READ: No need to raise taxes yet

But last month, as Makabayan lawmakers proposed to cut the income tax for middle-income families, Diokno said that it is “too early” to make changes in the existing tax system on personal income.

Africa said revenues are never enough for the expenditures of the government and that deficits are normal, but “our deficits will just get bigger, or our social and economic services compressed, without creative leaps in revenue generation.”

“A billionaire wealth tax is exceedingly relevant and urgent,” he said.

“If the government really wants to raise revenues, it should support the billionaire wealth tax bill that was filed by Makabayan representatives last year,” Africa had said last March.

He explained that 2,919 Filipino billionaires are worth a combined P8.1 trillion, which is already 16 percent of the wealth of the Philippines. “A tiny wealth tax on this will contribute P467.1 billion to government revenue,” he said.

However, Diokno said he was not keen on backing proposals to make tax rates for the rich higher, saying that such a move might drive away potential investors in the Philippines.

“You might turn off many of these people. Those who want to enter the Philippines might think twice about doing so. That kind of effect, so you have to weigh all of these factors,” he said.

For Africa, the debt is a drag on growth only if the government does not overcome its self-imposed fiscal straitjacket of refusing to tax billionaires and large corporations more.

“It needs to spend much more on an expansionary fiscal program to speed recovery but this won’t happen if it remains obsessed with containing debt and with creditworthiness,” he said.

Rosario Guzman, head of research of Ibon Foundation, said the goal to reduce debt-to-GDP ratio to below 60 percent is premised on an economic ambition of attracting foreign capital and higher private capital participation in infrastructure.

“The lower ratio may be achieved in the administration’s midterm, but this would eventually mean a government revenue counterpart that is collected largely through regressive consumption taxes.”

“The double burden, aside from the ratio still not being low enough, is that the debt will eat up a huge portion of the government budget that could have gone to social services,” Rosario told INQUIRER.net.