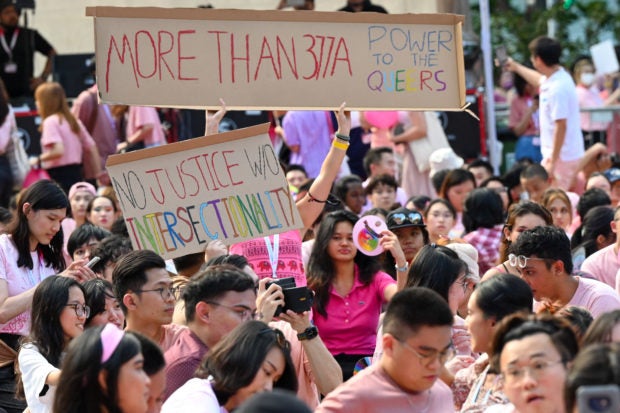 Supporters attend the annual “Pink Dot” event in a public show of support for the LGBT community at Hong Lim Park in Singapore on June 18, 2022. AFP

SINGAPORE — Singapore’s LGBTQ community on Monday welcomed the government’s plan to decriminalize gay sex but warned that upholding the traditional definition of marriage would only promote further inequality.

Prime Minister Lee Hsien Loong announced on Sunday that the city-state would repeal the colonial-era law, but said the definition of marriage as being between a man and a woman will be kept to allay fears of “a drastic shift in our societal norms”.

Section 377A of Singapore’s penal code penalizes sex between men with up to two years in jail.

Gay rights campaigners have long said the law runs counter to the affluent city-state’s vibrant culture and have unsuccessfully challenged the law in court.

“I am elated and relieved for Singapore’s LGBT community,” said Roy Tan, one of several people who had unsuccessfully challenged the law in court.

Describing the repeal as the result of an “arduous” struggle, Tan said “we can progressively dismantle the impediments to the visibility and progress of queer citizens”.

While the law remained on the books, no one had been arrested or charged under Article 377A in Singapore for more than a decade, activists say.

Lee said national policies such as those covering access to subsidized public housing and adoption rules will continue to be based on the traditional definition of marriage.

As it stands, people can still challenge the constitutionality of the definition. Lee, however, said that doing so would risk the court stepping into policy-making.

“Judges interpret and apply the law… They have neither the expertise nor the mandate to settle political questions, nor rule on social norms and values,” Lee said.

Reactions to Lee’s Facebook post on repealing the law were mixed, with some lauding the move as a “bold step” while others said they were “saddened” by the decision.

The constitution would need to be amended to shield the definition of marriage from further constitutional challenges, Lee said, a move that is likely to sail through parliament if undertaken as the ruling People’s Action Party has a more than two-thirds majority.

It was unclear what the amendments would look like but the challenges to 377A largely revolved around a constitutional provision which guarantees citizens equality and equal protection under the law.

The LGBTQ community said the repeal “is the first step on a long road towards full equality”.

But they opposed any further laws and constitutional changes to protect the traditional definition of marriage as they would promote unequal treatment.

“We urge the government not to heed recent calls from religious conservatives to enshrine the definition of marriage into the constitution,” more than 20 LGBTQ groups said in a joint statement late Sunday.

“Such a decision will undermine the secular character of our constitution, codify further discrimination into supreme law, and tie the hands of future parliaments.”

Tan, the activist, said: “I look forward to a future where we can hold our heads up high as equals in the eyes of the law instead of living as marginalised, second-class citizens in our own country.”

According to a 2020 report by the International Lesbian, Gay, Bisexual, Trans and Intersex Association (ILGA), homosexuality is prohibited in 69 countries, including 11 where it is punishable by death.