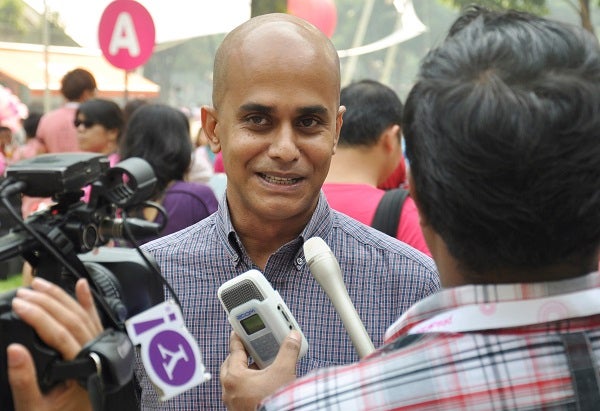 In this Saturday, June 29, 2013 photo released by Pink Dot SG rally organizers, Singapore’s first openly gay politician, Vincent Wijeysingha, a member of the opposition Singapore Democratic Party, speaks to reporters at the annual Pink Dot SG rally in support of gay rights in Singapore’s Hong Lim Park. Wijeysingha recently confirmed that he is gay and said he believes Singapore’s government will someday be forced to abolish a law that criminalizes consensual sex between men. AP

SINGAPORE — This conservative city-state convicted men for homosexual behavior as recently as seven years ago, and the British colonial-era law it used is still on the books. The government shows no interest in making a change: The prime minister’s advice has been to just let things be.

Opposition official Vincent Wijeysingha isn’t taking that advice. On his Facebook page last week, he became the first Singaporean politician to come out of the closet, and he is advocating for the law to be scrapped.

He told The Associated Press on Monday that although the government resists decriminalizing homosexuality, “society will eventually overtake it on this question.”

“I am entirely convinced the law will eventually be repealed,” said Wijeysingha (wee-jay-sing-ga), treasurer of the Singapore Democratic Party.

The decades-old law makes “gross indecency” between men punishable by up to two years in prison. It has not been actively enforced in recent years, but 185 men were convicted under the law between 1997 and 2006, according to government data.

Complaints of discrimination based on sexual orientation have become less common in Singapore, a Southeast Asian economic powerhouse of about 5 million. But until a decade ago, government policies barred gays from “sensitive positions” in the civil service and imposed strict censorship on gay-related content in movies and TV shows.

Gay rights have grown around the world; more than a dozen countries and 13 U.S. states now allow same-sex marriage. But according to the United Nations, about 75 countries continue to criminalize homosexual behavior; in a few of them, it is punishable by death.

Singapore’s High Court in April rejected a bid by a gay couple to scrap the city-state’s law, ruling that Parliament should be responsible for making any changes.

Prime Minister Lee Hsien Loong said earlier this year that these were “not issues that we can settle one way or the other, and it’s really best for us just to leave them be, and just agree to disagree.”

Gay-rights activists said that is unacceptable to a growing number of Singaporeans. They noted that Saturday’s Pink Dot gay advocacy rally drew more than 20,000 people to a Singaporean park, the best showing ever for the event, which has been held every year since 2009.

The rally played a role in Wijeysingha’s announcement. He had spoken at past forums on gay issues, and associates and friends had known that he is gay, but he confirmed it publicly on his Facebook page by saying “yes, I am going to Pink Dot … and yes, I am gay.”

“It’s the first time he has said it so explicitly in public,” said Siew Kum Hong, a lawyer and political commentator. “To that extent, it does show that Singapore society is opening up more, since he obviously does not think that it is fatal to his electoral chances.”

Baey Yam Keng, a lawmaker from the ruling People’s Action Party, said that although he is unsure how most Singaporeans feel about homosexuality, “the time will come for Parliament to open up another debate” on decriminalizing it.

“There is a lot of stigma still associated with homosexuality in Singapore,” Baey said. “Even though more people showed up at this year’s Pink Dot event, including straight people, it’s hard to say if homosexuality is widely acceptable yet in Singapore. But I think it is important for stakeholders and the government to be open and have continuous engagement regarding this issue.”

Baey commended Wijeysingha for being open about his sexuality, saying that “it must have taken a lot of courage to do what he did.”

Wijeysingha said the best response he has received is from young people who have told him that he has given them courage by coming out. But he said he will work on more than gay rights.

“My value system is one of equal rights to all,” he said. “Human rights are indivisible.”