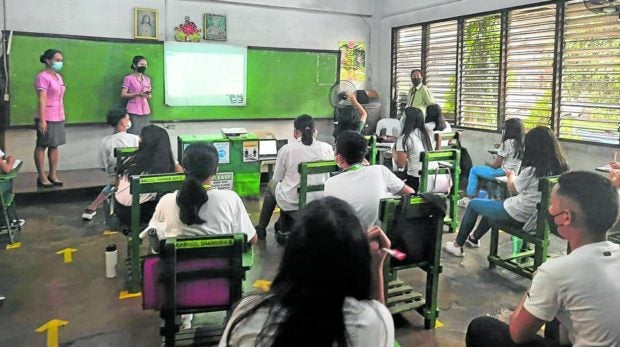 MANILA, Philippines — The Kabataan Party-list group released a checklist that would allow students nationwide to gauge the safety of their schools and the quality of education they are getting to make a fair assessment of the schools’ preparation for the opening week of classes.

As most face-to-face classes resumed on Monday, the group launched the Bantay Balik-Eskwela Checklist, a Google form that encourages students to correctly assess how their respective schools are faring in safety protocols.

The Department of Education (DepEd) decided to resume face-to-face classes for the school year 2022 to 2023, even as the country was dealing with a new surge of coronavirus cases. While the department gave assurance of the schools’ readiness to conduct in-person classes, some groups were still wary about the schools’ capabilities to prevent COVID-19 transmissions.

“To help students nationwide assess the safety of their school opening and the quality of their education amid pandemic, Kabataan Partylist and the National Union of Students of the Philippines along with other youth groups crafted the Bantay Balik-Eskwela Checklist,” Kabataan said in a statement.

“This will serve as a tool to objectively measure readiness of schools for a safe reopening based on scientific and internationally recognized standards laid down in House Bill 251 or the Safe School Reopening Bill,” it added.

Kabataan said that students and school officials should not look at the survey as a way to shame schools, saying that the goal of the checklist is to provide suggestions about improving the state of education in the country.

“We encourage students to use this checklist, not to shame their school, but as a means to know what can still be improved. The Department of Education, if anything, is primarily accountable for lack of preparedness detected among schools,” the group said.

He said that a Safe School Reopening Bill, Student Aid Bill, and a higher education budget would be lobbied for by the end of the week. Reopening a safe school requires a budget of 122.4 billion pesos alone.

As of Friday, at least 46 percent of public and private schools are ready to conduct face-to-face classes, while the rest still use blended learning schemes, which means that 24,175 out of 54,900 campuses will provide face-to-face instruction.

However, Alliance of Concerned Teachers (ACT) Representative France Castro shared photos and videos taken during their visits to several schools that began face-to-face classes on Monday. The photos show students crammed into a single classroom and others left stranded.

“House Deputy Minority Leader and ACT Teachers Partylist Representative France Castro today conducted an initial Bisita Eskwela in Apolonio Samson Elementary School where more than 40-50 students are crammed in a single classroom so that they can comply with the full face-to-face classes,” Castro’s office said.

“Also hundreds of commuters are waiting along Commonwealth Avenue due to the lack of public transport,” she added.

Just earlier, DepEd spokesman Michael Poa said they believe that the school opening went well after they have not yet received any complaints as of 9:20 a.m.

(As of 9:20 a.m., based on the updates from our regional directors, the school opening is so far orderly and peaceful. We have not yet received any reports of untoward incidents. However, we will continue monitoring our schools.)

Your subscription could not be saved. Please try again.
Your subscription has been successful.
Read Next
Cargo vessel capsizes in Albay due to ‘Florita’
EDITORS' PICK
Omega Speedmaster super racing: Tiny device massive change
Fuel price rollback expected on Feb 7
House energy committee chair Arroyo bats for cheap electricity
Philippine-United States alliance ‘rock solid’ — DFA
Makabayan bloc blasts bid to expand US access to more military bases in PH
vivo Philippines offers a free bouquet of flowers and a premium necklace perfect for Valentine’s Day
MOST READ
Vice Ganda gets called out for ‘unfair treatment’ of ‘It’s Showtime’ co-host Karylle
Fuel price rollback expected on Feb 7
Kris Aquino gets ‘renewed confidence’ after consultation with new doctor: ‘I have a strong chance of getting better’
Pokwang tells self amid revelations on past relationship: ‘Bangon, nanay ka’
Don't miss out on the latest news and information.