No De Lima visit, but US lawmakers got to see Marcos | Inquirer News

No De Lima visit, but US lawmakers got to see Marcos 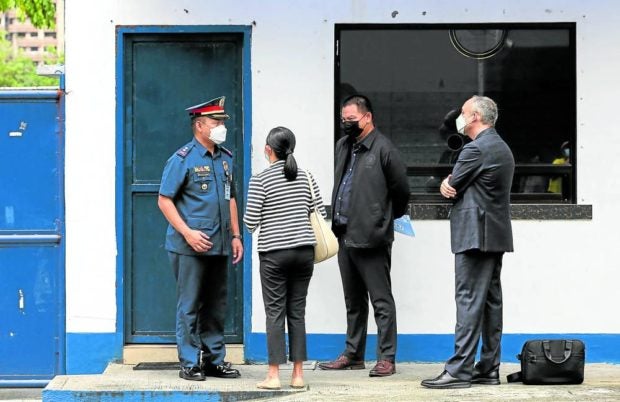 A foreigner who was part of the group accompanying a delegation of United States lawmakers led by Sen. Edward Markey waits outside the Custodial Center in Camp Crame where Sen. Leila de Lima has been detained for more than 2,000 days. The delegation was supposed to visit De Lima but were not allowed by the Philippine National Police to meet with her. INQUIRER PHOTO/LYN RILLON

Five American lawmakers were barred from visiting former Sen. Leila de Lima in detention at Camp Crame in Quezon City on Thursday, supposedly for not having the court’s permission and because of the worsening COVID-19 situation at the general headquarters of the Philippine National Police.

The delegation was led by Sen. Edward J. Markey, a Democrat from Massachusetts who chairs the US Senate foreign relations subcommittee on East Asia and Pacific, and who has been vocal in calling for De Lima’s release since her incarceration on drug trading charges in 2017.

Markey was one of three American senators banned by former President Rodrigo Duterte from entering the Philippines in December 2019 and January 2020 after they sponsored a US travel prohibition on Filipino officials who had a role in keeping De Lima incarcerated.

Thursday’s visit by the US lawmakers was supposed to happen before noon with a convoy of three coasters and two vans arriving at the PNP Custodial Center at around 11 a.m.

Some US Embassy personnel and a De Lima lawyer, who had arrived earlier, spent more than 30 minutes trying to negotiate with the guards at the gate, only to be given the signal to leave.

The convoy left the camp at around 11:15 a.m. without speaking to the media.

But while they couldn’t meet De Lima, the Americans got to visit President Ferdinand Marcos Jr. at Malacañang later in the afternoon.

The President posted a photo of the courtesy call on his Facebook page, saying: “We look forward to continuing our partnership with the US in the areas of renewable energy use, agricultural development, economic reform, and mitigation of drug problem.” The group also met Justice Secretary Jesus Crispin Remulla, according to the US Embassy.

PNP spokesperson Col. Jean Fajardo said the officials’ visit to De Lima was not part of the original plan but an “offshoot” of their request to check on the condition of the facilities at the detention center.

“But their visit is not limited to the PNP, as they intend to inspect jail facilities under the [Bureau of Jail Management and Penology],” she told reporters.

The US lawmakers were allowed to see the facility but were prohibited from interviewing any person in PNP custody, including De Lima, or they would be violating security protocols and judicial processes, according to Fajardo.

But it appeared that not even the physical inspection of the custodial center pushed through, as the Inquirer saw no one alighting from any of the vehicles in the convoy before they left.

PNP public information office chief Brig. Gen. Roderick Augustus Alba said the camp was hoping to extend “utmost courtesy and assistance” to the US delegation but in a way that was “consistent with existing guidelines and procedures on (visitation) privileges in the detention facility.”

READ: PNP bars US legislators’ visit to De Lima due to lack of authority from court

He noted that the Headquarters Support Service, which is tasked to oversee security at the camp, had even prepared a briefing for the visiting US officials.

“However, such accommodation excludes direct interaction with any person under police custody (PUPC) confined in the detention facility, particularly PUPC committed by the court to PNP custody,” Alba said.

He noted that there was no express permission from the concerned judicial authorities for the De Lima visit. He also cited the “prevailing COVID-19 situation in Camp Crame.”

As of Thursday, there were 15 active COVID-19 cases and one new case at the camp, according to Alba.

In May, six US senators, including Markey, called on the Philippine government to immediately release De Lima and drop the charges against her after key witnesses retracted their allegations against her.

“Clearly, the bogus charges against her were, as we suspected all along, politically motivated and based on false information. That she has lost five years in jail due to these spurious charges is a travesty,” the senators said in a joint statement.

De Lima, who lost her reelection bid in the May polls, has been detained at the PNP facility since February 2017 on charges she was involved in the drug trade at New Bilibid Prison in Muntinlupa City during her term as justice secretary under the Aquino administration.

Several witnesses, including former Bureau of Corrections chief Rafael Ragos and confessed drug trader Kerwin Espinosa, have withdrawn earlier claims about her supposed drug connections. The retractions fuelled the clamor of human rights groups for the Department of Justice to review her two remaining cases and to finally set her free.

The Office of the Ombudsman, in a Jan. 5 resolution made public only this month, also dismissed the bribery complaints against De Lima and her former aide Ronnie Dayan.

The PNP’s refusal on Thursday to allow visitors to the former senator was not the first. In mid-2020, citing pandemic restrictions, her custodians enforced a strict no-access policy at the camp, and for nearly two months De Lima saw no other people from outside Crame.

Still, observers noted an apparent double standard in the PNP’s treatment of its past and present detainees, depending on how they are regarded by the incumbent administration.

In June 2014, during the early days in detention of Senators Jinggoy Estrada and Bong Revilla, who were then facing plunder charges over the pork barrel scam, members of the media observed that the relatives of the two senators were being allowed to stay at the custodial center beyond the visiting hours.

On one particular weekend, they reported seeing large food packs, including that for lechon (roasted pig) and deliveries from restaurants, being brought to the compound.

The apparent laxity that allowed visitors to overstay and practically have a party inside the custodial center eventually stopped after it was exposed and the warden was sacked.