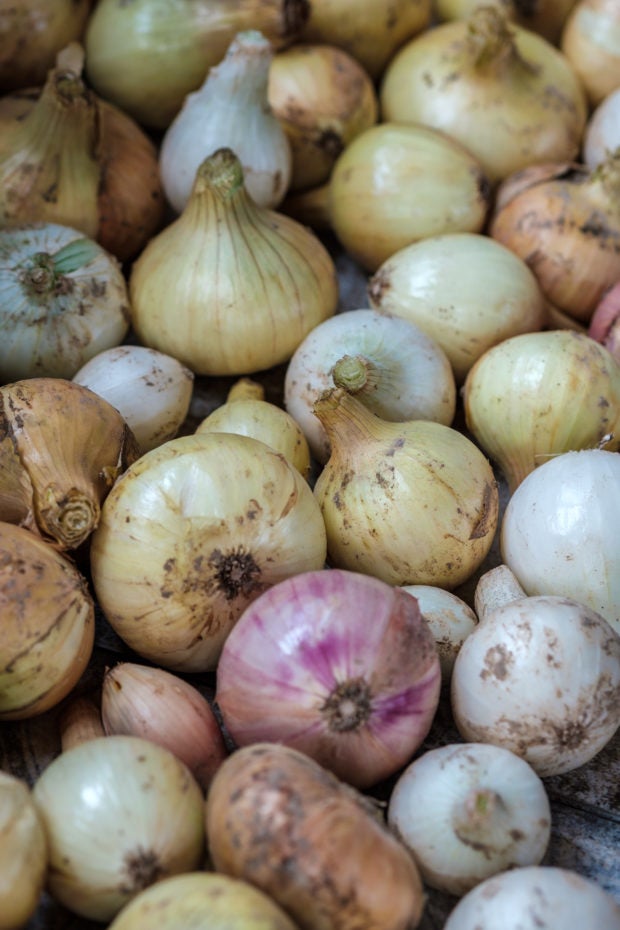 Local onion producers said their stock of white onions has been depleted as early as July, but assured the public of enough supply of red onions until before the holiday season.

“Yun pong ating supply ng pula base doon sa huling meeting natin sa plant industry ay aabot iyan ng middle ng December 2022 (In the case of red onions, based on our last meeting with the [Bureau of] Plant Industry, the supply will last until the middle of December 2022),” he said.

The Inquirer reached out to the Department of Agriculture (DA) but did not get a comment on the issue.

Llamas said onion farmers in Nueva Ecija harvested a total of 350,000 bags, of which 50,000 bags were white onions. The harvest season varies per province but he said it usually starts in the second week of January until February. Generally, the storage life of onions lasts for one to three months.

As of Thursday, local red onion in Metro Manila markets retails for P120 to P170 a kilo, based on the DA’s price monitoring, higher than P90 to P120 per kg a year ago.

White onions, on the other hand, were “not available” based on the same DA price monitoring. Yet, last August 11, imported white onions were sold for as high as P400 a kg from only P70 to P80 last year.

Just recently, the DA convened concerned stakeholders to discuss the onion supply situation in the country.

“We are asking them to check the warehouses,” he added.

The idea of restaurant owners themselves importing the commodities was suggested and Cainglet said the restaurants were considering the proposal.

Llamas said they were not opposing the importation of onions to plug the shortfall as long as it would be regulated.

Central Luzon was the leading producer of bermuda onion while Ilocos region posted the highest production of native onions for the quarter.

Read Next
No De Lima visit, but US lawmakers got to see Marcos
EDITORS' PICK
Smart, TNT launch more powerful and value-packed Double GIGA+ 50 offer
Pagasa: No tropical cyclone expected in the next few days
House energy committee chair Arroyo bats for cheap electricity
NDRRMC confers posthumous award on 5 fallen Bulacan rescuers
Having confidential funds not a DepEd norm – Pimentel
Motorcycles, smartphones, and cash prizes up for grabs in TNT’s ‘Tuloy Ang Saya’ Raffle in Mindanao
MOST READ
Sharon Cuneta ‘turned away’ at Hermes boutique in Seoul, welcomed by LV
Having confidential funds not a DepEd norm – Pimentel
What are the chances? 433 bettors win ₱236M Grand Lotto 6/55 jackpot
Marcos in Singapore for F1 Grand Prix – source
Don't miss out on the latest news and information.