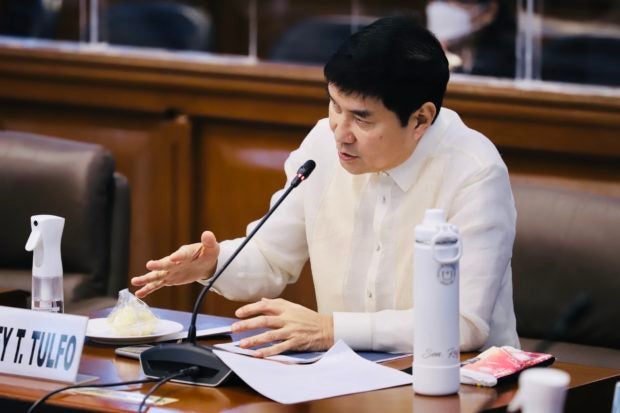 Citing several incidents reported to his office, the neophyte lawmaker pointed out some of his “frustrations in dealing with the PNP” during the organizational meeting of the Senate committee on public order and dangerous drugs.

(More often than not, our police officers settle road accidents by siding with whoever has more money. I know a lot. I’ve lost count. It must have reached hundreds already.)

(Maybe we should stop that kind of practice. The police should file complaints and blotter reports, and also push for inquest proceedings for those that need to be investigated. They shouldn’t facilitate settlements since that should be done in village offices or in courts, not in our police stations.)

He then noted that the standard operating procedure for conducting arrests are also left unfollowed by some police officers.

(Now, the police immediately arrest the suspect or whoever they think is the suspect. They even strike the suspects on the nape.)

Tulfo also claimed that police officers frequently use crimes against persons in authority as a leverage over the civilians they are apprehending.

(This is a worn-out case used by the police to show their power over the civilian population. I hope we stop filing these cases against our civilians because nobody will believe you. Who will believe that an unarmed civilian will fight back against many armed policemen?)

Responding to this, Senator Ronald dela Rosa, who formerly served as the PNP chief, said the key to more transparent police operations is for body-worn cameras to be used by all officers on the field.

(It really doesn’t look good when an ordinary motorist suffers because of the ill acts of the police. Not all of them, but I’ve also received complaints like this before.)

He later outlined his other action points to address the complaints Tulfo lodged against the PNP.

“I will try to look into all the observations that you made mention,” he said. “All our PNP personnel will be reminded from time to time na ayusin iyong kanilang pag-iimbestiga, and huwag ho iyong ang nahihirapan nga, [tulad ng] sabi ng ating Senator Raffy Tulfo, iyong mga mahihirap. We’ll have to deal with that.”

(As Senator Raffy Tulfo mentioned, our PNP personnel will be reminded from time to time to do their investigations right and get rid of any unfairness toward the poor. We’ll have to act on it.)

Read Next
Russia says ‘no need’ to use nuclear weapons in Ukraine
EDITORS' PICK
Percy Lapid’s kin: ‘We demand that his cowardly assassins be brought to justice’
Nothing’s certain so here’s how everyday Filipinos can make the most out of their Plan B
Do all the things you do, faster
PNP vows to bring justice for slain Percy Lapid; says probe underway
House energy committee chair Arroyo bats for cheap electricity
‘Seniority’ requirement despite vacant posts in DOH bothers senators
MOST READ
Student stabs teacher dead in Samar town
Trixie Angeles quits as press secretary due to health reasons
Not rehired?: Trixie Angeles not on list of reappointed Cabinet execs
Heart Evangelista to stay abroad ‘indefinitely’: ‘Hindi muna ako babalik’
Don't miss out on the latest news and information.