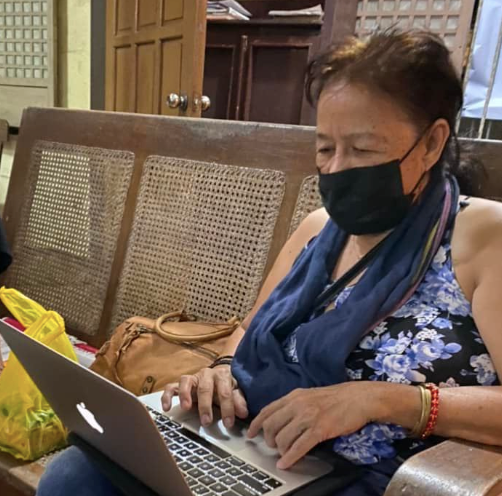 MANILA, Philippines—The environmental activist, who was arrested last Saturday (June 12) for alleged rebellion, had shown confusion about whom the arrest order was for, questioning officers who read her Miranda rights.

In footage from a police body camera shown at the [email protected] program of the Philippine National Police (PNP) and the UNTV Network, arresting officers were seen reading Miranda rights to Daisy Macapanpan, an environmental activist accused of being a communist rebel. The footage was shown to dispute talk that her arrest was illegal.

However, Macapanpan, who was accused of being part of the communist rebels’ Southern Tagalog Regional Party Committee, was seen asking the officers who they were arresting as several aliases had been mentioned during the arrest.

(You are Ka Tian Tyan, you Ka Tian Tyan is being arrested for the case of rebellion under Criminal Case No. 2941-01, issued by Judge Arnelo Mesa of RTC Branch 65 of Infanta Quezon.)

After this, a male officer can be heard instructing somebody to continue with the arrest. As the female officer continued reading the Miranda rights, Macapanpan appealed again for the officers to bring her first to the barangay office supposedly to verify her identity.

(Can we wait for a while, can we please go to our village head. Let us go to our barangay captain because I don’t know who you are arresting.)

Macapanpan was arrested last Saturday after police said that she was a member of the New People’s Army committee operating in Southern Tagalog. However, friends and relatives of the environmental activist condemned the manner in which she was arrested, claiming it was an overkill as over 20 officers went in to apprehend an unarmed senior citizen.

Information from police from General Nakar, Quezon said that several teams from the Philippine Air Force, Philippine Marines, the Special Action Force, the Calabarzon Regional Police, local police, and many other law enforcement units led the operation to serve the warrant of arrest on Macapanpan.

But, according to Quezon provincial deputy police chief Lt. Col. Noel Divino, police were only ensuring that officers were safe, insisting that Macapanpan was a ranking leader of the Communist Party of the Philippines (CPP) and NPA.

(First of all, we were accompanied by the Special Action Force, these 25 SAF troopers are only for added security. And then only five of the local police went in to arrest the suspect.)

Several of Macapanpan’s colleagues, including those from her days as a University of the Philippines—Baguio instructor, called on police to release the activist from detention claiming that she had been involved only in defending people’s environmental rights.

Even the mayor of the town where Macapanpan lived, Pakil Mayor Vince Soriano, had condemned the arrest, saying that she was being detained on vague charges.