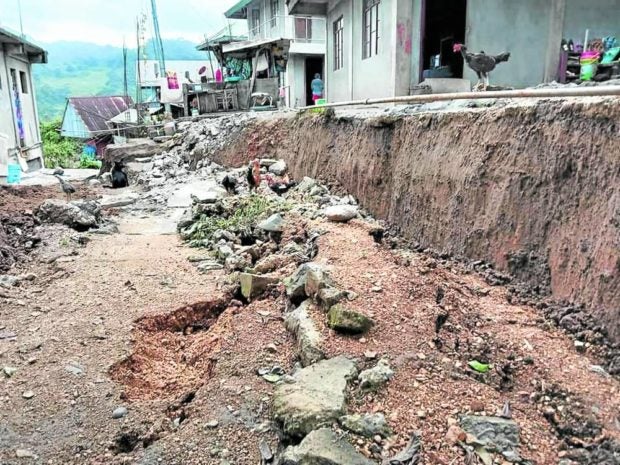 CRACKED | The magnitude 7 earthquake that hit northern Luzon on July 27 pushes the ground apart at Sitio Tatabra-an in Barangay Sacasacan, Sadanga town, Mountain Province, with portions of the road sinking by at least a meter, as shown in this photo taken on Aug. 7, 2022. (Photo from the Sadanga Municipal Social Welfare and Development Office)

BAGUIO CITY, Benguet, Philippines — Five families in Barangay Sacasacan in Sadanga town, Mountain Province, were forced to evacuate their houses after the ground in the area continued to sink by a meter every day, the Municipal Social Welfare and Development Office (MSWDO) said on Sunday.

Large cracks began to appear on the ground of Sitio Tatabra-an in Sacasacan immediately after the destructive magnitude 7 earthquake struck northern Luzon on July 27, but the sinking of the soil intensified on Aug. 4, according to an advisory from the Sadanga MSWDO.

A road and four rice granaries in the village were also damaged by the earth movement. As of Monday, the subsidence, including on sections of a road in the village, was estimated to be at a depth of at least 4 meters.

The sinking ground forced Sacasacan officials to place the village under a state of calamity on Aug. 5, according to the barangay disaster risk reduction and management council. The village has a population of 655 based on the 2020 census.

On Monday, Sacasacan villagers helped the affected families bring their belongings to safety due to the ground’s gradual caving in, posing danger to their lives and properties. It was not immediately known how many individuals belonged to the five displaced families.

Local officials have yet to estimate the cost of damage to Sacasacan’s infrastructure, but the strong earthquake left five people injured in the entire Sadanga.

Most of the victims were hit by falling objects in the aftermath of last month’s strong temblor, the epicenter of which was traced to Tayum town, in Abra province. Tayum is about 190 kilometers from Sadanga.

Last week, the towns of Bauko and Besao, both in Mountain Province, were also placed under a state of calamity due to the damage left by the earthquake in these localities.

The Bauko town council passed the resolution containing the declaration on Aug. 5, saying that the estimated cost of damage across sectors reached P173 million.

In its resolution, the Bauko government said 27 schools, 21 government buildings, a hospital, a communal irrigation system and five road networks were damaged during the quake.

At least P143.7 million worth of damage to agriculture and infrastructure was recorded in Besao, prompting the calamity declaration on Aug. 1.

2 hurt due to falling rock in Mountain Province