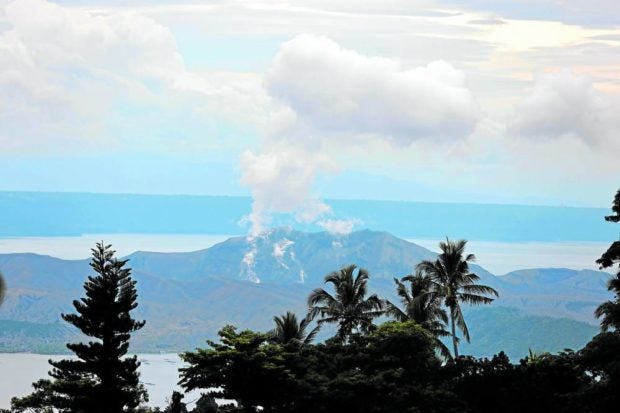 STEAM ACTIVITY Taal Volcano is showing signs of renewed unrest, with sulfur dioxide emission reaching over 17,000 metric tons on Sunday and voluminous steam-rich plume activity in the past three days, as shown in this photo taken on Monday. Residents in areas surrounding the volcano are asked to stay alert even as the volcano remains under alert level 1. —GRIG C. MONTEGRANDE

Taal Volcano continued to spew more sulfur dioxide (SO2) on Sunday, reaching a new record-high nearly a month after its warning status was lowered to alert level 1.

According to the Philippine Institute of Volcanology and Seismology (Phivolcs), the volcano’s SO2 gas flux was at 17,141 metric tons per day on Sunday, which was about three times higher than the average of the previous recordings.

Phivolcs noted that Taal’s SO2 emissions were at an average of 6,041 MT a day since July 15, an increase from the average of 1,289 MT daily between May and mid-July.

Volcanic gases were seen to drift east to west of Taal Volcano Island (TVI) based on air parcel trajectory, the Phivolcs said.

State seismologists also reported that increased degassing was visible in the form of upwelling in the Main Crater Lake and a voluminous steam-rich plume activity in the past three days.

According to the US Geological Survey, volcanic gas emissions can pose environmental and health risks to nearby communities, but these are determined by wind direction and speed, along with air temperature, humidity, rainfall, location of the source and the amount of SO2.

SO2 gas can irritate skin and the tissues and mucous membranes of the eyes, nose and throat. It can aggravate preexisting respiratory problems.

Phivolcs reminded the public that Taal Volcano remained in an “abnormal condition” and “should not be interpreted to have ceased unrest nor ceased the threat of eruptive activity.”

“Should an uptrend or pronounced change in monitored parameters forewarn of renewed unrest, the alert level may be raised back to alert level 2,” the agency noted.

Local governments were also asked to continuously assess previously evacuated barangays around Taal Lake for damage and road accessibility while intensifying their preparedness, contingency and communication measures in case of renewed unrest.

Phivolcs said entry into the volcano island and Taal’s permanent danger zone, especially the vicinity of the main crater and the Daang Kastila fissure, as well as human activities on Taal Lake, must be prohibited.

The agency also asked civil aviation authorities to advise pilots to avoid flying near or over TVI as airborne ash and ballistic fragments from sudden explosions and wind-remobilized ash may pose hazards to aircraft.

TVI, which sits in the middle of Taal Lake and is locally known as “Pulo,” has been off limits to its former residents following the volcano’s major eruption in January 2020 that caused thousands of residents to flee and generated up to 3,000-meter flumes that brought ashfall as far as Metro Manila.

Since then, Taal, one of the country’s most active volcanoes, has had varying degrees of phreatic or steam-driven eruptions that once again drove nearby residents out of their homes.

Read Next
5 families flee as ground sinks in Mountain Province village after earthquake
EDITORS' PICK
Percy Lapid’s kin: ‘We demand that his cowardly assassins be brought to justice’
Nothing’s certain so here’s how everyday Filipinos can make the most out of their Plan B
Do all the things you do, faster
PNP vows to bring justice for slain Percy Lapid; says probe underway
House energy committee chair Arroyo bats for cheap electricity
‘Seniority’ requirement despite vacant posts in DOH bothers senators
MOST READ
Student stabs teacher dead in Samar town
Not rehired?: Trixie Cruz-Angeles not on list of reappointed Cabinet execs
Final net satisfaction rating slightly decreases for Robredo, Sotto — SWS
Heart Evangelista to stay abroad ‘indefinitely’: ‘Hindi muna ako babalik’
Don't miss out on the latest news and information.