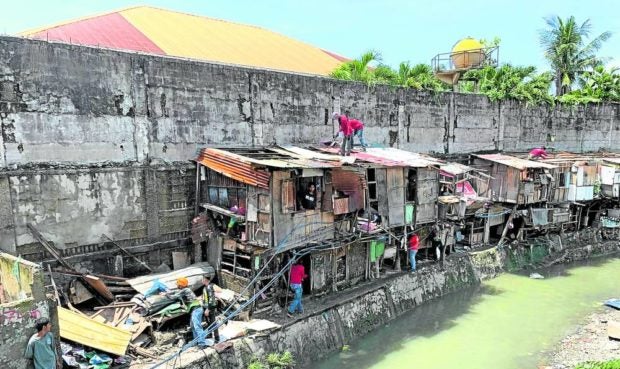 DEMOLITION DRIVE | Personnel from the Cebu City government start dismantling the shanties built along the Kinalumsan River on Monday about a week after the massive flood that was blamed on trash clogging major waterways in the city. (Photo by NESTLE SEMILLA / Inquirer Mindanao)

CEBU CITY, Cebu, Philippines — The local government here on Monday started to demolish makeshift houses that encroached on the three-meter easement of rivers and waterways following a massive flood that submerged large parts of the city last Thursday.

First on the list for demolition were the shanties of around 200 families of informal settlers built along the banks of the Kinalumsan River, which straddles the adjoining southern villages of Mambaling and Duljo-Fatima.

According to Gerardo Carillo, chair of the Cebu City Risk Reduction and Management Council, those displaced were temporarily housed at the San Nicolas Elementary School while waiting for the completion of a government-owned medium-rise building (MRB), now being built in Barangay Duljo-Fatima to accommodate families living along the banks of the Kinalumsan River.

Carillo said the national government through the Department of Public Works and Highways allocated P160 million for the construction of the MRB.

The city government, he said, will purchase container vans where families displaced by the clearing operations will be housed.

Carillo said the container vans will be placed at a five-hectare city-owned land at the South Road Properties.

According to Councilor Jerry Guardo, chair of the Cebu City council’s committee on infrastructure, the affected families that would voluntarily destroy their houses built on the riverbanks would receive P35,000 each from the government.

“The city has long given the settlers notices to remove their houses, and I think it’s high time for them to voluntarily evacuate,” he said.

Authorities said heaps of garbage that clogged drainage systems and shanties built in waterways contributed to the flash floods in the city.

Carillo said at least 14,000 households would be affected by the clearing operations meant to not only mitigate the flood problem but also to beautify the riverbanks by transforming them into an esplanade or a promenade.