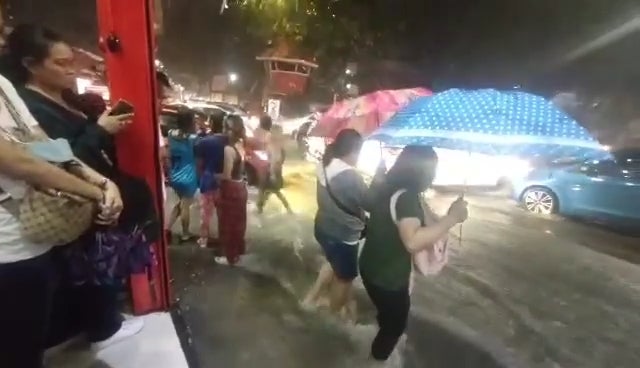 Stranded people on a road in Barangay Punta Princesa in Cebu City wade up to knee-deep waters during the heavy downpour early evening of August 4, 2022. Photo by Dale Israel, Inquirer Visayas

CEBU CITY — Several areas in Metro Cebu were hit by floods — some in waist-deep water — following a heavy downpour on Thursday night (August 4) that caused rivers to swell.

Cebu City government also mounted a search and rescue operation after debris of what appeared to be from houses were seen being swept away by rampaging waters in Kinalumsan River in Barangay Mambaling.

A video taken by Mambaling resident Bruce Contratista showed a man being carried by debris under the Kinalumsan bridge. The man whom residents identified as “Bobby” was seen waving for help to the crowd on top of the bridge.

Contratista said he saw that rescue teams were busy checking the river.

As of 10:30 p.m., the fate of the man remained unknown — whether he was rescued or declared missing.

The Cebu City Disaster Risk Reduction and Management Office had yet to issue a statement.

Floods were also reported in the cities of Mandaue and Talisay as well as in Minglanilla town.

Several workers were also stranded because of the flooded streets.

The heavy rains with moderate winds started past 7 p.m. It stopped past 9 p.m. but it started to rain again at about 10 p.m. but it was not as strong as before.