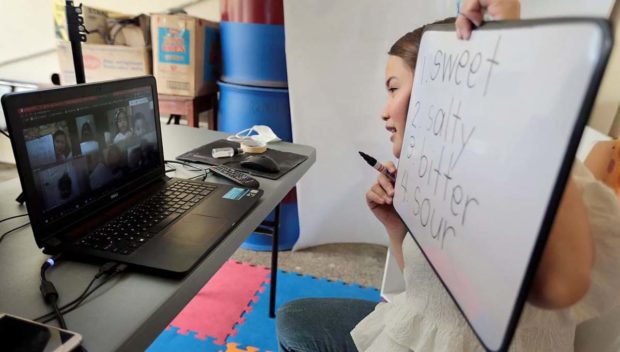 A pre-school teacher holds up a white board in front of her computer while conducting distance learning sessions. FILE PHOTO/GRIG C. MONTEGRANDE

MANILA, Philippines—“Sad and even revolting.”

This was how the Teachers’ Dignity Coalition (TDC) described the purchase of “outdated and pricey” laptops, which the Department of Education (DepEd) received from the Procurement Service of the Department of Budget and Management (PS-DBM).

“While our teachers are forced to take loans to buy their own laptops, it hurts to know that the government has funds that end up buying overpriced and outdated laptops that cannot be used in teaching,” the Teachers’ Dignity Coalition said.

This, as the DepEd confirmed that it received an Audit Observation Memorandum from the Commission on Audit (COA) last March regarding the purchase of P2.4 billion worth of laptops for teachers.

While the DepEd said it was “taking steps” to address recommendations made by the COA, it stressed that the PS-DBM should be the one to answer questions and suspicions over the expensive, outdated laptops meant to help teachers cope with distance learning.

In response, PS-DBM executive director Dennis Santiago said his office would cooperate with the COA over its findings and recommendations.

Santiago said he would direct a “thorough examination” of the cost of the laptops and their specifications, stressing that the PS-DBM is expected to ensure no irregularities in procurement procedures.

“Should the records prove that there are indeed instances of non-compliance with the law and procurement rules, rest assured that we will never tolerate it,” he said.

Because of the COVID-19 crisis, it was deemed necessary for the DepEd to procure laptops for public school teachers so at least P2.4 billion was set aside for it in allocations provided for by Republic Act No. 11494—the Bayanihan to Recover as One Act.

However, the COA said in its report that the laptops, which the DepEd bought through the PS-DBM, were “pricey for an entry-level type.” 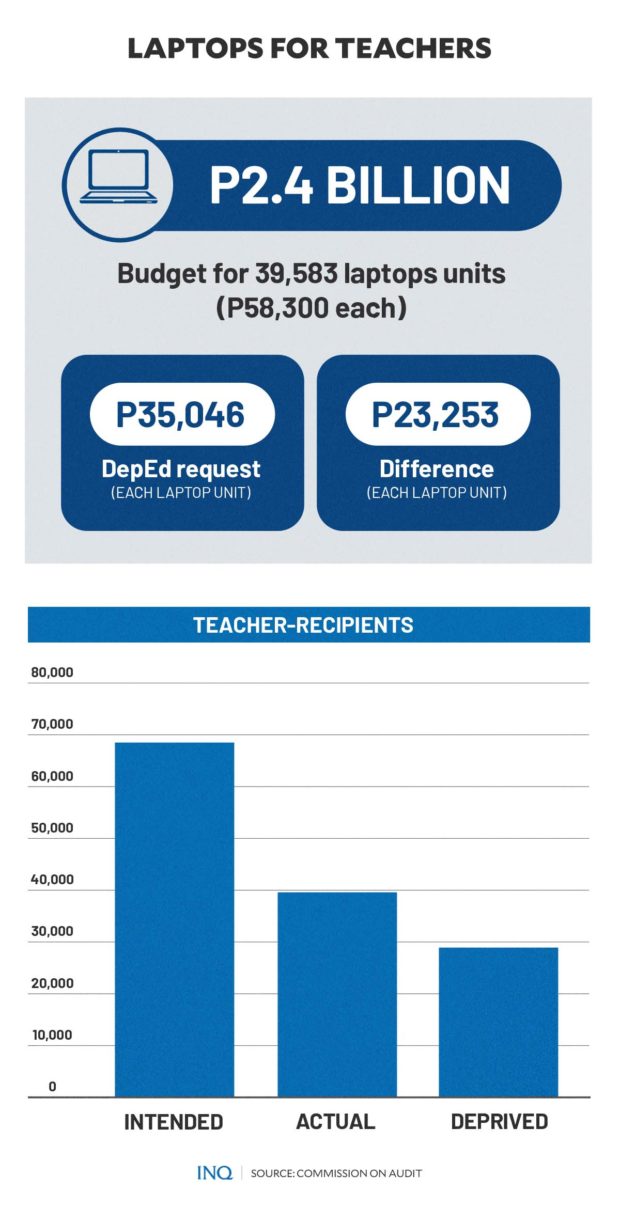 The commission observed that the DepEd’s Agency Procurement Request (APR) reflected that one unit should only cost P35,046 each, while the laptops procured by the PS-DBM were worth P58,300 each but of questionable quality.

It said 28,917 teachers had been “deprived” as the overpriced laptops “adversely decreased the number of intended beneficiaries from 68,500 to 39,583 public school teachers,” or nearly half.

The difference of P23,253 per unit resulted in a significant decrease in purchased laptops— 28,917 units—which were expected to be distributed to recipient teachers to help them cope with blended learning.

The COA also said DepEd’s spending of P4.5 billion funds for the Basic Education Learning Continuity Plan had been marred by procurement irregularities.

As a response, DepEd spokesperson Michael Poa said “we will look at what really happened,” while stressing that there were really instances of delay in procurement because of the surge in COVID-19 cases last year.

The Alliance of Concerned Teachers (ACT) expressed disappointment, saying that some teachers did not receive laptops, while those who were able to get one cannot use them because of their “outdated” specs.

“Most public school teachers are processing loans in the Government Service Insurance System to own a laptop that is good enough,” ACT secretary general Raymond Basilio told One News.

Last year, the National Research Council of the Philippines (NCRP)-Department of Science and Technology said that in most cases, teachers “used their personal resources” on devices and services needed for distance learning. 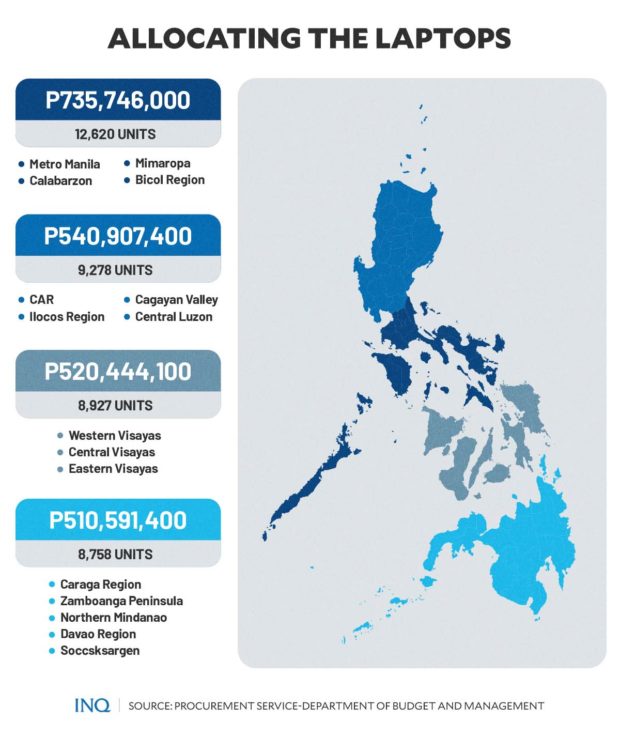 The study “Emergency Remote Teaching Experiences” surveyed 28,859 teachers from kindergarten to senior high school about their experiences and 60 to 63 percent had said that they used personal money to buy laptops for online learning.

READ: Teachers use own money, resources as distance learning weighs heavy on them

Basilio stressed that “it’s really disappointing” to hear that the government bought low-end yet costly laptops. 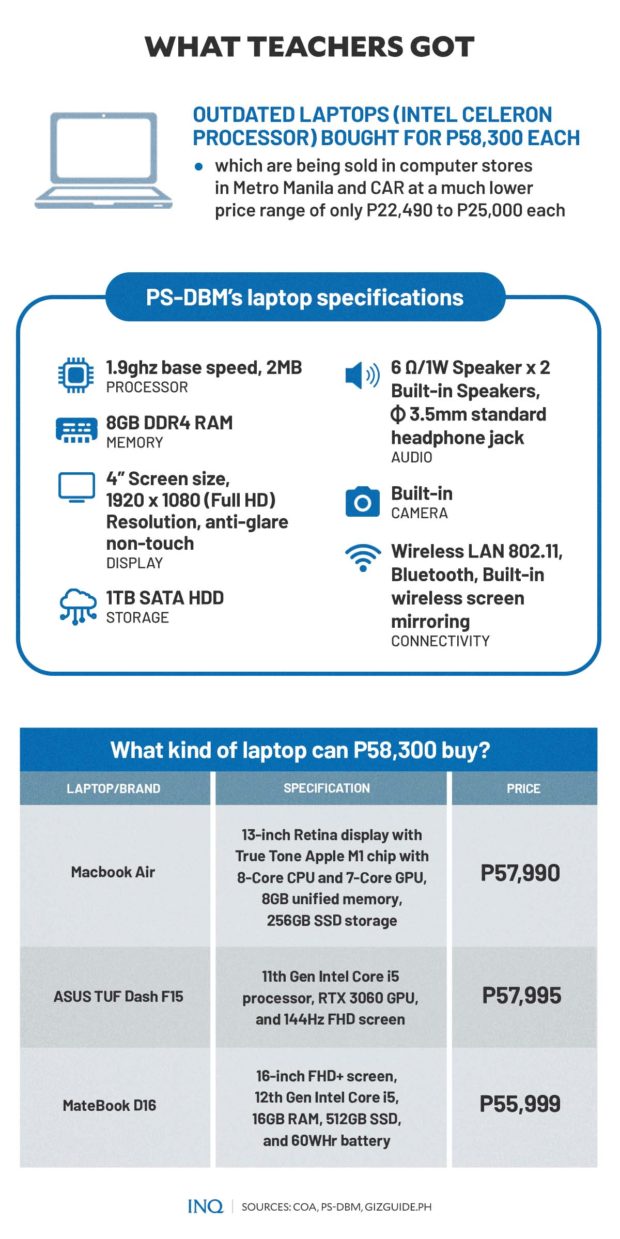 The PS-DBM specs were clear—DepEd laptops for public school teachers should have these specifications:

However, the COA said the laptops bought by PS-DBM for DepEd “are too slow because the processor is outdated” and “pricey for an entry-level type of laptop.” 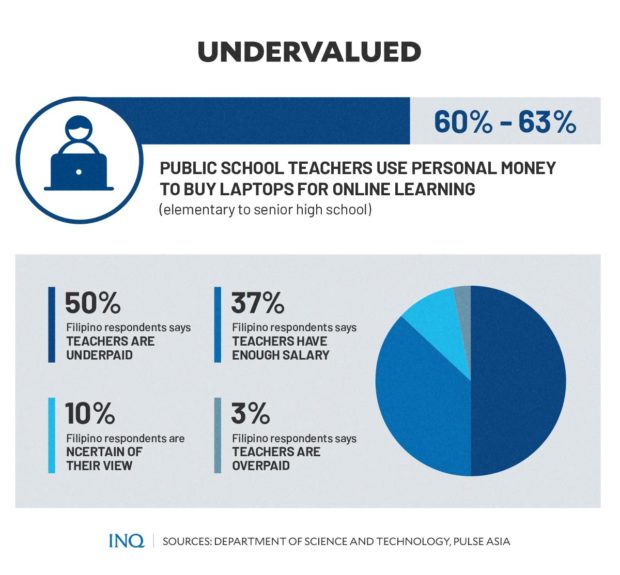 Rep. France Castro (ACT Teachers), citing data from the COA, said the winning bidder offered a Dell Latitude 3420, which is equipped with an 11th Generation Intel Core Celeron that has 1.8ghz Base Speed and 4MB cache.

“The technical working group of the Special Bids and Awards Committee found that the Dell Latitude 3420 is non-compliant with the 1.9ghz clock speed requirement […] Despite this, the PS-DBM procured the said model of laptop.”

“Not only did the government waste the people’s money for purchasing expensive, yet outdated laptops, it also deprived thousands of teachers of gadgets that could have helped them implement distance learning.”

RELATED STORY: PH lags behind in acting on remote learning problems amid pandemic

The Makabayan lawmakers also pointed out that this is not the first time the PS-DBM “purchased overpriced goods” because in 2020, the COA likewise found that the agency awarded billions of pesos worth of contracts to Pharmally Pharmaceutical Corp, which was then undercapitalized and a newly-set up company.

GizGuidePH, a technology-based website, shared on Facebook a graphic that compared the specifications of an Intel Celeron laptop to a MacBook Air, which is worth P57,990.

In a separate article, GizGuidePH likewise listed these laptop models that are worth almost the same as the one that DepEd bought through the PS-DBM:

Based on COA research, the same model and brand of laptops with bigger screens—15.6inches—are being sold in computer stores in Metro Manila and CAR at a much lower price range of only P22,490 to P25,000 each.

State auditors also noted that changes in the requirements were disadvantageous to DepEd as the agency was able to buy, also through the PS-DBM, laptop units that were cheaper at P45,431.20, faster and better, in May 2021.

In June 2020, DepEd also engaged the services of the PS-DBM for the procurement of brand-new laptops with faster processors at P32,500 each.