MANILA, Philippines—Old and worn out.

This was how the teachers’ welfare advocacy group Alliance of Concerned Teachers (ACT) Philippines described the latest response of the Department of Education (DepEd) to teachers’ plea for salary increases.

Last June 8, ACT Philippines secretary general Raymond Basilio had asked the new administration to increase the pay of teachers, expressing hope that the successor to Rodrigo Duterte, Ferdinand “Bongbong” Marcos Jr., will listen to the cry of teachers, who are already struggling with coping with rising costs of basic goods.

Basilio said the economic hardships of teachers stem from the basic problem of low salary: “It’s well-known how teachers struggle to feed their families and shoulder the costs of education even before the pandemic hit.”

Marcos, who had filed bills to increase teachers’ pay when he was still senator, said he will institute programs to improve the life of teachers and inspire them to provide the highest quality of education to students.

RELATED STORY: Outside of Sona, the promises made by Bongbong Marcos

“We need to provide our teachers with all the necessary support because they are the ones molding our young students to become better, responsible and productive citizens who in turn would become the country’s future leaders,” he said last March 19.

This was the reason that ACT Philippines expressed disappointment when Marcos, in his first State of the Nation Address (Sona) on Monday (July 25), left out the promise he made to teachers when he was still campaigning for the presidency.

While Marcos said in his Sona that the government is working to make schools safe for students and teachers, he only discussed a proposal to institute a program of refresher courses for teachers.

“The indifference to education is evident in the non-inclusion of teachers’ pay [in his Sona]. If we want to address the education crisis, the government should seriously prioritize the welfare of teachers, too,” ACT Philippines said.

The DepEd said on Wednesday (July 27) that the government is considering a proposal to give teachers additional benefits instead of a pay hike, “so they can have more benefits to take-home pay.”

DepEd spokesperson Michael Poa said the department already presented the proposal to Marcos, who told proponents to carefully look into it: “We check if what can be added to increase teachers’ take-home pay.”

This, as Poa stressed that the government could not easily increase the salary of teachers, saying that “if we increase the basic wage of the teachers, if we make it too high, it will really affect the private sector.”

“Teachers might transfer to the government or the private sector may not be able to give an equal pay and may lead to their closure. That’s why what we will be doing is we will be looking into non-basic wage benefits that we can give them,” he said.

Poa explained that as a result of the SSL, pay hikes were implemented since 2019 and that the final tranche, which will be in 2023, will increase the pay of teachers “to the point their salaries are better than their counterparts in the private sector.” 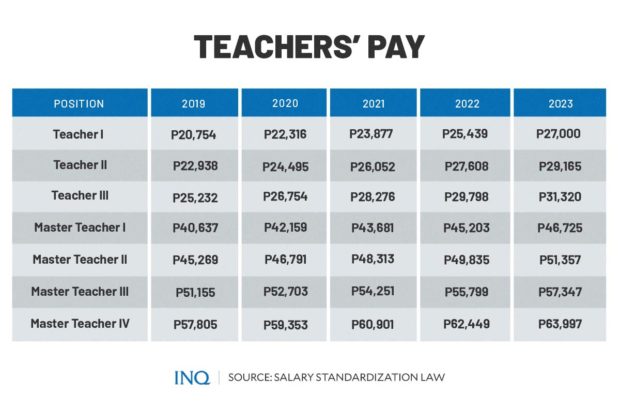 Poa said the DepEd also presented a proposal to relieve teachers of their administrative functions to let them focus on teaching: “To complement that, we will perhaps have to hire non-teaching staff to handle those things.”

This proposal was welcomed by ACT Philippines, stressing that each school should have its own nurse, registrar, custodian, clerks, librarian, security guards and utility workers.

DepEd’s reason for not supporting a direct pay raise, however, did not sit well with ACT Philippines, which said that the lower pay in private schools is not a reason to dismiss the call of public school teachers for a higher pay.

“This only shows how destitute teachers are in this country, more so in the private sector. Being the teachers’ number one employer in the country, the government should set decent standards for teachers’ salaries,” it said. 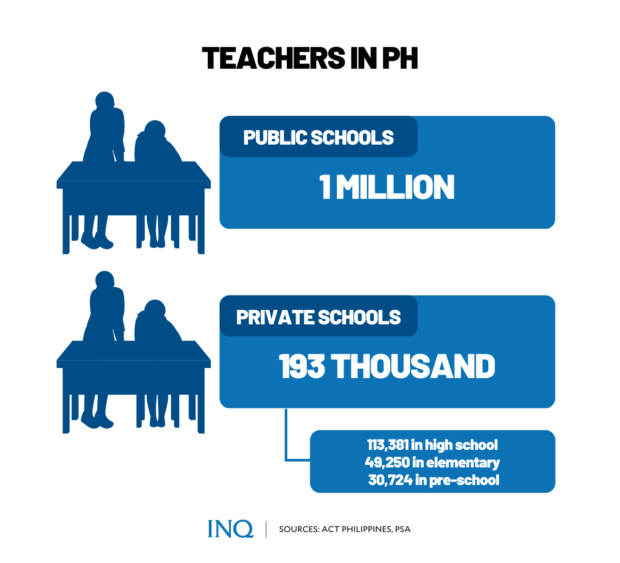 ACT Philippines stressed that 80 percent of basic education schools in the Philippines are public and there are almost one million public school teachers who are deprived of their right to livable salaries because of DepEd’s “flimsy” reason.

Jonathan Geronimo, a private school teacher, said DepEd’s excuse is “divisive,” stressing that “it should never become the reason to deny teachers’ call for a higher pay because in reality, teachers—public and private—are not compensated enough.” 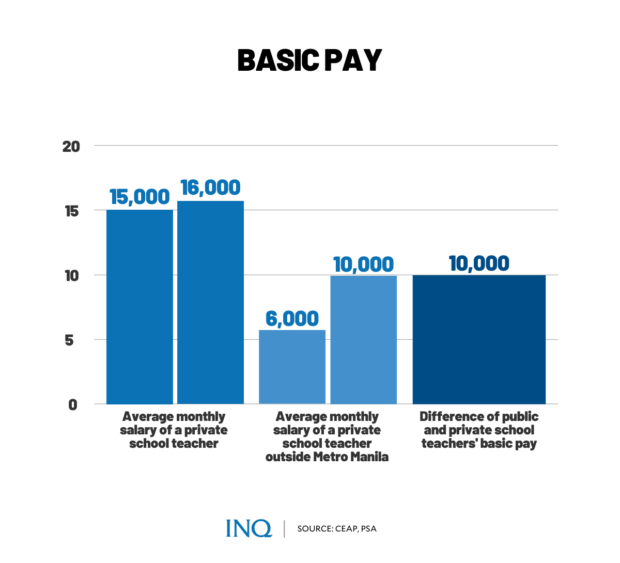 The Catholic Educational Association of the Philippines said in 2018 that the difference of the basic pay between public and private school teachers could go as high as P10,000 a month.

“Is this the kind of salary that the government wants to balance and become its standard for the workers in the education sector?” Geronimo, the secretary general of ACT Private Schools, said.

ACT Philippines said that “the stark fact is that teachers’ salaries have been long left behind by their counterpart professionals in the public sector,” saying that “now is the time to rectify this injustice.” 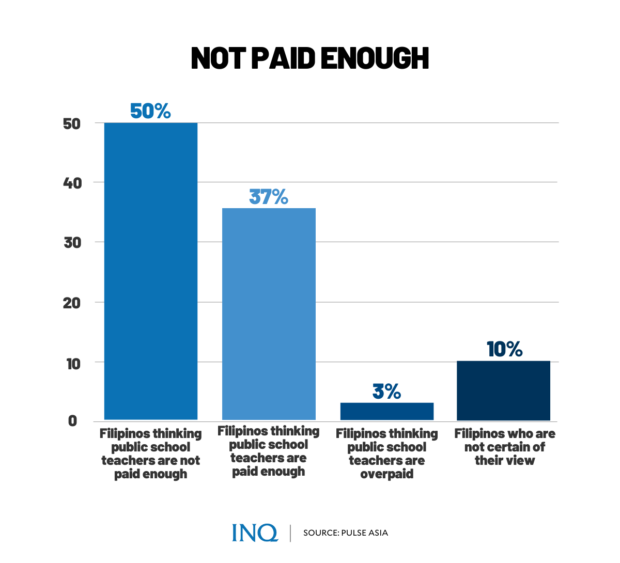 This, as Duterte “doubled” the pay of police and military personnel in 2018 while nurses in public hospitals were granted a salary grade 15 entry-level pay by the Supreme Court in 2019.

It said that for so long, teachers have not been benefiting from overtime pay, overload pay, sick leave benefits, right monetization of service credits, and sufficient and timely release of special hardship allowance, to name a few.

“These are unpaid labor that violate the basic labor rights of teachers. It is only right for the government to pay teachers their benefits, but it should not be used to substitute for decent salaries,” the group said.

ACT Philippines stressed that the government should help private schools in giving their teachers salaries that are at par with the public sector.

RELATED STORY: Teachers use own money, resources as distance learning weighs heavy on them