Teachers use own money, resources as distance learning weighs heavy on them | Inquirer News

Teachers use own money, resources as distance learning weighs heavy on them 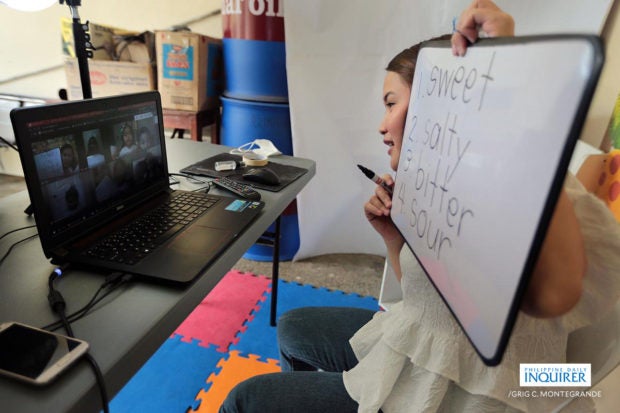 FILE PHOTO: A pre-school teacher holds up a white board in front of her computer as she conducts distance learning session. INQUIRER/GRIG C. MONTEGRANDE

MANILA, Philippines—Not even COVID-19 can get in the way of learning, President Rodrigo Duterte declared in 2020.

But with schools shuttered to prevent transmission of SARS Cov2, the virus that causes COVID-19, the only way for learning to continue was remotely.

As a result, teachers and students—separated physically—would have to resort to two key methods of learning. One is through so-called learning modules which are either delivered to students’ homes or picked up from teachers. The other is through the internet.

But both would put teachers through an ordeal they’ve been familiar with but which the pandemic gave a new dimension to—using their own money and resources.

ACT Teachers Rep. France Castro said the sacrifice being made by teachers amid the pandemic has been filling the gaps in government shortcomings.

A picture of this was formed in a study by the National Research Council of the Philippines (NRCP), an attached agency of the Department of Science and Technology (DOST).

It showed that in most cases, teachers “used their personal resources” on devices and services needed for distance learning.

The study, according to Castro, presented an accurate image of what’s happening on the ground. She said she had met teachers who had even taken out loans to buy devices and get stable internet connection, which are critical needs for distance learning especially in rural areas.

The study entitled “Emergency Remote Teaching Experiences” surveyed 28,859 teachers from kindergarten to senior high school about their experiences with remote learning during the pandemic.

Dr. Celina Sarmiento, of the Philippine Normal University and NRCP’s division of governmental, educational and international policies, made the findings public recently.

It said teachers use their own resources for school-related expenses, especially for distance learning needs like laptops, phones, printers, and internet connection.

High school teacher Lorilyn Sarandi said that “as often as needed,” she uses her personal money, especially to load her prepaid internet service, to keep communication lines with students open.

She told INQUIRER.net that because not all students have internet connection in Isabela province, teachers had to resort to calls or SMS messages to inform children about schedules of distribution or pick up of learning modules.

The same is true in Pampanga province where teachers also had to spend their own money on internet connection for distance learning.

High school teacher Romly Clemente said while the Department of Education (DepEd) has offered allowance for internet, the process to get this was tedious.

According to Sarmiento, most teachers are from rural places where the usual internet connection is mobile data that is “capped per day,” making it difficult for teachers to deliver remote lessons to students.

The research said at least 80 percent of the teachers, who took part in the survey, were using their own money for internet connection, devices or printers.

Out of the 28,859 respondents, barely 10 percent said they did not have to use their own resources. 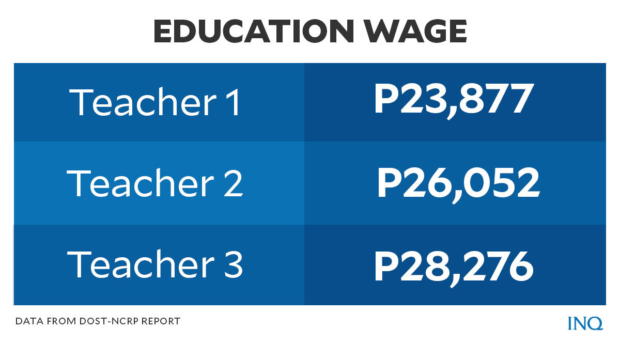 It said smart phones are most commonly used by 84.64 percent of teachers for remote lessons. Laptops are used by 83.97 percent while at least 65.34 percent also use printers. 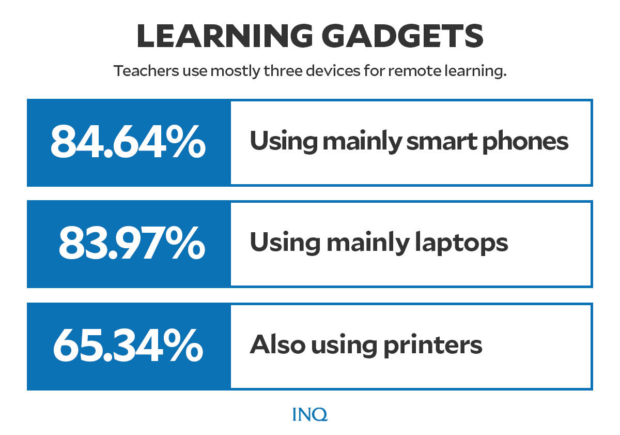 The DepEd, Basilio said, did not heed the clamor for the government to provide teachers with devices and internet connections which are “essential for distance learning.”

In 2020, Education Secretary Leonor Briones said the Basic Education-Learning Continuity Plan (BE-LCP) was the department’s response to education challenges during the pandemic. The program, she said, ensures the health and safety of learners and students as COVID, like Duterte said, cannot get in the way of education.

The program was supposed to set into motion quality education in the absence of physical classes and had been approved by the Inter-Agency Task Force for the Management of Emerging Infectious Diseases, the main government body setting pandemic response policies.

Basilio, however, said the government response was far from ideal and led to disruptions in learning. Devices and subsidies should have been given to teachers ahead, he said. 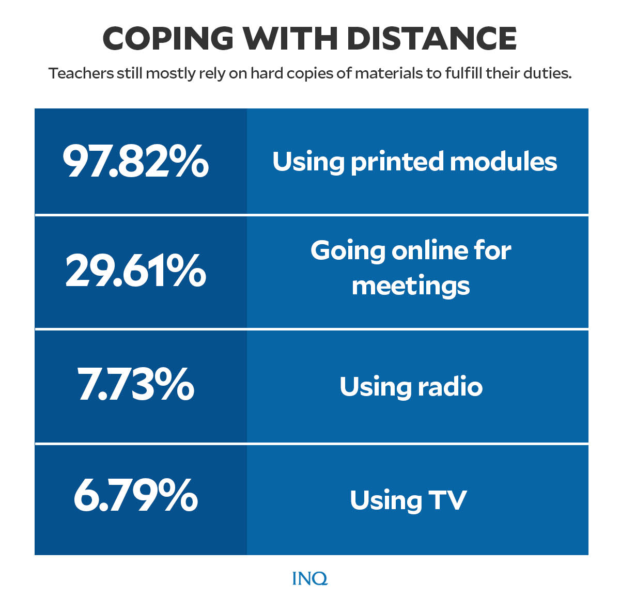 Basilio said that as the last school year ended, teachers did not receive devices and services for learning, describing the lack of assistance from the government as “painful.”

“The DepEd said they will give SIM cards with data allocation, but this is problematic for teachers because it means that they need to have another phone in order to use the ‘single network’ card,” he said.

For Castro, the findings of the research prove that “public school teachers are highly under supported.”

The DepEd received a total of P551.7 billion in 2020–82 percent of the share of the government budget for the education sector which included funds for the Commission on Higher Education and the Technical Education and Skills Development Authority.

“In the last school year, teachers had the greatest sacrifice because they were the ones who looked for resources to print modules and to deliver modules to students,” said Basilio.

READ: PH lags behind in acting on remote learning problems amid pandemic

Castro said the findings were “no longer a surprise” as the government use of resources had long been “skewed.”

The findings, however, were “alarming” if taken alongside a Commission on Audit (COA) report about deficiencies in spending P8.136 billion for the BE-LCP.

The COA report said there were lapses in budget utilization, noncompliance with the Government Procurement Reform Act and issues on procurement, reproduction and delivery of self-learning modules.

READ: COA flags DepEd for questionable use of P8-B fund

It added that the DepEd received P16.105 billion, through special allotment release orders, to provide resources for the distance learning program.

Castro said the DepEd won’t be telling the truth if it claimed having insufficient resources for teachers.

“With the recent COA findings, the DepEd and the Duterte administration simply would rather misuse taxpayers’ money, sleep on urgent programs and projects, and pay no heed to the people’s needs instead of adequately providing support to our front liners in social services like education and health,” she said.

The lawmaker also reiterated teachers’ clamor for pay increase with their inadequate salaries being further drained by expenses for distance learning that the government should have provided.

“If not for the sacrifices of teachers for the blended distance learning. It is only right to increase the allocation to provide enough resources for teachers and learners,” she said.

The NRCP report said 90 percent of respondents believed students needed “remediation,” or more study, “because they learn less these days.”

It added that most students have been struggling with distance learning, too.

“With these factors, there is no doubt that we are experiencing a worsening education crisis in the country,” Castro said.

“Investing in the needs of our teachers by giving them just remuneration, ensuring that they will not have out-of-pocket expenses, and removing teaching overloads and non-teaching duties will be the key factors to perform better in their teaching tasks and provide the youth access to quality education,” she added.

For NRCP’s Executive Director Marieta Sumagaysay, the report has given a glimpse of “teachers’ plight in implementing emergency teaching options.”

“The results of the study convey to the DepEd the promotion of work-life balance among teachers, as well as project systems and strategies that will aid in bridging to the ‘new normal,’” she said.

Clemente said that the government should waste no time and immediately provide the needs of teachers and learners for a safe “back to school” program and quality education in the Philippines.