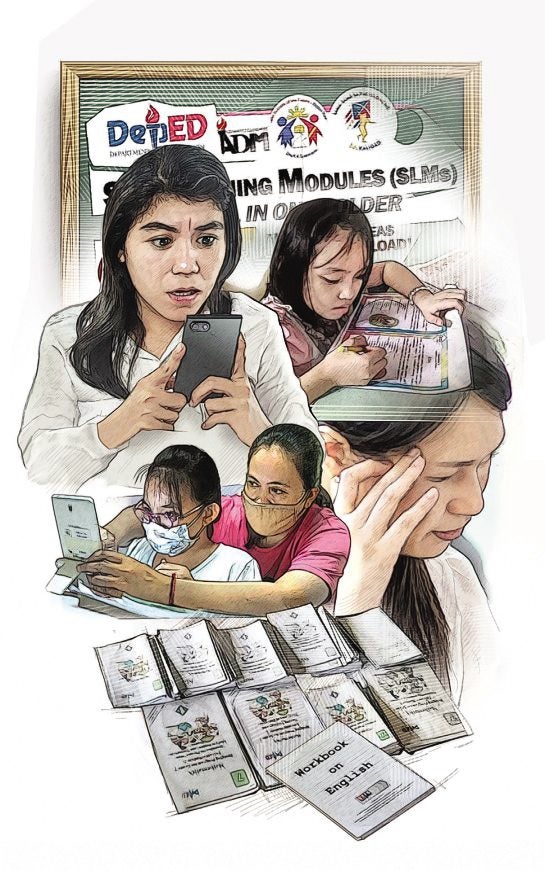 MANILA, Philippines — KJ Catequista suffers panic attacks whenever she receives text messages on her mobile phone from teachers of what could well be simple reminders to parents about their children’s missed deadlines.

Often, it takes hours for Catequista, a mother of three, to finally open the group chat app with other parents, nervously scrolling down the names of students and silently praying that those of her children are not listed among those lagging behind.

“Sometimes, I check the group chat immediately, sometimes I don’t. But when I do, I never find my children’s names on the list, but a simple notification still makes me panic,” she recalls.

Later, she realizes that it seemed as though parents were the only ones carrying the burden of making sure that their children were able to catch up on their lessons.

Six months into the current school year, Catequista found herself late at night finishing an art project, shooting a video for an exam, and cluelessly creating a slideshow presentation as her children struggled to learn independently.

This, she argues, was a result of poor implementation of the distance learning program being pursued by the Department of Education (DepEd), which has insisted that the school year has been “a success” so far.

“I know that as a parent, I have a responsibility to my children. I have to provide for them to the best of my abilities for their learning and their well-being … But the government also has a responsibility on how we can shape learners into better citizens,” she says.

When public schools reopened on Oct. 5, 2020, Education Secretary Leonor Briones was quick to call a “victory” against the coronavirus (COVID-19) pandemic though only 80 percent of self-learning modules had been distributed to learners in late September, teachers reeled from a doubled workload and, most importantly, at least 3 million students were out of school.

Recognizing the economic challenges caused by the health crisis, the Department of Education (DepEd) scaled down its target enrollment for both public and private schools from 27.7 million to just 22.2 million — leading the agency to conclude that it had “exceeded” its goal.As of Jan. 15, a total of 26.6 million learners have enrolled for the current school year — still behind 2019’s figure of 27.7 million.

Students, teachers and parents themselves argued that the distance learning program was inherently flawed due to the DepEd’s lack of adequate preparation.

From Nov. 23 to Dec. 22, 2020, the Movement for Safe, Equitable, Quality and Relevant Education (SEQuRE), a broad network of education experts, teachers, parents and students, conducted three online surveys to assess the conduct of distance learning in basic education.

The survey results, which were released on Jan. 27, showed that 53 percent of the 620 student respondents “do not think or are not sure if they can learn the competencies set by the DepEd for their grade level under distance learning.”

Only 42.7 percent of 1,207 parent respondents were confident that their children understood their lessons, while 31 percent of 1,395 teacher respondents believed one to three in every 10 of their students were not able to keep up with their classes.

Liza Marie Campoamor Olegario, an education psychologist and the research head of SEQuRE, cites flaws in the delivery of remote learning in the country that led to more students struggling to keep up with their lessons.

“Primarily, the country is not used to distance education. The government’s peg in continuing education amid a health crisis was distance education, but we have to remember that we are not prepared for emergency remote learning,” Olegario says.

A week into the distance education program, netizens immediately noticed that self-learning modules were littered with grammatical and typographical errors, along with tasks that were nearly impossible to accomplish by young students.

Student burnout quickly became an issue in just a matter of days: Parents were alarmed to see their children weeping, skipping meals and experiencing mental breakdowns while straining to accomplish the activities in their modules.

Cara Fernandez, a psychologist and a professor who specializes in treating cases of anxiety, depression and burnout among young adults and teenagers, explains that the common story of her clients was that they were stuck inside their homes for more than a year without a chance to interact with friends in person.

Social interaction is crucial for children of school age who have gotten used to spontaneously sharing their problems with their peers, she says, and suddenly taking away this important factor in their development can make their mental well-being suffer.

“Their developmental task is friendship and social interaction. To not have that kind of face-to-face social interaction and engagement makes a difference,” Fernandez, the executive director of Ateneo de Manila University’s Bulatao Center for Psychological Services, told the Inquirer.

And as a result of failing to understand and empathize with the emotional struggles of children, tensions inside the household eventually grow.

This was especially true for Catequista and her children, who often fought over the smallest things, from a vague text message she received from her daughter to a missed deadline in school.

Catequista, who lives in Rodriguez (formerly Montalban), Rizal province, and works at an office in Quezon City, often comes home exhausted after being on the road for nearly three hours.

It did not help, she says, that she had to assist her children in doing their assigned tasks for school until dawn and wake up three hours later to prepare their meals before leaving for work again.

“We can’t really avoid the tension. When I’m cranky and I say something out of line, they become angry at me, too. It does not help the mental health of our family,” she says.

Progressive groups point out that the effects of distance learning do not end with quarrels at home or student and teacher burnout.

Among the most alarming impacts of distance education reported by the youth group Samahan ng Progresibong Kabataan (SPARK) and the Alliance of Concerned Teachers (ACT) were the cases of suicide among learners and educators.

In October 2020, SPARK monitored at least 13 cases of students who took their lives, saying these were linked to the pressure they had to endure in trying to accomplish their self-learning modules in time for the weekly deadline, along with their difficulties in confronting the pandemic.

ACT reported the case of a teacher in Leyte province who committed suicide, also in the same month, which it said “demonstrates the magnitude of stress that our teachers endure at present.”

After reportedly conducting its own investigation, the DepEd appealed to the public to stop linking the deaths of teachers and students to pressure and difficulty in distance learning, while saying it was “saddened” by the incidents.

It noted that it had received police blotters, incident reports and statements from the bereaved families, and clarified that “none of them referred to distance learning as the primary cause [of suicides].”

While the agency recognized these mental health issues in October last year, it appealed to schools “to support the mental health of our teachers and students” after releasing a memorandum implementing “academic ease” in schools.

Among the recommendations of the DepEd’s Curriculum and Instruction Office was to make some activities in modules optional for learners.

Fernandez agrees that this measure was a way of allowing students to “choose their battles” and determine the most important things they had to learn, as attempting to accomplish an overwhelming number of tasks may diminish their psychological resources.

In order to prevent the mental and emotional suffering of students, she cites the need to ramp up mental health initiatives in schools, with interventions to be spearheaded by the DepEd such as conducting talks on mental health in public schools and assigning psychologists in every district who can look after students with high anxieties.

“We need to make the children more resilient, especially now in this challenging time of uncertainty and vulnerability,” Fernandez explains.

But the root of these struggles can still be traced to the many flaws of the government’s distance learning program, according to Olegario.

Even as the DepEd insists that it has adequately prepared for the first nationwide conduct of remote learning, Olegario stresses that systemic changes were still needed to move forward and make sure that no student continues to suffer.

“We have to learn authenticity. The learning has to be meaningful; it should not be limited to reading and answering. What’s important here is the principle of reflective learning,” she says, adding:

“We should be ready for emergency remote learning because this is not the first time that we will be having an emergency. Other countries have prepared for this, and we’re lagging behind.”