Bulacan Katipunero kin up in arms over statue of hero 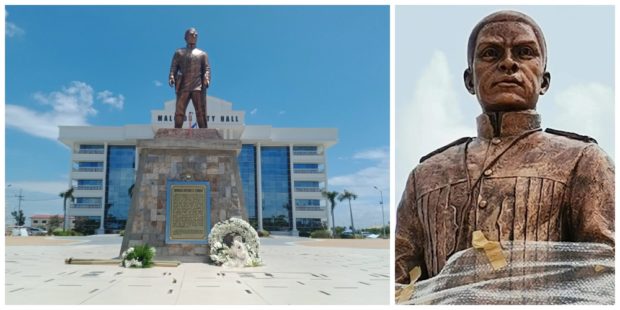 The 7-foot tall statue of General Isidoro Torres, who was nicknamed “Matanglawin (Hawkeye), was unveiled on Friday (April 10) in front of the newly built Malolos City Hall in Bulacan province in time for his 155th birth anniversary. But the image of the homegrown hero failed to capture the face of a “gentleman soldier,” according to his descendants. (Photos by Carmela Reyes-Estrope)

CITY OF MALOLOS , Bulacan, Philippines — Instead of praise, a monument that was unveiled in honor of a Bulakeño revolutionary hero on his 155th birth anniversary drew a lot of flak from descendants who said it barely resembled him.

A 7-foot-tall statue of General Isidoro Torres, who was given the nom de guerre “Matanglawin (Hawkeye)” when he joined the Kataas-taasan, Kagalang-galang Katipunan ng mga Anak ng Bayan (KKK), has been installed at the People’s Republika Park in front of the newly built Malolos City Hall on MacArthur Highway.

But after it was viewed by his family before the unveiling on April 10, they tried to stop the inauguration of the monument.

“The [face of the statue] resembles a madman instead of the face of a gentleman soldier of his time,” lawyer Toppie Torres, the hero’s great granddaughter, said in an interview.

For this reason, she wrote Mayor Gilbert Gatchalian on April 6 to ask that the unveiling be postponed, saying the statue was being mocked on social media.

The statue’s designer, Isagani Giron, a Bulacan historian and president of the non-government organization Bulacan Salinlahi Inc., said that it was his idea to make the general look fierce to portray Matanglawin as a warrior and revolutionary.

The features of the statue, he added, were based the image of Torres when he was the gobernador de la plaza of Gen. Emilio Aguinaldo’s revolutionary government from 1898 to 1899.

Giron said he had conceptualized the new monument and also selected the artists who built it.

But according to Toppie Torres, she had offered to spend P200,000 when the statue was being constructed to make sure it was done right.

“We in the family were all dismayed when we saw it just before it was unveiled,” she said, adding that their complaints were not heeded.

In 2016, then Malolos Mayor Christian Natividad approved the construction of a 15-foot-tall statue worth P700,000. But it was later downsized by Gatchalian to 7 feet because of budget limitations.

The Torres family had asked the city government to include them in the project’s consultation, but the hero’s great granddaughter claimed their request was not entertained.

Toppie Torres also said she had participated in the bidding for the project but failed to win the contract.

The ceremonial unveiling of the statue was a low-key affair because of the prevailing enhanced community quarantine in Bulacan province. Wreaths were laid at the foot of the new monument, as well as at the Malolos Proper Monument, the marker in Barangay Matimbo which is Torres’ birthplace, and at a monument in Matimbo Elementary School.

General Torres was known to have led the Katipunan in the battles of Bagbag Calumpit, San Rafael, Binakod and Barasoain.

He was present at Biak na Bato when Katipuneros tore up their cedulas (residence certificates) in defiance of the Spanish colonial government. Torres was also a delegate to the Malolos Congress, which organized the country’s First Republic.

Historian and published author Benigno Jaime Corpuz said that Torres was also known for demanding that his heart be buried at his birthplace. He died on Dec. 5, 1928.